It's Only A New Blog From The Slimming World Files!

Ah...hello there...remember me? (Again). I've been slightly AWOL from blogging (again), and this has partly been due to tiredness (again) and party due to off planny ness (again). I've also been suffering from a hideous headache from hell which has only just started to disappear after close to 3 chuffing weeks, the finale of which led to me being off work for practically a whole week whilst I fed myself painkillers every 2 hours. On my GP's advice of course, it wasn't quite so bad I wanted to end it all - although it came close at times O.o

Anyhoo, here I am once more, ready to regale you with the oh so exciting tales of a SW girl trying to get herself back on the bus after a rather wayward few months. I really am starting to think that calling target wasn't my cleverest idea, but you can't undo what is done, and so I'll just have to keep plugging away to get rid of the excess weight I've gained since then, which, according to my scales is now perilously close to 2 stone. Yuck. I gain SO easily it's insane, all the more reason to stay on bloody plan eh? I do wish my head would co-operate....

....but I digress slightly, you know the issues I've been having, but guess what? Today (Sunday) marks FOUR days on plan, and it's been a long time since I managed that! So how has today shaped up...let's have a looksie shall we... (I really wish I could make one of those swirly, timey, whimey things they have on TV when going back in time).

(or nick one off t'interwebz....apologies for the rather epilepsy unfriendliness there)

Today started pretty late really, for me anyway. Hague was up and out by 9.30 to go and kick people in the head and so I took the opportunity to sleep some more, setting my alarm for midday (I'm on nights next week), and then again for 12.30 before realising that if I wanted to see Hague's fight in his skills bout today I'd better get my butt up, fed, dressed and out and so out of bed I got, and downstairs I headed to feed the animals and then myself. 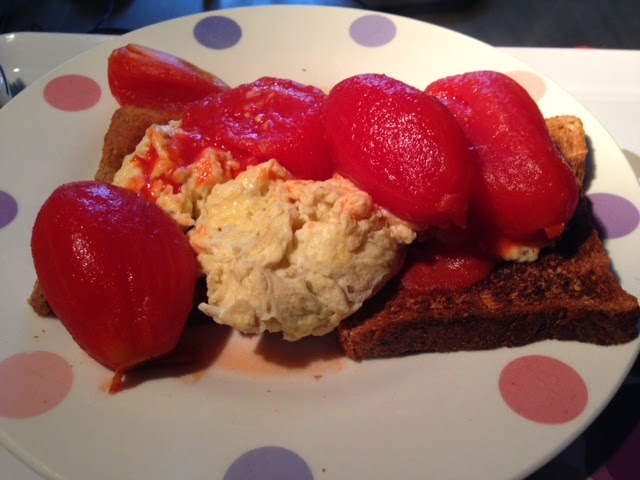 A five minute breakfast there of scrambled eggs on toast with tomatoes. Whilst eating I found this wonderful picture on the magical interwebz and immediately shared it with TOK who needed cheering up. Impossible to be sad after seeing this methinks. 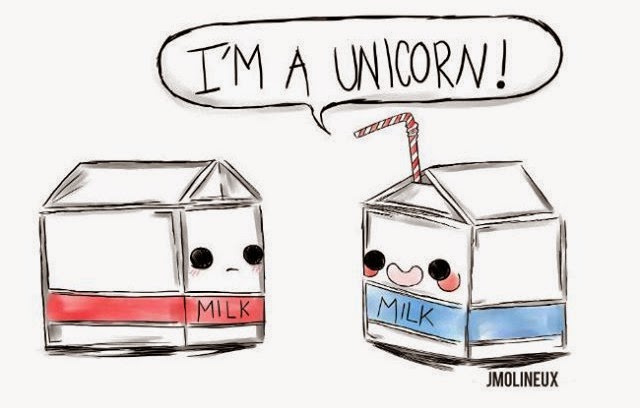 I then got dressed and headed out to see Hague do his kickboxing thang, via Starbucks where I decided to splash out 7 syns on a Chai latte (they're 13 in total, but I've knocked off 6 for a HeA of milk). Mind you, it was fun finding that out as the SW mobile website was having a bit of an off day, hopefully it's sorted now! I arrived at Legends and found Hague watching the littlies fighting, so got myself a seat and made myself comfy. I'd been advised by himself that he'd be fighting at around 2ish, and so didn't bring my tablets. Unfortunately, lots of extra bouts had been added, and so despite keeping my fluids up, and having a nice healthy snack... 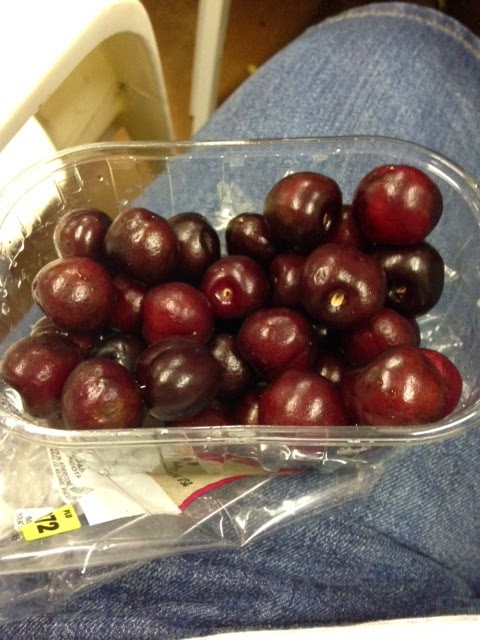 My head had still took a turn for the worst by the time Hague got into the ring. I still managed to video him though, and take a few pics, mostly as I knew it was nearly over and I could get home and pop more pills! 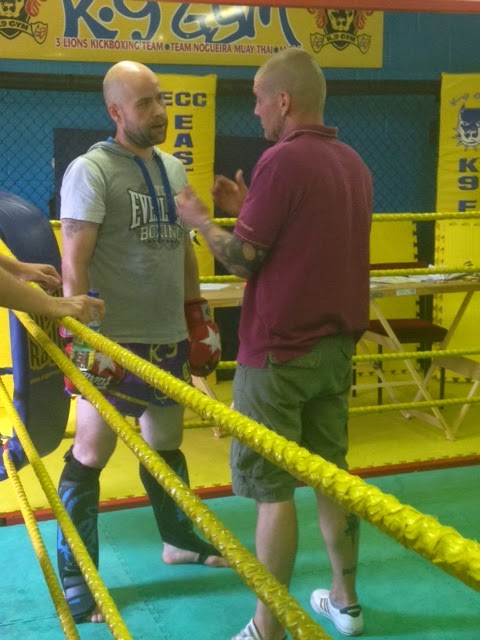 That's my man with his trainer, Dave *proud*

Getting home, also meant getting fed, as by now it'd been hours since he'd eaten and not quite as long, but still long enough since I had and so we got a Quorn roast in the oven and whilst we both had broccoli, he had roasties and I made a potato salad with leftover boiled potatoes from yesterday. 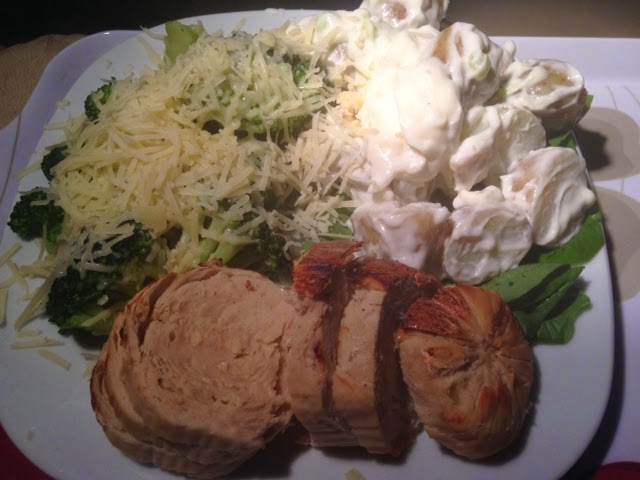 Is it wrong to really, really enjoy your own food? I do adore my potato salad, and it's so easy, I use half extra light mayonnaise and half fat free natural yogurt (2 tbsp of each in that lot), a wee bit of mustard powder, spring onion and seasoning and it really does taste rich and delicious! I was a bit full after that, but after a natter with TOK I decided to get some oats soaking for some magic pancakes whilst we watched some of the Commonwealth Games boxing before headed out to see the fireworks.

I don't think either of us realised quite how far away the end of Great Yarmouth is when we started out. I thought that leaving at 9 when the fireworks were at 10 was rather early, but after one aborted start when Bayleigh started playing up so we took her home again, we got there at 9.57! I even took us a little picnic! 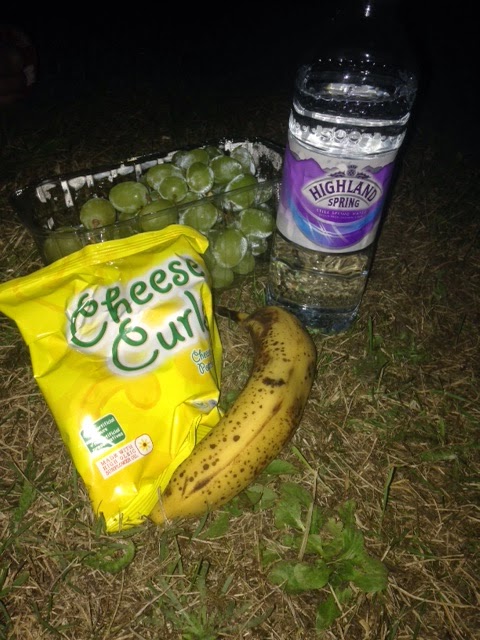 We found a little grassy patch where we could sit on our own, snuggled up and watched the fireworks whilst having a lovely old chat and some munchies. It was a bit of an off the cuff thing to do, but it was so lovely, even with the 5 mile or so round trip to get there and back! 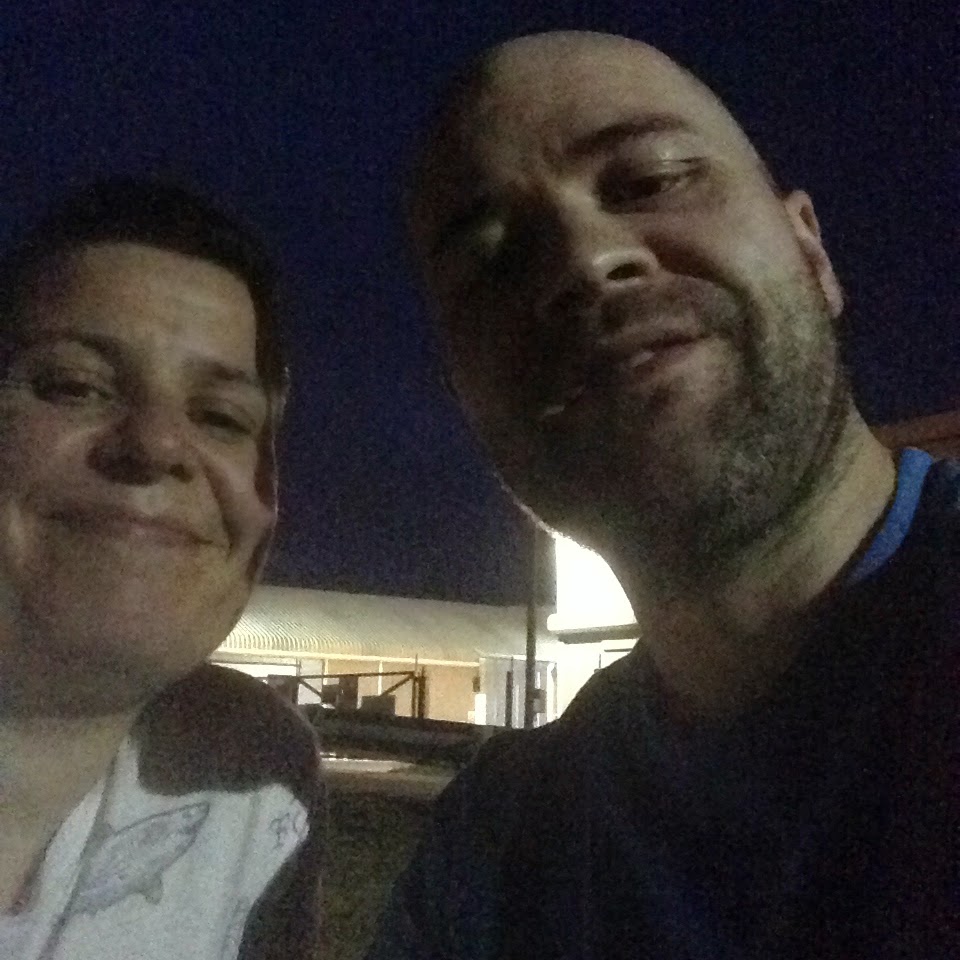 Excuse the faces, think this was about the 4th attempt to take a selfie!! You'd have thought I'd be an expert by now eh? ;o) By the time our weary little legs reached home we were both peckish again, and so I turned my porridgy yogurt mix into pancakes, whilst Hague made possibly the garlickiest garlic bread in the universe! 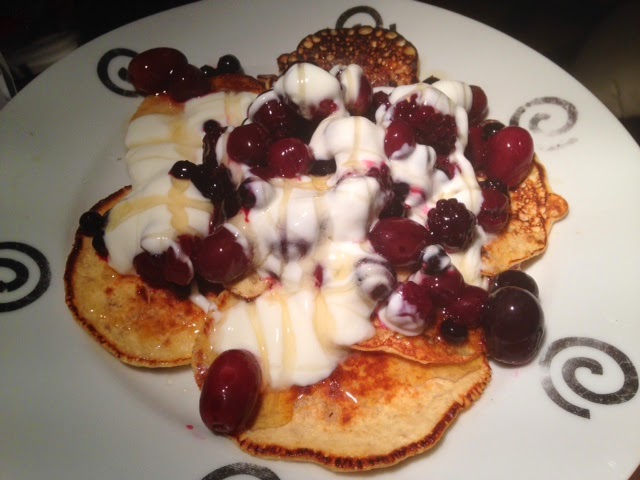 Yes, this is in fact diet food! I'd forgotten how lush magic pancakes were! With those eaten, and a bit of relaxing done after our busy day, well, mostly Hague's busy day but I did walk a lot...it was time for bath and bed. I'll be honest, I wasn't going to blog, I was all relaxed in the bath when I just felt really awful about not blogging again, and so here I am, at gone 2am, sitting in bed telling you what I've eaten...oh the glamour hehe!

So there we have it, my first blog in bloody ages, but hopefully I'll get one done more regularly now. I'm feeling a bit more secure on plan, my head isn't trying to murder me and even 12 hour shifts shouldn't really stop me from letting you all know how my day has been eh?

There have been other nice things happening whilst I was all missing...me and Hague rode up to Hembsy (9 miles up the coast) and  back on a glorious day during my week off. My Nan celebrated her 97th birthday and we had a family meal which meant time with my lovely nieces, whose Sport's Day we also managed to attend during my week off. I've had a girlie night in, and have even managed to bath the JadeyPuss, alas, all things that will be missing from my blogging history :o( Must do better Karen!

I will sign off with my 7943098520th attempt at a list of positive things/happy days as I seem to start and stop them rather regularly. I figured that if I signed off my blog with 3 positives a day it might encourage me to do the positives, and also to blog, so here goes with today's, well Sunday's....you know what I mean!

1) I've managed a blog!
2) Jadey is now incredibly soft, fluffy and pretty.
3) Sitting on the grass, smelling the sea air and watching the fireworks with the man I love.

Not too shabby for a starter :o)