Monday was  rather odd. Fabulous bits and very horrible bits, with work as the cherry on top. The rather bleaurgh cherry.

I woke up at 5am. This was despite me going to bed at 2am, feeling shattered and hoping to sleep until my alarm went off. No such luck. As I spent an hour  trying to nod off again I thought I might as well get breakfast prepped, and so went downstairs planning to soak some couscous and get some blueberries out of the freezer. Alas, the couscous monster had demolished the pack of toasted goodness I thought was still in the cupboard, and so I just got the blueberries out, made a cuppa and headed back upstairs. Just as I was almost drifting off again at 8am, the sounds of work being carried out on next door’s roof stopped any of that nonsense right in its tracks. I really am doomed to be Zombie Girl this week I think!
At least when I got up, breakfast only took about 2 minutes to prepare. 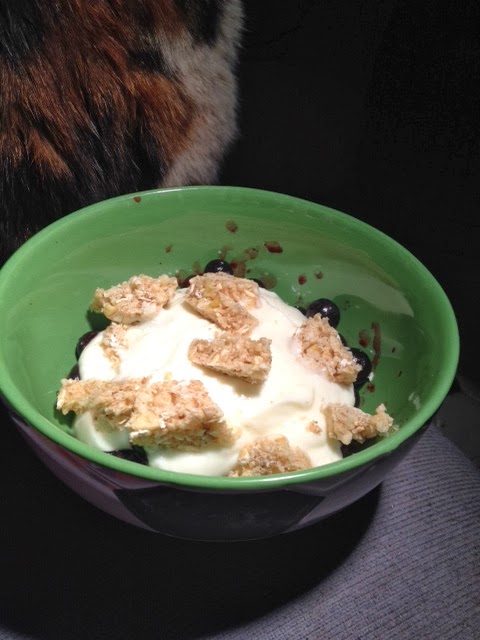 With that eaten, I got myself prettified and headed out to meet Claire (my Consultant) as we were both going to be on our local radio station, Harbour Radio. We had a cheeky Costa (skinny gingerbread latte of course) and then headed off to the studio. I had a fabulous time, it was such fun being on air, and Bigg Nevv (the DJ) was hugely complimentary about how I looked. I managed to give TOK and Doug a shout out – I wasn’t being mean, Hague couldn’t listen – and we were on for an hour, much longer than planned. In fact, I might even be going back next week! I loved every minute! 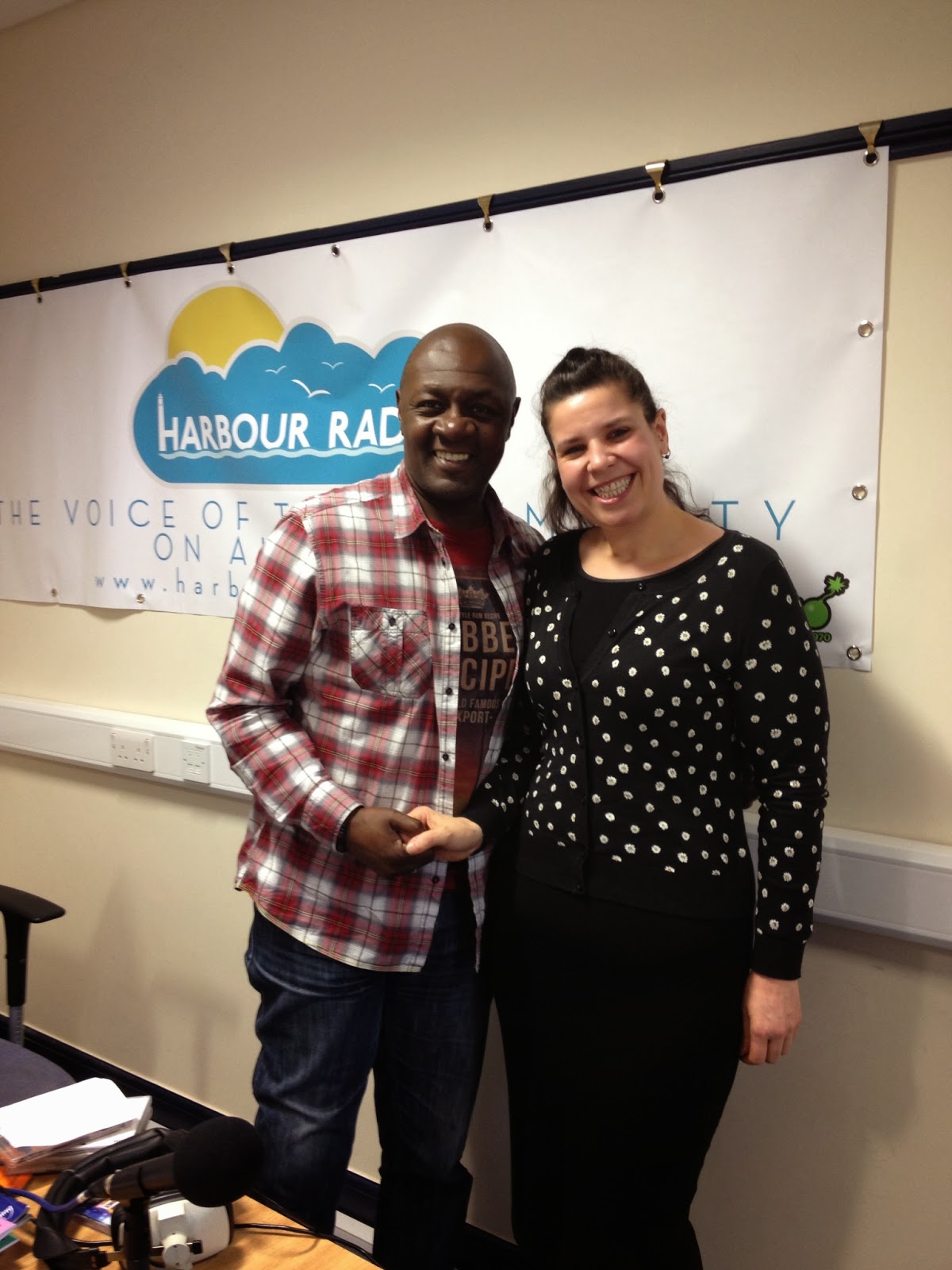 When I got home, it was back down to earth time. I was shattered, and got myself tucked up in bed. At first, it was lovely and quiet and I managed to doze off, but all too soon it was noisy fecking builders a gogo and it wasn’t until they’d finished up at 4 that I finally got some sleep. Boy did I not want to get up at 7, but needs must and so up I got, got myself, and the poor animals fed and headed out to work. No superfree. I am a Bad Karen. 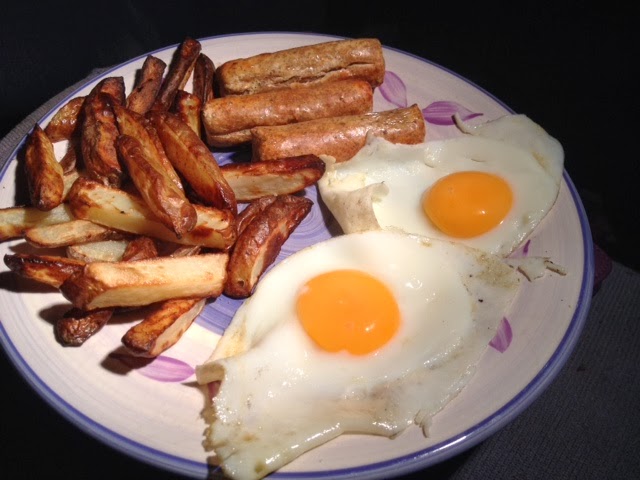 Work was a pain, with me being shuttled between different machines to cover breaks and shortages – at least it made the shift go quicker, fuelled by this pile o’noms. 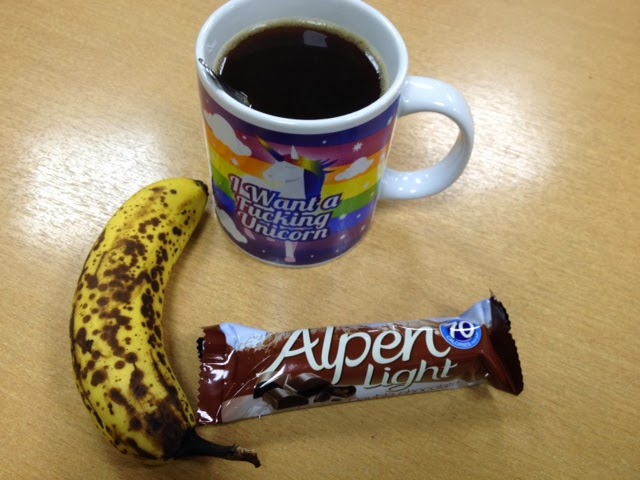 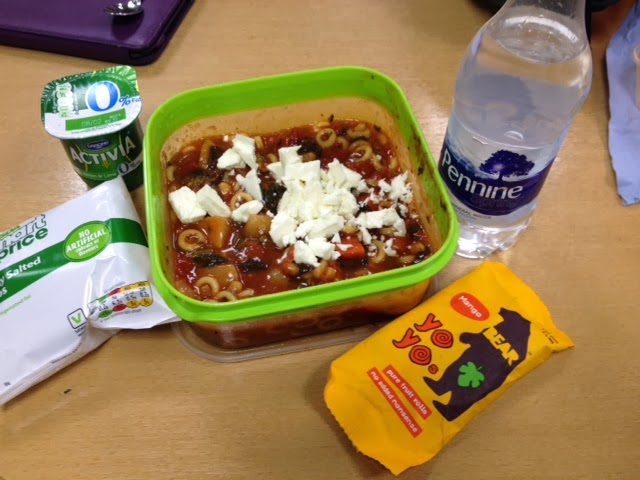 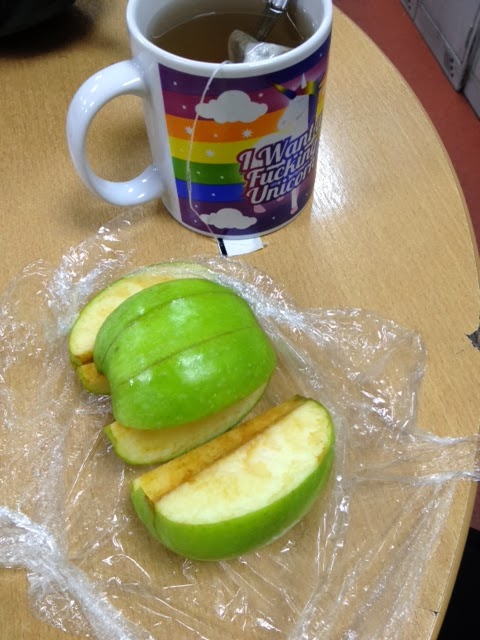 My lunch was homemade Mitchystrone soup, it shall be making many appearances this week as I made a slow cooker full! Monday's was topped with Feta :o) I found some Bear YoYo's too, so they made a rare appearance.

I got home, pondering whether or not to have a bath, and in the end, having a nice soak won., along with some slightly different nommage. 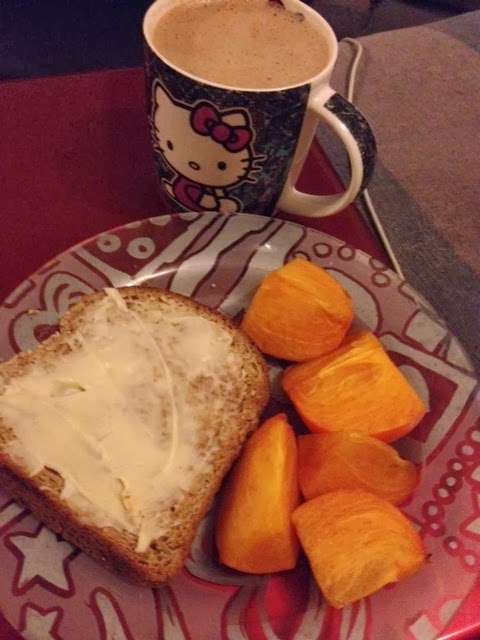 I watched the Ch4 documentary, My Baggy Body whilst I was in the bath. Obviously, with my loss being comparable to those featured, I thought it was worth a watch. However, I was quite disappointed. All the people shown still had weight to lose, in fact all of them were still in the obese category.  With the exception of Pauline (and Fred) I felt the others shown should have been encouraged to reach a healthy weight first, rather than rushing into surgery. The operation looked hideous. The guy was left with huge scars and strange dents and bumps on his body. In my humble opinion he had looked better before. In fact, the documentary has made me think twice over whether I do indeed want the surgery I thought I was desperate to have. An eye-opener that’s for sure. It also showed just how much weight loss needs to be tackled in your head too. Sarah had had gastric surgery, attended WeightWatchers and was still obese, attributing her lack of happiness to her size and loose skin. Something that she seemed to make progress with after therapy, showing that it’s not as easy as eat less and move more….

Perhaps one of these days I’ll share with you MY baggy body, as it most definitely is one – but as friends, family, work colleagues and strangers all read this blog, I’ll have to be feeling very brave to put up an underwear show to display what clothes currently hide quite well!
Anyway, after that, it was of course time to settle down, which I managed to do, despite the banging and crashing on next door’s roof!

I’d set my alarm for 4.30 today, giving me plenty of sleep, even with me not nodding off until around 9. I woke up earlier than that though, around 2.30, but dropped back off to sleep, and then, as I was so comfy, decided to stay in bed until the last possible moment before heading to weigh in, getting there just before 6! I was just in time for the scales though, and last to weigh in, and I had a loss of 5lbs. Very pleased with that as I’d been so upset the week before. So I’m still 2½lbs away from my lightest, but definitely closer than I was.
Whilst I was there, I had a look through my weigh in book. Anyone who reads my blog regularly will know how my body fights against this weight loss malarkey with annoying gains far too often for my liking, so I thought I’d work out how much those gains were – to see how many lbs, in total, I’ve had to shift….

What do you reckon??

45 chuffing lbs! That’s 3 stone and 3lbs on top of the “total” of 11st 4½lbs I’ve dropped from 25st 2½lbs to my current weight of 13st 12lbs. So I’ve had to lose over 14½st because my body likes to randomly gain weight for no bloody reason. How frustrating is that? If my body just lost, like it should, when I stick to plan, I’d be at target by now….

I shall not dwell on that though, as the very thought of it got me rather angry. Not at myself as such, as the gains are rarely my fault, more at my body’s desperate desire to stay squishy. Dearest body, you are going to lose that battle :oP

Once I was home, I had a zillion things to do, as Hague is still up in Barnsley, so whilst on the phone to him, I had to unload the dishwasher, load it again, sort the animals out, get my dinner sorted and get my lunch ready for work. No rest for the wicked! I eventually got it all done and got my dinner inside me just in time to get myself changed and out the door. 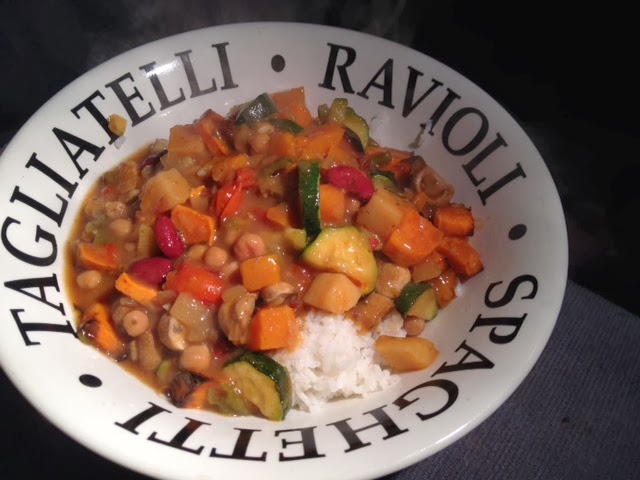 It needed to be quick, and so it was just some chopped veggies (courgettes, tomatoes, sweet potato and mushrooms) bunged in the oven whilst the rice cooked, then I nuked a tin of the Asda smartprice vegetable curry and stirred the veg in. Job done, and all for a single syn.

Work was hectic, my feet didn’t touch the ground for the first hour and a half, and because of the configuration of lines we’re running, breaks are hard to come by due to us not having enough people to cover. Such fun. My breaks may have been at odd times, but I did at least get the allotted three, and this is what I put away during them. 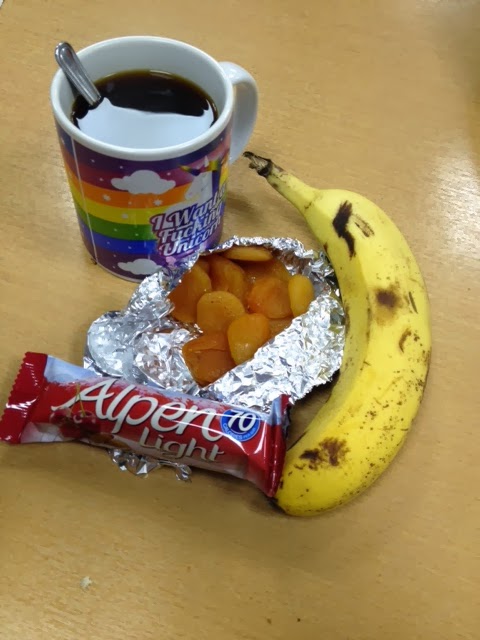 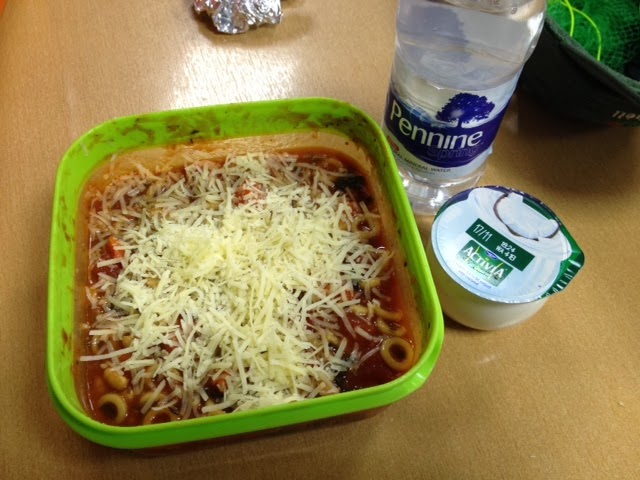 Yet more Mitchystrone there, topped with Cheddar today, only accompanied by a yogurt as I'd had quite a bit for my first break - please don't look too closely at the yogurt though.....I'm a bugger for ignoring dates on them ;o) 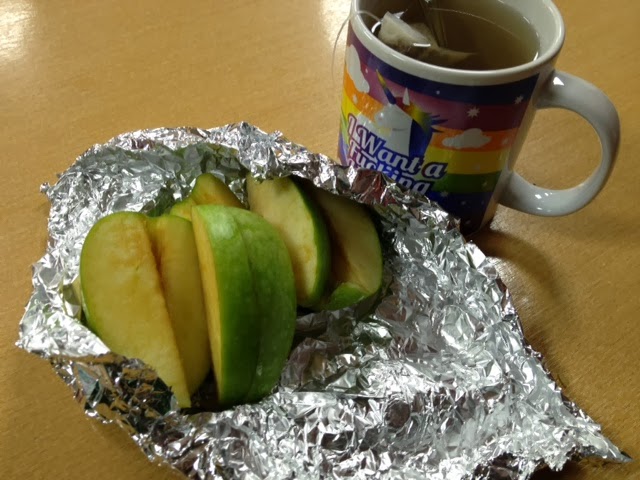 All dutifully photographed for my blog and my Pact app, which paid me $0.30 for each portion I ate last week – not bad eh? After a mad, annoying, frustrating start, work settled down quite well, the last hour even went quite quickly and soon it was 6am and I was out in the drizzle, heading for the car and then home - via Asda as the StinkPuppy AKA Bayleigh Boo had no food. Then it was the usual routine of a nice soak, with some snackage before bed, although bed has been delayed slightly whilst I get this blog typed up and polish off a hot chocolate. 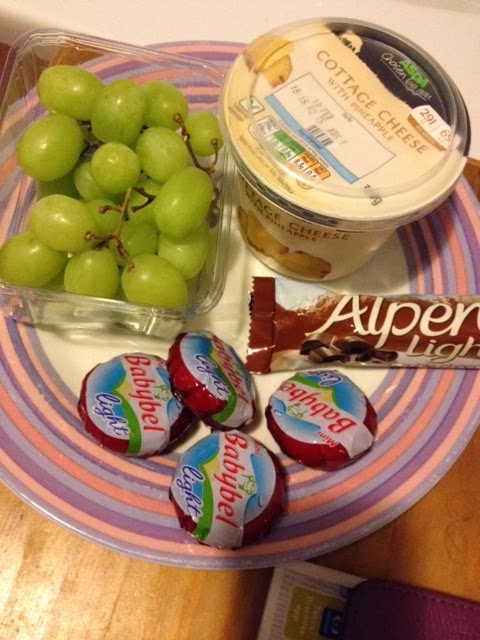 So another day done and dusted, another day closer to the weekend and today (Wednesday) is the day that Hague is finally home! I've missed him so much - and not just because I've had to cook for myself. This is the longest time we've had apart since we moved in together over 5 years ago. It sucks not having him here! Anyway, enough sappyness, it's not even Valentine's Day yet, and it's definitely time for me to try and sleep before The World's Noisiest Roof Workers descend upon next door!