Just for a change I didn't have the best night's sleep. This time it was the combined efforts of Hague's cold and JadeyPuss that kept me awake though, poor Hague couldn't get comfy and was snoring and sniffing for most of the night, and somehow Jadey managed to get upstairs, and she then decided to try and sleep on my neck, head, arm and generally anywhere that was highly uncomfortable for me. Not the most restful night then.

We gave up the ghost at around midday, mostly as Hague had his kickboxing. I was undecided whether to head into town or let the sofa glue take me and I had pretty much made the decision to rest up when I sorted out my breakfast. 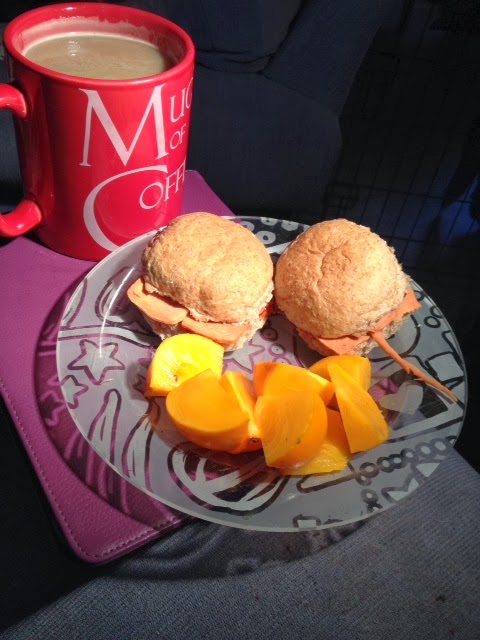 Quorn bacon rolls with a tbsp of ketchup and a persimmon. Nothing too heavy, mostly as I couldn't be arsed to do anything more involved, although I then decided that rather than just sitting on the sofa I'd head out into town. A little NSV to share first though - many, many months ago a lovely Facebook friend bought me a present, a rather lovely Elmo t-shirt. It was always a slim into purchase, but when it arrived it was teeny tiny, and so it's taken a long old time, but today, I got into that t-shirt. Thank you so much Joan, I love it! :o) 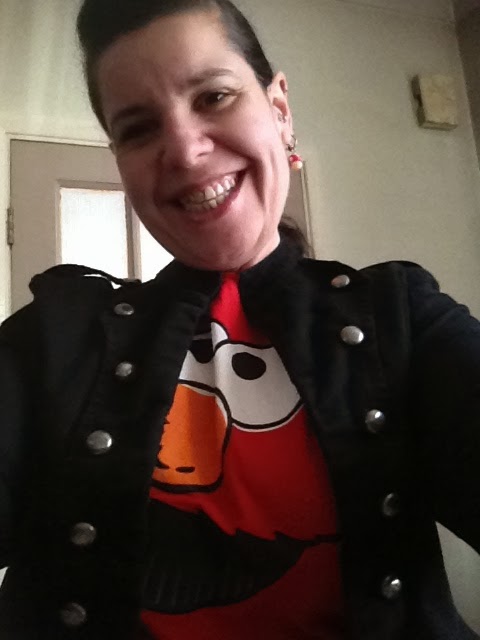 My visit to town was rather swift, with me just picking up a recipe journal to keep all my favourite SW recipes in as I keep losing them before I had to go and get Hague, and then head to Aldi to get the few bits and bobs we either forgot, or Asda didn't have. Once we were indoors, we both got ourselves fed before heading out again, just to town once more, but I really didn't want to stay indoors despite it being freezing, and spending 30 minutes outside just isn't good enough! 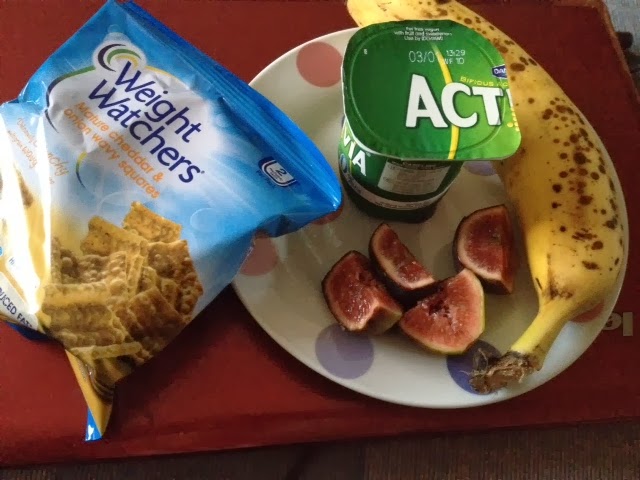 We had rather a lovely mosey around town, and I picked up several bargains, including a Wii sing and dance musicals game for £1.99, this amazing mug for just £1... 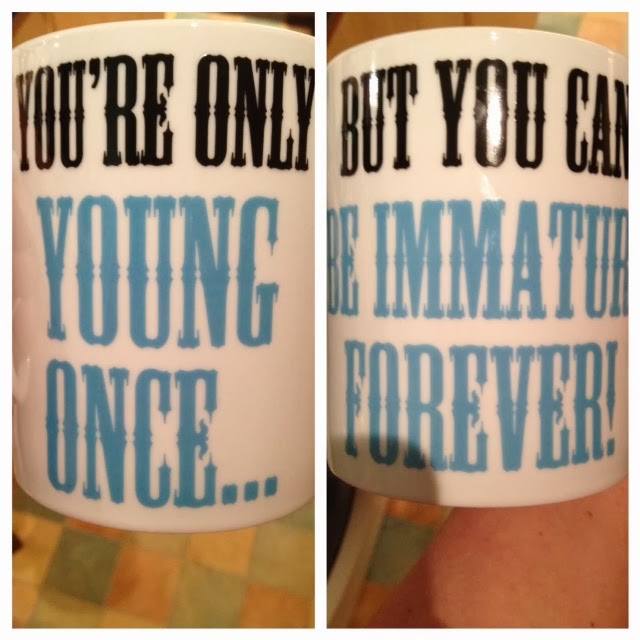 We also finally picked up the first season of The Big Bang Theory on DVD. We seem to be the only  two people on the planet that haven't really seen much of it, and as most of the people I like most seem to love the show, me and Hague felt that it was about time we took the time to watch a few to see what the fuss is all about, and for £4, we figured it was rude not to splash out! Laden down with all our goodies, and freezing our bits off, we headed back home and once more decided it was feeding time! 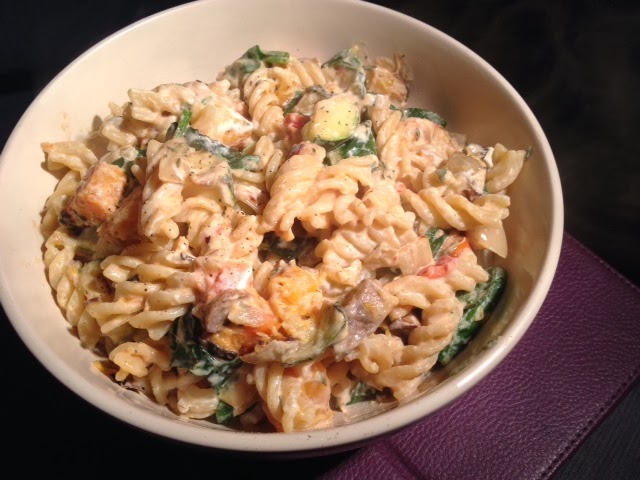 I've really had the CBA's today when it comes to food, so roasted veggie pasta it was, with a HeB worth of extra light soft cheese stirred in. We then settled down to watch Big Bang Theory, and so far (one disc in) it's got a rather large thumbs up. We nommed on grapes whilst we watched. 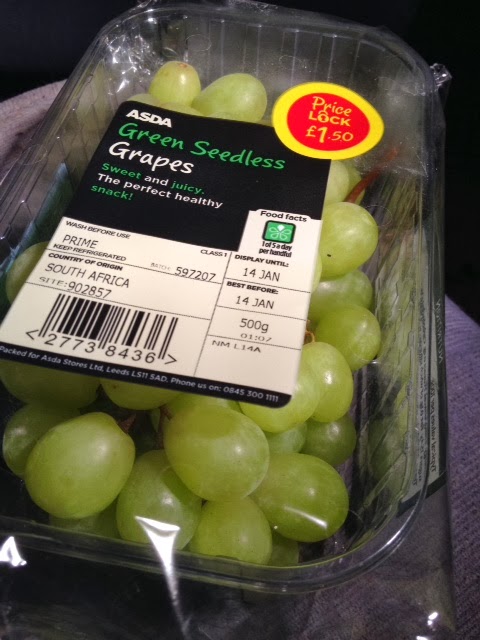 By the time we'd enjoyed the first disc we were both hungry again, and whilst I debated whether to have something rice based or burger and chips, Hague did himself some tuna rolls. I then went a bit leftfield and decided to have a jacket spud....neither rice, or burgery based. Oh well. I think it was the minimal effort appeal again! 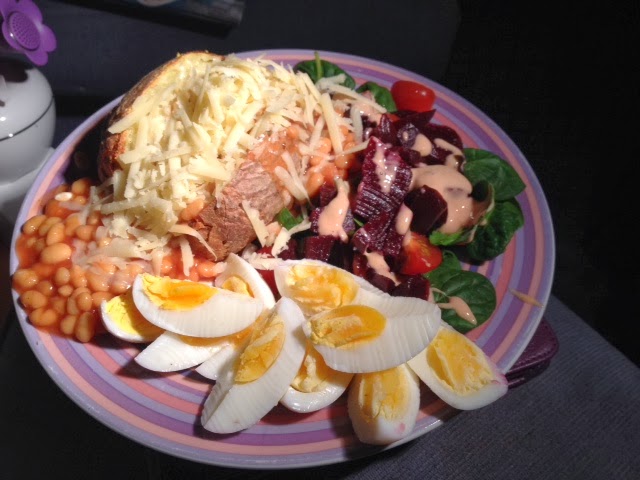 Low effort and rather eclectic, but it did the job of filling me up, so now all that needs to  be done is to sort out the various animals with food and then we can head up to bed to watch more of the adventures of Sheldon et al. Yes, we are converts already :o)

It seems like it's been a really long day, but as it's not yet 11pm, it really hasn't been. It's been a nice day though, but I think the lack of sleep last night for both of us is meaning an early night is needed, Saturday or not!

I might be brave enough to unwrap Jullian Michaels tomorrow too....maybe....