Okay - lets see if I can actually get a blog up today shall we? See if Blogger is kind enough not to nom on all my hard work and just regurgitate a select part of all my musings and food eh? 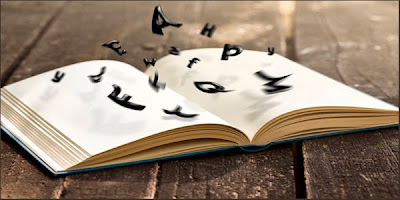 Sunday was the  birthday of the always wonderful Hague, 37 years young, so he's almost caught me up again ;o)

We woke up nice and early as he was seeing his boys, and as we spent the night in a hotel, breakfast was courtesy of our shop at Asda the night before. 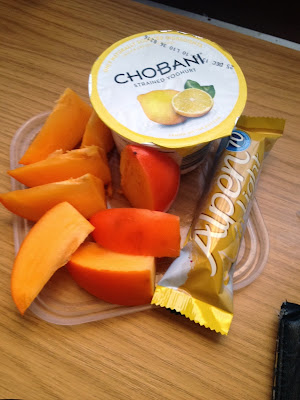 I rather liked the Chobani yogurts, very similar to the Danio, but less syns, and they have a lemon flavour too! I didn't eat the Alpen bar in the end as the persimmon filled me up. With food eaten it was time to drop Hague off in Barnsley and then keep myself occupied for a few hours. I decided to go for a run around a local lake.

Luckily I decided to go early and got there just after 9.30. I couldn't help but notice a veritable Christmas of elves, snowmen and Father Christmases though, and apparently I was an hour prior to a Santa run! Thank goodness I was early and managed to run my 5K in relative peace and quiet. It's been a while since I've ran though and once again I've struggled, I need to get out more regularly if I'm planning to run a half marathon next year.

I rewarded my activity with a nice hot  bath accompanied by a Starbucks gingerbread latte - their syrup in the skinny latte is 3 syns though, so a bit more than Costa, and a banana. 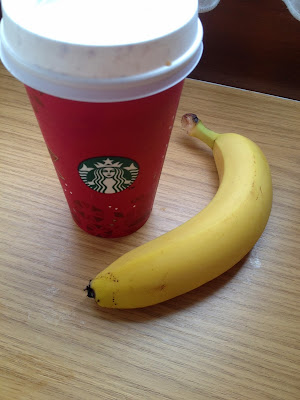 Once out of the bath, it was time to checkout and so once the car was full of petrol again I decided to head to MeadowHell for a mosey around the shops....why do I do it to myself? Within the first 10 minutes of wandering around the mall I had passed a Krispy Kreme shop, Millie's Cookies and a pretzel stand. There's willpower for you! I did eat whilst I was there though... 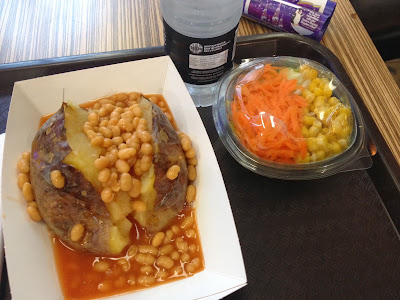 That little lot cost me £6.07, healthy eating is rather expensive! After eating I had plenty of time to wander around the shops and I treated myself to a new jumper, sz14, and couldn't resist getting Hague a Christmas jumper. 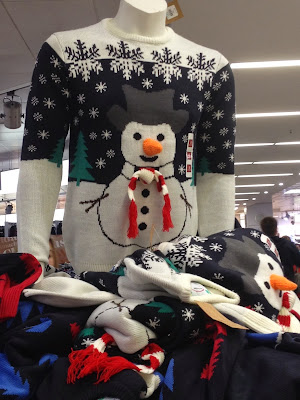 I even braved a Primark queue for it, as it was that awesome. The queues in all the shops were getting a bit much for me though and after a bit more of a mosey I'd had enough and so had me a snack in the car and then went off to meet Hague at his Mum's 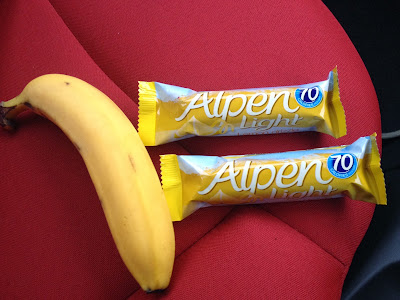 The birthday boy finally opened up his presents at his Mum's and they all seemed to go down well, and the Christmas jumper raised a chuckle, which was my intention! At about 5ish we set off home, and the hungries hit, so as I drove Hague fed me sushi and then further into the journey we both picked at a packet of grapes. Once we were safely back indoors, having picked up a BooDog on the way, it was Advent calendar time! I went Slimming World friendly this year, with a picture one rather than a chocolate one. 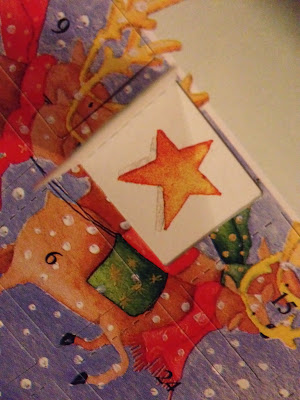 Much as I wanted to stay up late with Hague and enjoy the tail end of his birthday I was just too tired and got myself up to bed more or less straight after dinner. 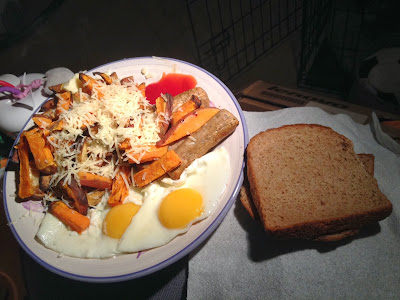 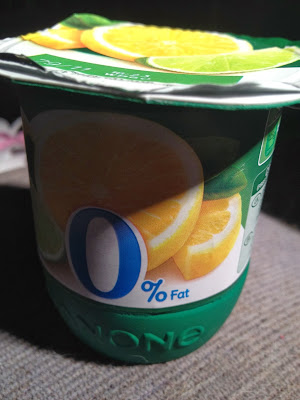 So if Blogger shall allow, let's move onto Monday, back to work day :o( As I'd gone to bed so early, I found myself up and about at just after 2, not so great when you're working nights to be honest, but I'd been in bed for ages! I sorted out some breakfast and then Hague asked if I fancied a wander around Gorleston, of course I did, I do love having a wander and so I breakfasted, got a chilli in the slow cooker and got myself dressed and we headed out. 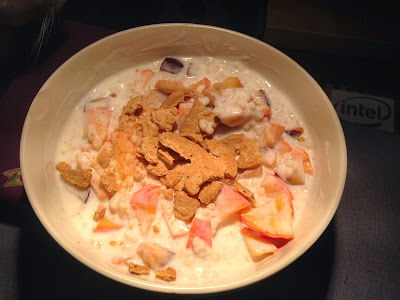 It was lovely getting out. We just wandered up and down the high street, all wrapped up warm, with Christmas lights twinkling away and I thoroughly enjoyed it. We discovered the joys of FarmFoods as well, and the fact that they stock Quorn sticky fillets, and QD stores, which I'm sure we'll be frequenting again. Alas, the two shops we actually wanted to go to were both non-existent. I still had a lovely time though. We then had to head to the rather less exciting, but more necessary supermarkets as the cupboards were very bare! Once we got back home we decided to book our Christmas Click and Collect slot at Asda and got to work on our list of Christmas goodies - it was rather fabulous fun choosing what picky foods we'd be enjoying during our two days off plan, and sorting out what we'd be eating on Christmas day, and decided on the alcohol! All too soon though it was time to get fed and then get myself to work :o( 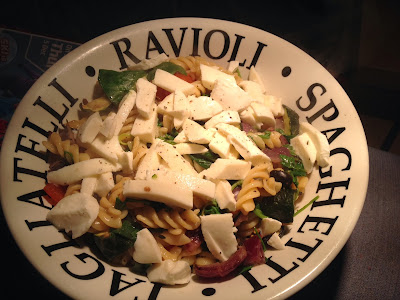 Dinner was simple, but I made enough pasta to have plenty left for work food during the week. Work was a bit different from the norm for once, as I'm still training and the line wasn't running so myself and my trainer ran through the size change - a job that happens frequently, but doesn't always happen at the right time to see it when you're training, so it was definitely a good thing that I got to practise it. Work noms were nothing out of the ordinary, a banana and bag of Crispy Fries which somehow I didn't photograph and lunch was my slow cooked chilli. 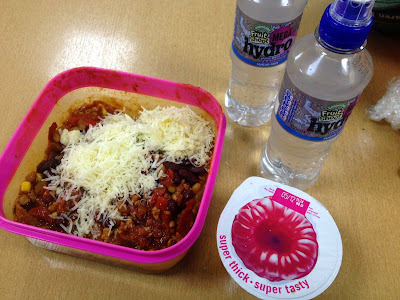 I did have other food with me, but I wasn't hungry after my chilli and so it came home with me. After getting up so early and having such fun before work I was knackered by the time I got home and so I got myself straight to bed!

Okay, so this was pretty much where yesterday's unseen blog ended, so let's enter the realm of the unblogged now :o)

Tuesday is weigh in day, and so I was awoken my Hague at 4.30 so I had time to get myself awake and then up and dressed in time for weigh in. I was pretty sure I wouldn't shift the 4lb needed to get my 11stone award, but I was definitely hoping to at least get rid of the undeserved 2½lb gain from last week, but no, just 2lbs shifted. Now I know that sounds hideously ungrateful, as it's a loss, but after a gain for no reason whatsoever I would have hoped at least to have shifted that despite it being star week. I was desperately upset - I'm blaming hormones - and had a bit of a cry at group, despite doing my best not to. The thing is, as you can all see, I stick to plan, I stick to plan ALL the time. It's not like anything is sneaking in, so where do I start with trying to stop this yoyo-ing? It nearly drove me insane over the summer and I'm not sure I can cope with this happening for the best part of a year whilst I try and get to target. It is mentally so hard to deal with, never knowing what the scales will say, especially when they don't reflect the good things you're doing.

I could put it down to my exercise dropping off a bit, or my portions getting bigger as it's getting colder, but I'm not sure they're valid reasons, and so I shall just try my best to get over it, again, and stick with the plan and hope I get a better result next week. Again.

And so it was a very grumpy Karen that attempted to type up a blog last night, spending a good hour wittering away to find that Blogger had eaten all my hard work when I went to publish it. The world was definitely against me last night eh?

Dinner was a joint effort, Hague had put the rice onto cook and the veggies into fry before he headed to kick boxing and so all that was left to do was re-heat the veggies and make up the curry sauce. I was giving the Mayflower sauce a go for the first time, and I must say I wasn't overly impressed, but I only used 14g as I'm a bit tight on the old syns. 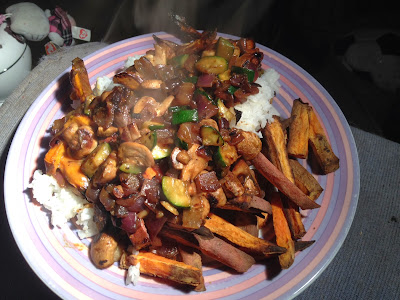 Lots of veggies there, as well as sweet potato chips and rice. I'll definitely have more sauce next time though as I could barely taste it. After dinner I was perusing through the fridge and in a decision I was to regret before long, I decided that the tin of custard that had been in the fridge for a at least a week would make a great dessert. Which it did. 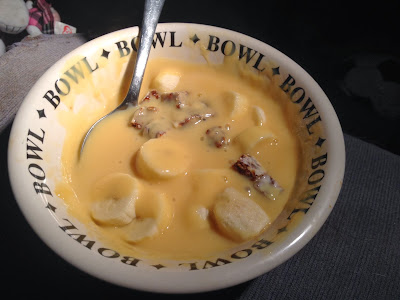 180g of it, for 7 syns, mixed with a banana and a Xmas pud HiFi bar. It was lush and I thoroughly enjoyed it. Alas, it was pretty much time for work by the time I'd eaten it and so work clothes were put on and out I went.

It became clear quite early on that something wasn't quite right. Gurgling tummies are never a good thing, neither is having to rush to the loo almost constantly when you're working in food factory. I did attempt to eat to see if that would calm my stomach down... 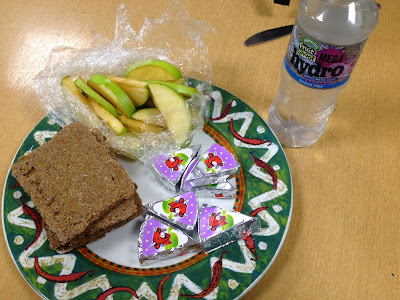 ..and had a ginger tea to try and calm the sicky feeling, but nothing worked and so a rather poorly me headed home just after 2am. Not the greatest end to a rather shitty day, no pun intended there!

I spent most of the night feeling hugely uncomfortable with nasty stomach cramps and visits to the toilet, but it had all calmed down by the morning thank goodness, so it'll be work as normal tonight.

So - what are my plans for this coming week? I'm not sure really. As I've said, I don't really know what to change, and I'm guessing the Eating Week Old Custard Diet isn't really much of a goer in the long term eh? I will definitely get my butt exercising a bit more, although my bad stomach thwarted my plans to swim this morning after work, but we have plenty of gym equipment upstairs so half an hour up there is easy enough to fit in. It shows how much the exercise has dropped off that I have had to restart my Gold award, well Platinum, as I have 3 uncompleted weeks now. Not good, the cold weather and dark nights really are not good for this fitness lark, no wonder people join gyms!

Right, here's hoping this blog will save, and you can all enjoy my rambling, whinging and tales of bad stomachs with no hassle tonight! ;o)