It’s been a busy couple of days, well, when I say busy, I mean one busy, long day and then a day of me being very, very tired because of it – that counts right? Hence once more my poor little blog being all neglected!

I shall whizz back to Sunday, as when I left you on Saturday I was in a Premier Inn in Coventry all excited about my day with TOK and WeightLossBitch, as well as Liz and some other lovely ladies that WeightLossBitch has previously met. I was nervous, aren’t we all when meeting new people, but the excitement definitely outweighed that, as I feel like I’ve known WLB forever as I’ve been following her blog ever since the first post – ah Pubic Omelette I remember you well :o)

Anyway, I was awake far too early, and got myself up, coffee-ed and out to find a low syn breakfast at the local Toby. They served Quorn sausages and a variety of eggs, so I figured I’d be pretty safe. 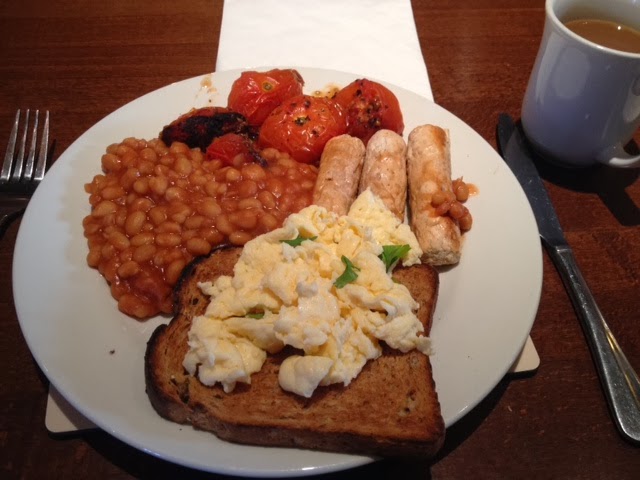 I was slightly thwarted in  my angelic plans, only white or granary bread, so had to use syns for that, and no sweetener for my bottomless cup of coffee, so another 5 syns were wasted on sugar. Lesson learnt there – put sweeteners in my handbag! Apart from that, the Quorn sausages I’d allowed a syn each for as I doubted they were the low syn ones and so the breakfast I’d hoped would be saintly actually cost me 13½ syns! Doh! The chef very kindly sorted me out some plain scrambled eggs though, so a huge thank you to you Mr Toby Carvery Chef :o)

Full of noms off I headed to the village hall that would be our base for the day. Enjoying a bit of time with WLB – who is not even vaguely a bitch, just truly lovely, open and caring – before everyone else arrived, including my amazing TOK, who I have missed hugely since we last saw each other in July, and her friend Liz, who I have spoken to, but never met. With presents and cards exchanged it was time to get to know everyone else, and plough on with the activities of the day.

First up we had a relaxing mindfulness session – learning how to just stop and think in the moment, with no judgement, and a relaxation exercise that nearly sent me to sleep, that was followed by a rather interesting self defence session, with more emphasis on a positive, confident mindset than on any physical way to defend yourself, once again it was rather focused on the mindfulness – being aware of your surroundings, of the situation you’re in, and very handy tips on things to use to defend yourself, such as teaching us how to slap, and to use our keys. It really was fascinating, and I think everyone took something away from the talk.

It was then lunchtime and WLB had made a huge vat of veggie chilli with jacket potatoes and cheese. Just perfect! Finished up with fruit and yogurt, plus of course, much more nattering whilst we ate!It really is nice to just chat away to people who are in the same boat as you, wherever in their weight loss journey they might be, feel that connection despite age or distance. The afternoon then kicked off with some Kali – Filipino stick fighting which was absolutely amazing. I thoroughly enjoyed it. So much so that I got home and looked for a local dojo that offered it! It was such fun, but was a really good workout, getting the old heart pumping quite quickly. You can also adapt quite easily with wrapping paper – something myself and TOK were planning to experiment with when we got home!

The day then, unfortunately, had to wind down, and so goodbyes were said whilst we headed our separate ways. My journey was going to be at least 3 hours, and so I’d grabbed a couple of clementines to sustain me. They were eaten before I got more than a few miles down the road though and so I had to stop for more noms before finally reaching home at about 7.30. 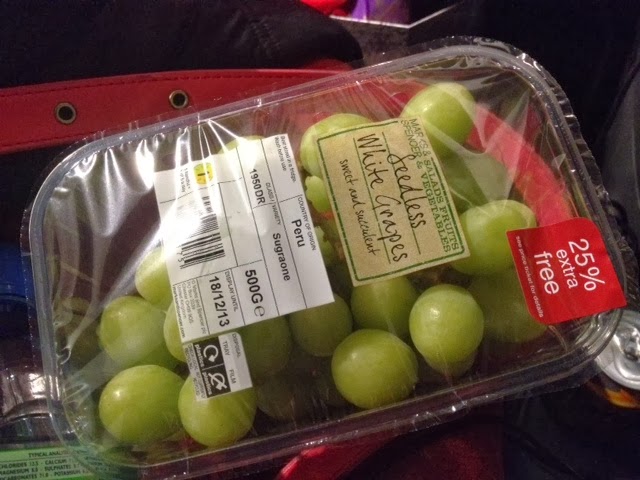 Of course, the first thing was giving my lovely Hague a big hug, and then I got myself a rather weird dinner, but it was what I fancied. 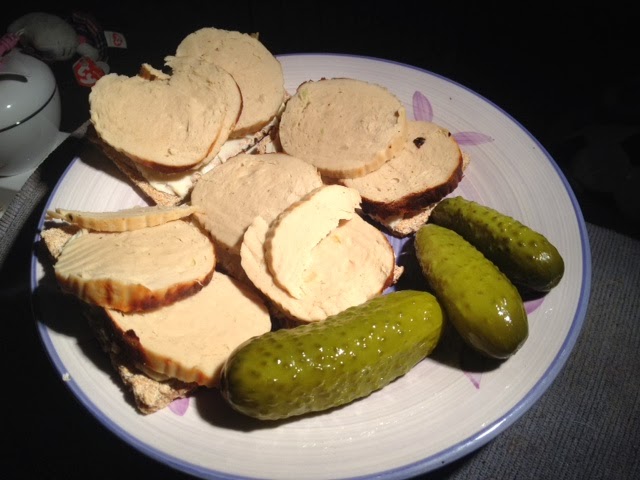 Quorn roast atop blue cheese triangled Ryvitas. Lovely! It was then just about time for me to head to bed, ready for the stupid week of earlies I have to get through rather than having a lovely week off.

Healthy Extras
A – milk, a variety of whole and semi-skimmed in my coffee’s during the day
A – 30g Cheddar
B – 4 Ryvita
B – 4 blue cheese light LC triangles

Eeep! Half over! Something I refuse to worry about, I’m sure 10 calories won’t be the cause of any random gains this week (should I have yet another one!)

So onto yesterday, which started at 2am, as that’s when I woke up, and then I couldn’t get back to sleep, and so by the time I got up for work I was shattered :o( I’d also not asked Hague to do me any breakfast and so I also had to sort that out before heading out. When I got to work it was to the news that the team I’m with this week was training for 4 hours, and so it wasn’t going to be the busiest of days. Not good! Although this did mean I could squeeze in plenty of breaks whilst I got one with a task I’d been asked to help with weeks ago, and could now finally get around to. 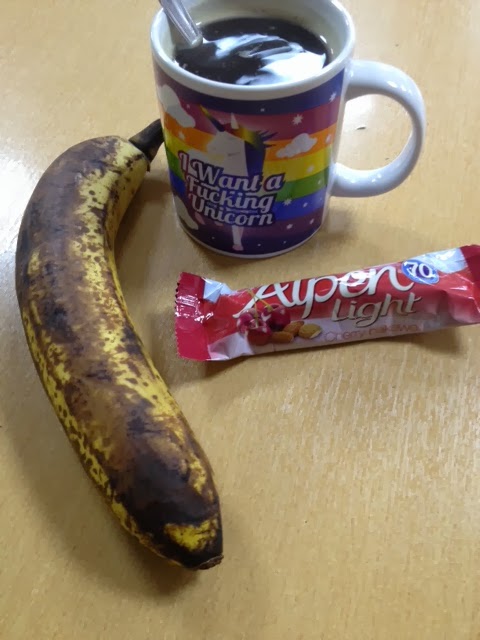 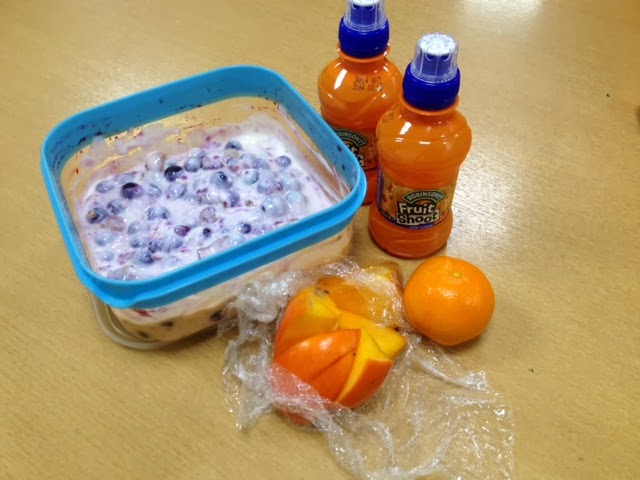 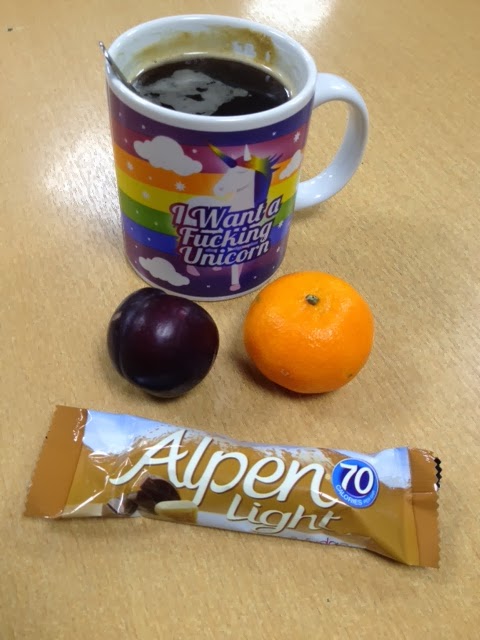 So, the day dragged rather a lot, but soon enough it was time to head home, via Aldi, as I refuse to pay £1.20 for a tub of fat free natural yogurt at Tesco or Asda when Aldi sell it for 55p! I met Hague there and also found some bits for taster at group this week. By the time we’d got home, and I’d got fed it was nudging 4pm. 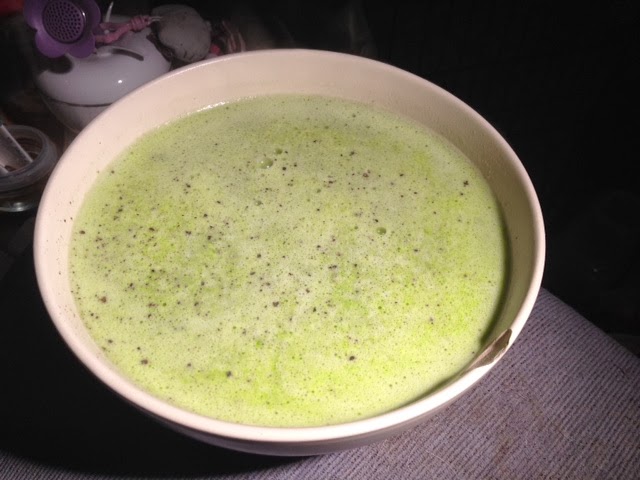 I went for the easy option for my feeding, some soup, with broccoli, spinach and blue cheese triangles.

Dessert was some chocolate buttons :o) 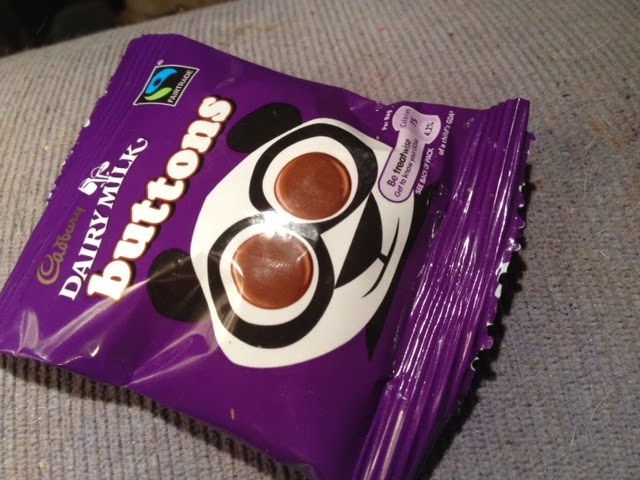 Much as I tried really, REALLY hard to be all awake, it wasn’t happening, and so I put together the now obligatory plate of snackage (including more homemade marshmallows from Liz) and headed for a nice hot bath, and then bed! 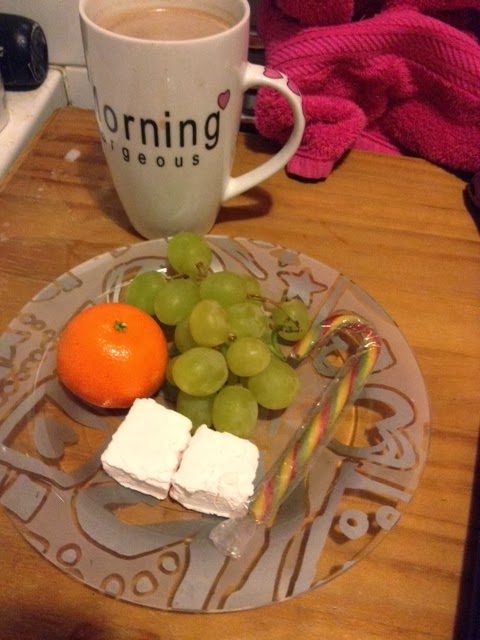 My bath mostly involved lots of my Soap and Glory goodies that were in my 11st treat. I then got snuggled up in bed nice and early and dropped off quickly too. 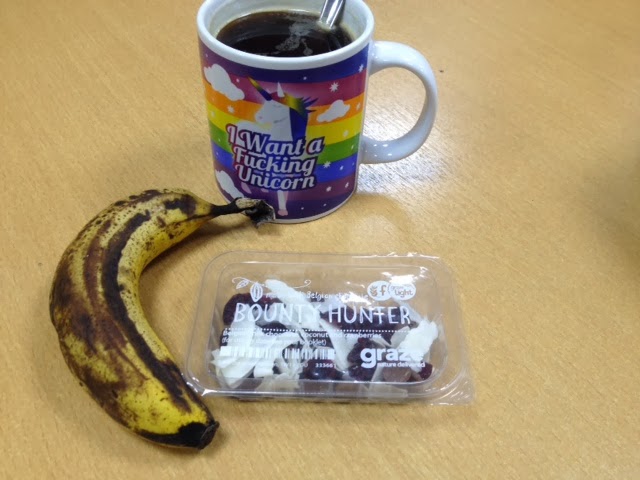 A little Graze box there making an appearance on my first break, this one was rather lush, with cranberries, coconut and chocolate drops. 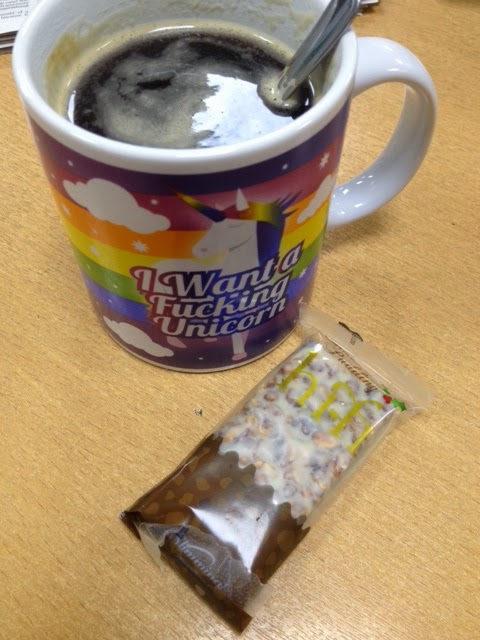 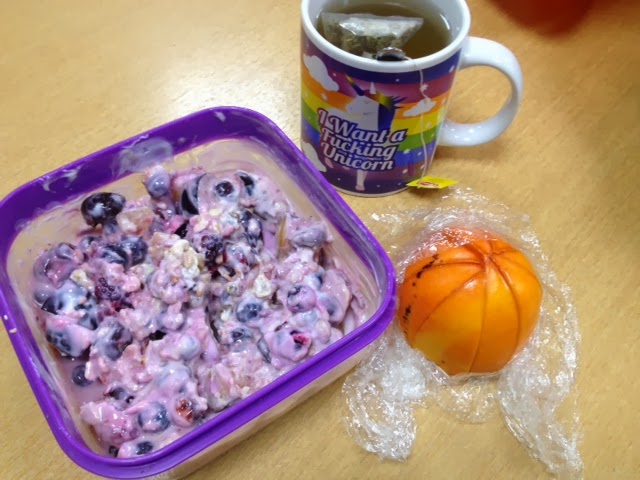 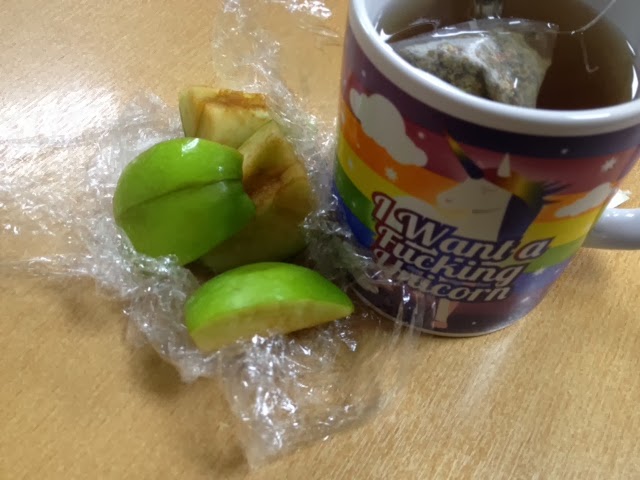 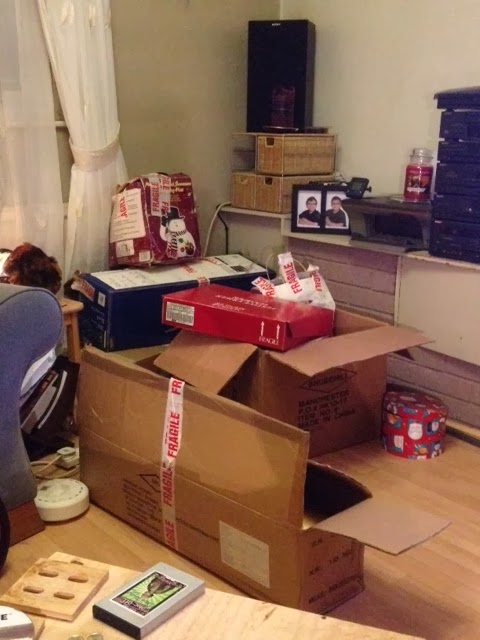 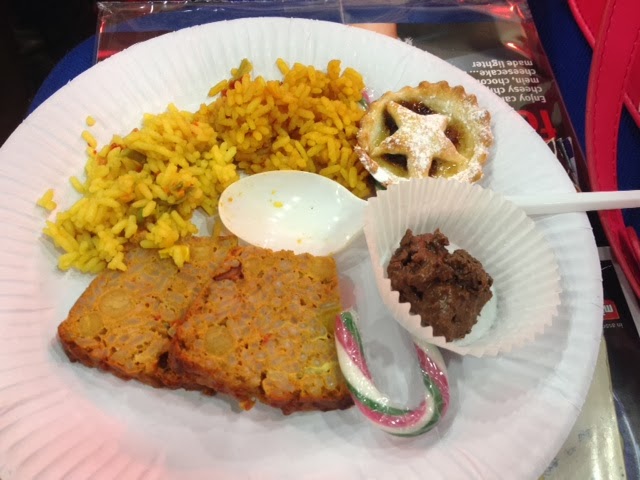 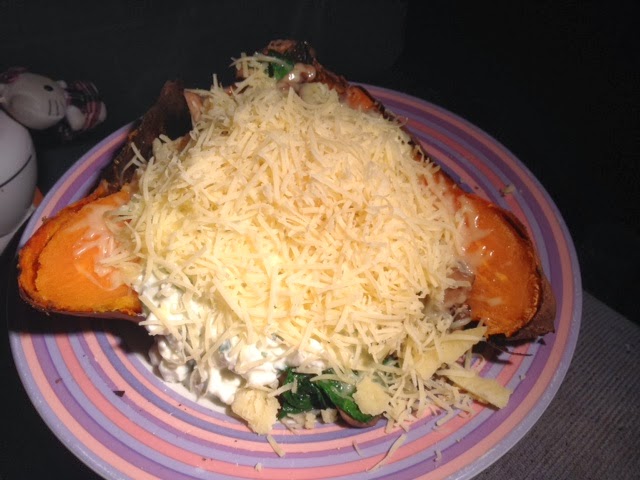 What a huge blog! Sorry! Best that you make the most of all these good girl days before we descend into the mayhem that is a MitchyHague Christmas :o)

I hope you are all within touching distance of your Slimming World Christmas wishes, if you haven't got them already! x
Posted by Unknown at 20:36