Slippers and The Slippery Slope

Friday at last, somehow, despite only 3 days at work, this week seems to have been insanely long. I guess a lot of that is down to the fact that so much has happened, being ill, my Nan's funeral and then getting back into the swing of normality again. Despite my early(ish) night last night I was still rather tired when I got up - for a change eh?

I got into work without too much hassle and as I've noticed that I do tend to gloss over work in my blogs, as it’s not the most fascinating of jobs, so today I’ll make more of an effort.


I was rather achey when I got into work, that’s what happens when you leave it 5 days between runs! As my line wasn’t running, I didn’t have to rush down to the line so had a cheeky cuppa before I started, accompanied by a Benefit bar as I didn’t have a proper dinner last night. 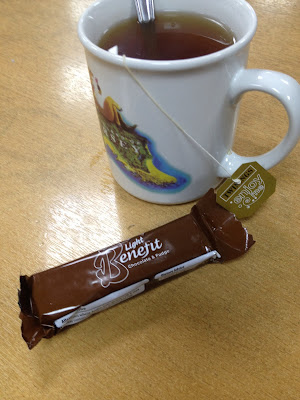 Then down onto the line where we got it all prepped up and ready to go whilst we waiting for the juice to be made up. I then decided to get some more birthday shopping done, and then waited some more (can you see why I tend not to go into detail?) When the machine started running, it played up. Joy.  It had just about calmed down when I headed off for a break. Once again, due to no dinner I had the hungries and so had more snackage. 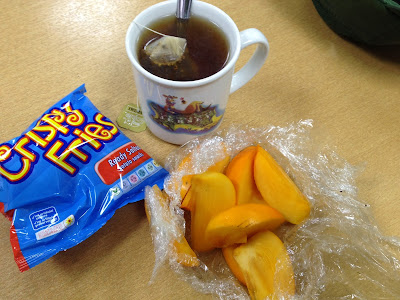 Back on the line once more and after a few issues and a lot of stop/start the line was finally out for the week.  I got the machine changed over all ready for Monday morning,  then got myself some breakfast. 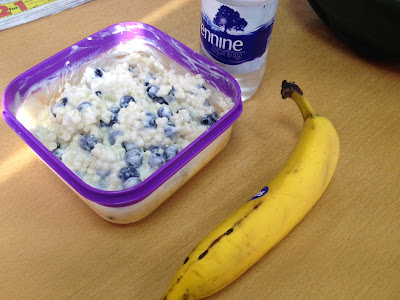 Today's toasted couscous was accompanied by blueberries and Activia lemon and lime yogurts and followed up with a rather large, and strangely straight banana. Rather than heading back to clean my machine I thought I'd ask if I could work on the presentation I need to get sorted for Tuesday, and luckily, as we had some spare people, he could free me up. Brain ache then ensued. It's been a long, long time since I've been anywhere near PowerPoint, let alone have to have a think about what might make an interesting presentation....it wasn't too long before I needed sustenance. 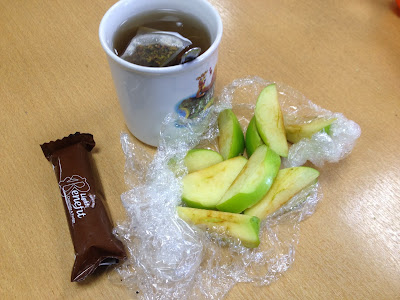 My last apple & cinnamon tea bag :o( When I got myself back in front of the PC I cobbled together the beginnings of an okay presentation (I think) and all I then had to do was save it...that's the easy bit right?? Wrong. Apparently when our work computers were updated, something called BitLocker was installed, which means any usb drive inserted into one must be encrypted and password protected. I put my usb drive in to be greeted with a password page. I tried my usuals with no success, and even some of my more obscure attempts. Nada. So I had a presentation that I need to have for Tuesday on a computer I won't be near on that day and no bloody way to save it. Grrrrrr. So a hunt then ensued for either a way to crack the password - the forgot password link was pretty much gobbleydegook - or for another usb drive, unsullied by BitLocker passwordeyness.

In the end it was a shiny new usb drive that I had to find, and then wait 15 minutes for it to encrypt before I could carry out the seemingly simple task of saving my work. By that time it was time to escape as well, thank goodness! With Hague not working it was planned to get ourselves straight out to the shops, but as I was (still) hungry, I polished off a tin of beans before we headed out. 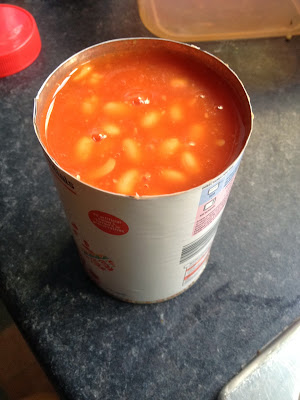 Supposedly we didn't need much shopping. We still managed to spend too much though. Oops. I did get new slippers though. With PomPoms. Yay. 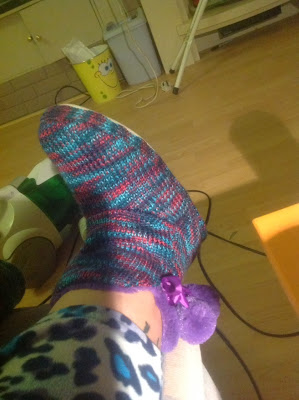 As you can see, it didn't take me too long to get comfy after we got in :o) I went for something quick for lunch. 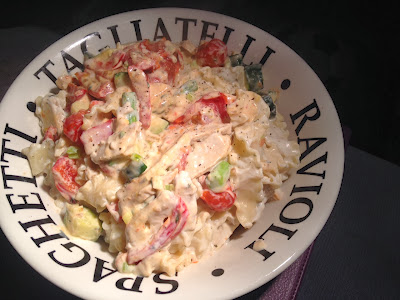 Pasta, with a pack of the Quorn roast chicken fillet slices (which are now free - yay!), plus roasted veggies - pepper, tomatoes, courgette, spring onions and asparagus - mixed in with both my HeA's of soft cheese. The pasta seemed to expand hugely whilst cooking and so I ended up with quite a huge portion, no wonder I felt so tired all afternoon. Not long after I'd eaten, sofa snuggling was cut short as Hague headed off to yet another bashing people class, this time it was boxing skills. I made the most of my window of opportunity and had me a bit of Paul Hollywood time with a cuppa before I had to pick Hague back up at 8.

Obviously, my boxing boyfriend was rather hungry and so set to getting himself some dinner sorted. I decided that I also needed food and went for that diet classic....egg and chips :o) 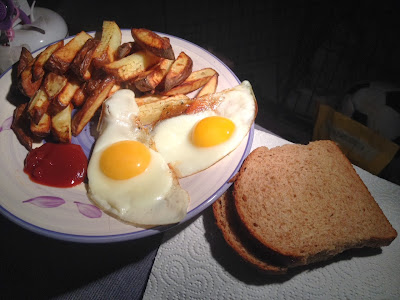 It's now getting to the really late hour of 10pm, on a Friday, and I'm nearly ready for bed I'm afraid. The lazies have really struck today as well, there was no excuse for me not getting my lazy bum out for a swim today, in fact Hague even wanted to come with me, but I didn't manage it, preferring to sit on the sofa. Bad Karen. I'll finish up today with a nice hot chocolate and a Danio yogurt, and hopefully the lazies will have departed by the morning as it's Park Run day.

For some reason, this week I've felt like I've struggled to stay on plan as well, I haven't fallen off the bus, but things have seemed off...I'm a bit nonchalant about my syns, only keeping a vague track during the day, although this might have more to do with my general feeling of meh-ness than any impending crash of my good intentions. I'm also finding myself lingering over the dessert aisles and eyeing up all the Christmassy goodies already. It's hard to describe, as I haven't had a sod it moment, but somehow that seems more likely that it has done in many, many months. I'm really not sure why either.

I'm hoping that a few days away from work will have me feeling better. My glands are up again, and I'm feeling so tired. I've decided to stop fussing about my Body Magic awards and just do my exercise as and when I feel up to it, which is still several times a week after all, and I enjoy it too much to give up on it, I just need to give myself some proper recovery time and what better than a week off to do just that? No slippery slope back to couch potato-ness for me. Except for today ;o)