If you are of a weak disposition, you might want to scroll down the first bit of this blog. On Wednesday I went out for lunch with my Mum. It's the first time we've been out in ages, and I think we can safely say that it wasn't a very Slimming World friendly meal.... Actually, the starter was pretty good, a very small slice of ciabatta, topped with a poached duck egg and some mushrooms. Practically on plan there....Not so much my main course.... 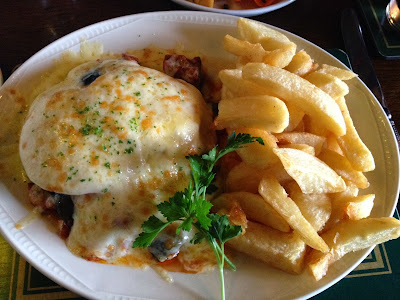 Underneath that veritable ocean of cheese is a vegetable moussaka. According to syns online, a restaurant portion contains around 11 syns. I feel that this portion may contain slightly more... I had planned to have it with a jacket spud, but when faced with the words "hand cut chips" all willpower fades I'm afraid! At least I had a salad on the side! Superfree and all that! To be fair, the moussaka was totally stuffed with veggies under all that cheese. 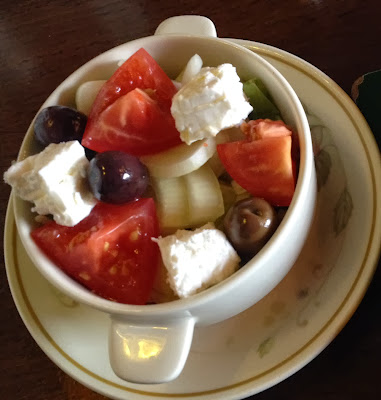 I have no defence for the following picture. Although it does have a banana, so you know, a third superfree and all that, and it's a meringue and eggs are free, right? Was bloody gorgeous anyway, and I had to resist licking the plate. Even the coffee came with cream rather than milk! Oopsie. 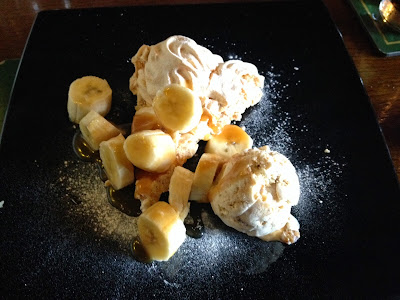 After what was, a truly delicious meal, and a lovely catch up with my Mum I headed home, and I'm sure none of you will be surprised to hear that I headed up to bed for a big ol' nap!  Iwoke up when Hague got home from work and relaxed with him for a while before having a quick snack, and heading out for a swim. I had to do something to negate that lunch! 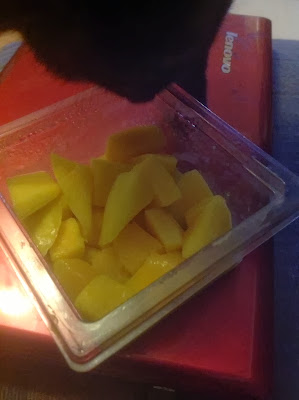 Flumpy was investigating my mango there....

I managed to swim 52 lengths, probably enough to burn off a couple of chips, but it made me feel better anyway! After swimming I was actually hungry again, and in the hope of damage limitation I had a bowl of lovely superfree veggies. 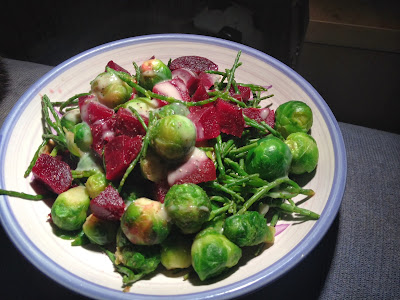 A bit of a first there too, as it was the first time I'd tried samphire, as we'd picked it up reduced. Not sure I'll try it again though as it was incredibly salty! The veggies were lush though, exactly what I fancied after the over indulgence of earlier on in the day.

Dessert was syn free too, blueberries topped with a lemon and lime 0% Activia yogurt, after which it was time for bath and bed! I'm guessing a food diary wouldn't be helpful today...shall we skip to today??

I was feeling immensely tired when Hague got up for work today. I could quite happily have stayed in bed for hours, but I was meeting Sacha for a coffee and so had to drag my lazy bottom out of my comfy bed and head into town, armed with a HiFi bar for an on the go breakfast. 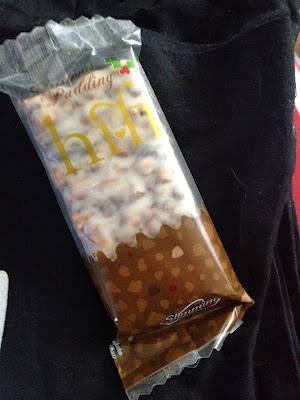 We had a lovely time chatting away, and I put away two large black coffees, so I then spent the next couple of hours practically twitching as I wandered around town. I picked some celery up for lunch and then took Hague a coffee whilst he was at work. He then sent me on a mission to pick up some trousers he'd had put aside at a charity shop, so that means I can blame him for me buying a skirt to slim into :o) 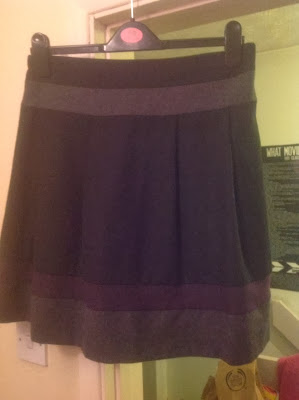 It really is a much closer to target skirt, as it's a sz12, but I did try it on, and somehow it's only 2-3" away from fitting!! Talk about gobsmacked!! I'm hoping that I'll be fitting into in by my birthday :o) I like to have little things to aim for!

Obviously, by the time I'd gone backwards and forwards to charity shops I was starving, and so got myself home and put the celery to good use by making some Greek beans in my lovely new Le Creuset pot. 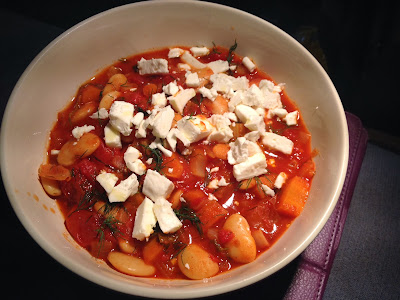 Lush there were too. Any idea of having some leftovers were dashed by Hague trying them for the first time when he got in from work and thoroughly enjoying them :o) We then chilled out for a bit before he headed to Kickboxing, whilst I headed to Argos to pick up some new kitchen scales - pretty essential on Slimming World - and to have a mosey around TKMaxx and Tesco. I resisted lots of lovely candles and Le Creuset thingums in TKMaxx, but picked up lots of bargains at Tesco, about half a basket full of lovely reduced fresh fruit and veg for less than £3 :o) For some reason, my mood took a horrible old dip whilst I was in there though and I decided to go for a short run to try and perk myself up. It worked a bit, and at least it got me to 9pm when it was time to go and collect me a Hague. With us both back indoors it was dinner time, and I put my bargains to good use with my reduced sage and vine tomatoes being mixed in with some pasta, cheese and butternut squash to create dinner. 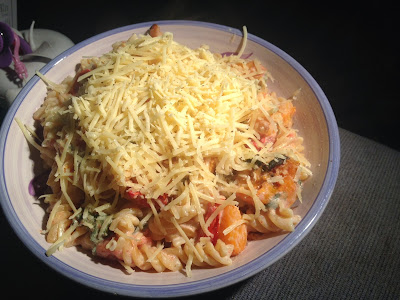 Yummy it was too! I followed it up with some fruit and a Liberte yogurt that I have finally found to try, as they are lighter on syns than the Danio ones. 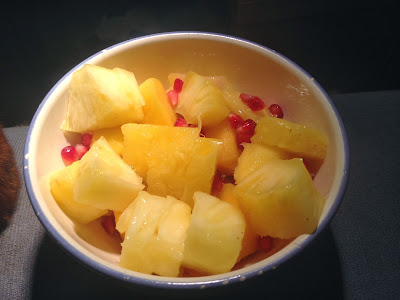 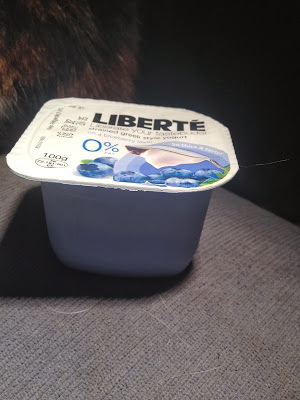 The day shall be ended in a nice hot bath as I'm currently freezing to death and sneezing my head off!

It's been an odd day, it seemed to just race away from me at the speed of light and now it's 11pm and I feel like I've achieved nothing, in fact I feel like my entire week off has just zoomed past like lightning! I'm very pleased with my purchase though, and the thought that I will be fitting into that skirt before too long is a rather nice, but rather head screwy one. In my mind I'm miles away from a sz12, so it'll be quite a special day when I  can slip into that skirt! My aim is before my birthday, so I have 3½ months! At least I've managed to keep my syns down(ish) to try and cancel out some of yesterday's damage....Yeah....think it'll take more than a spare 7½ syns hehehe!