Lots of Food and Lazy Failure

Weariness hit before I had a chance to blog yesterday. In fact I was in bed by 10pm, on a Friday! I obviously needed the sleep though as I pretty much dropped straight off :) So what had my day contained that made me so tired?

Eating, that's what my day contained! I literally did not stop eating all day. Thank goodness for free food! 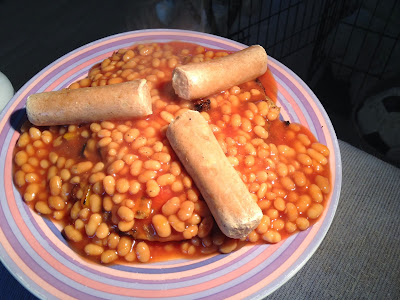 I started with what should have been a lovely, filling breakfast, under than entire tin of beans and low fat Quorn sausages is an omelette stuffed with vegetables. Plenty to keep me going for ages you'd have thought eh? Nah. Less than two hours later I was peckish again and so had a quick snack. 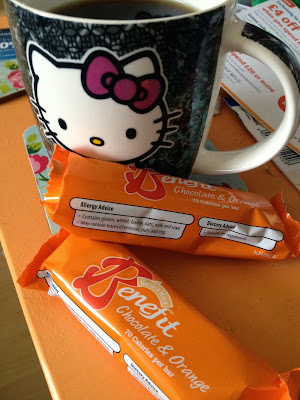 That would keep me going for a while right? At least until around 3pm when Hague got home.....nope... 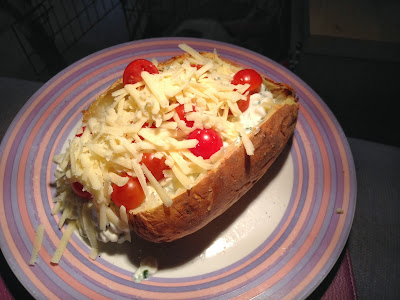 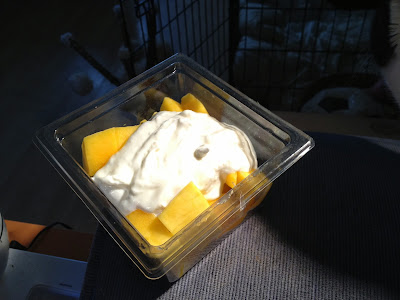 I really was having a monster hungry day! Luckily, when Hague came home he wanted to pop to the station to pick up his train tickets and then head to Sports Direct, this meant that I could leave the house and stop eating! Normally we'd drive, but as the sun was shining and I was feeling lazy (can't think why...) we decided to walk instead. 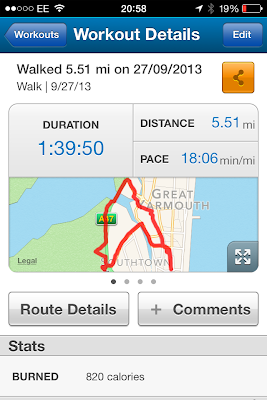 Yep, that does say 5.51 miles :o) I actually really enjoyed the walk, and as we headed through town first we popped into a shop or two, and finally we found the holy grail that I have been searching for for months. Weeks and weeks after the rest of you have become bored with the gimmick that is a Coke bottle with your name on it, I have mine :o) It's taken forever, but I have one. I'm insanely happy! 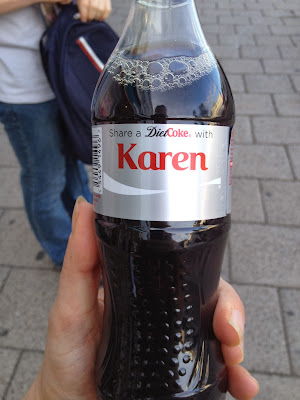 The walk then continued, to the station to pick up tickets, then on a bit of a mystery tour as we tried to find our way from the station to the retail park. Pavements disappeared and so we found a more rural route, hence the wobblyness at the end of our epic walk. I even managed to find food there... 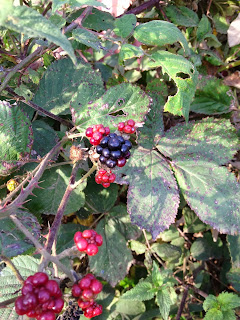 I do love a blackberry! Sports Direct was productive with Hague picking up some shin pads for his Kick Boxing and me getting a £5 swimsuit for my new favourite thing. By the time we got home it was nearly 6.30. Of course, that's dinner time isn't it? 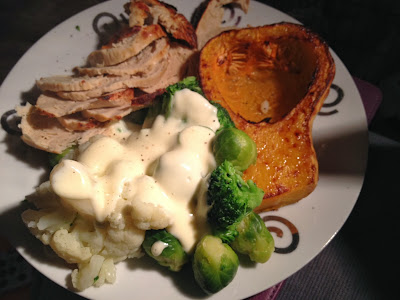 Quorn roast, with butternut squash and broccoli and cauliflower cheese with some hidden sprouts. It's been so long since I've had Quorn roast and it really hit the spot! Hopefully it'll soon be back in Asda so I don't have to go to a zillion supermarkets anymore. In the spirit of the Day Of Much Food I followed dinner up with dessert. 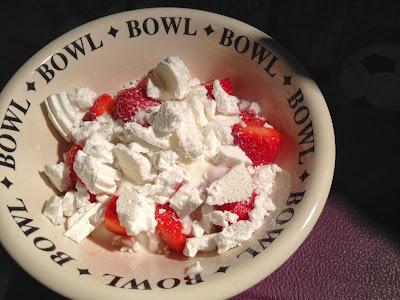 As I type this up I really can't believe I ate so much! The evening was quite quiet except for much banging and crashing upstairs as Hague is creating his gym in the spare room and so much manoeuvring of exercise equipment and moving out of furniture was going on whilst I did quite a lot of sitting to let my poor little legs recover from all that walking! I was really tired, but when I realised I still had a HeB to have a craving surfaced for honey on toast. 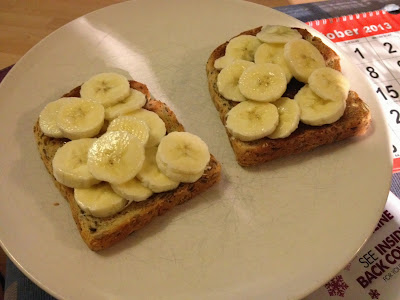 It was really yummy! After eating that I decided that I'd best head to bed before I started nibbling away at the animals or furniture O.O

I may have been trying to feed the king of all worms today, but I came in under my syns, relying on lots and lots free and superfree food instead! I was tucked up in bed nice and early, and went to sleep quite quickly.

Hague had to be up at the crack of dawn to catch his train to Barnsley, and so I was up and out just before 7 to drop him off. The station is next to our Asda, but the 24 hour petrol station was shut (again) and so I had to head to Tesco to tank up, and decided to head in there for a mosey and ended up picking up some small bowls, a bottle for my milk allowance, pineapple and rather randomly some butter beans. I was, of course, hungry when I got home and so had the pineapple for breakfast. 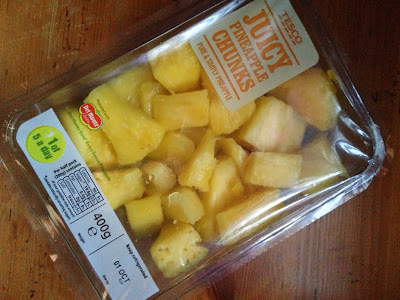 I then put my earplugs in, my eyemask on and blissfully slept for another 4 hours or so. Lovely :o) I got up and sorted myself out some lunch, well it was gone midday! 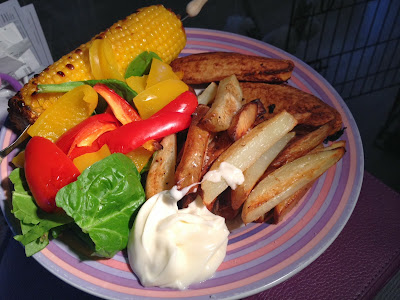 I had also stocked up on some different FryLights in Tesco and so had some BBQ flavour on the Quorn fillets and the buttery one on my corn. Not convinced about the buttery one, but the BBQ worked as always. Whilst I was eating I got rather engrossed in My Greek Kitchen and watched several episodes and decided that the oven cooked butterbeans looked rather amazing and thought I'd give it a go. Alas, I was without fresh Dill and Parsley and planned an outing, despite promising Hague that I would rest today, as he's worried I'm doing a bit too much and will burn myself out. Good job I randomly bought those butterbeans though eh?

Besides, how can you stay indoors when the day looks like this? 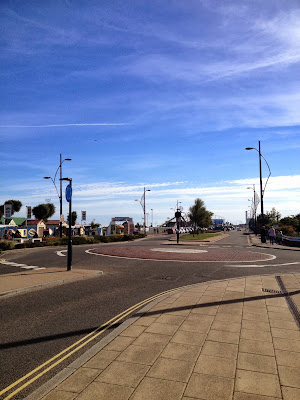 And a new t-shirt has been delivered that looks like this... 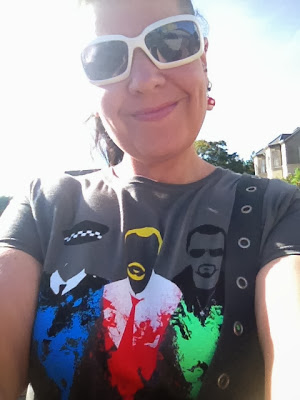 How awesome? I must stop buying Qwertee t-shirts. Especially as I bought another one today! I wandered into town, enjoying the sunshine, and popped into M&S searching for herbs to no avail, although I did find some reduced yogurts, rhubarb creme brulee yogurts no less, how could I not try those? Especially when they were reduced to 30p and syn free. My meanderings then took me to Sainsburys to finally find the herbs and I also treated us to some forks as we seem to have about a million knives, a similar amount of spoons and about 3 forks. At £1.50 for 4 I might get some more! I then got myself home and decided I needed a snack before starting on my butterbean creation. 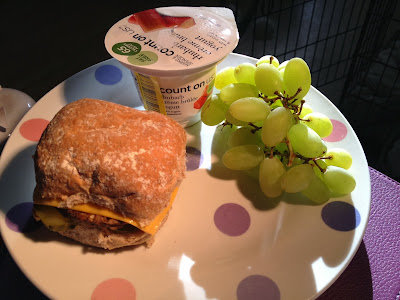 Lazy girl here microwaved the burger so the whole thing was ready in two minutes. I had to dive straight into one of the M&S yogurts too and it was utterly gorgeous. I'm glad I picked up four :o) I then seemed to find myself mired into Homes Under The Hammer, about 3 episodes back to back, and so the butterbean thingum got delayed slightly....and then slightly more as I decided that I really couldn't wait any longer before finishing up Week 8 of my Couch to 5K. Sorry Hague, I did try to rest, honest! Today, I decided to only record the part of the run where I'm actually running (there is a 5 minute walk at the start and finish of the run) to see how far I'm managing to run. I was pleasantly surprised to discover that in the 28 minutes of running I'm covering 2.4 miles. Not too shabby eh? Especially as 8 weeks ago those 60s runs were killing me. Just 3 more runs until I graduate!

Obviously after my run it was bath time, which also means snack time as in one of the first podcasts of Couch to 5K Laura tells you to have a small snack after your run. Something I have happily taken to heart. 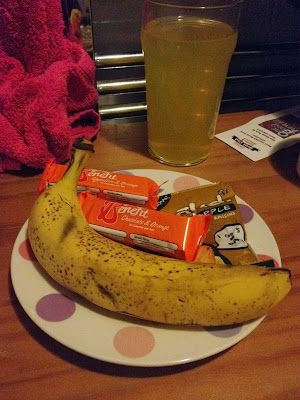 I had a lovely soak, and ended up so relaxed that I could have quite happily have curled up and gone to sleep there and then, but had to head back downstairs to feed the animals and chat to Hague before he went to bed. I didn't have the energy or inclination to start on the butterbean creation and so went for some fried rice, although I am yet to get used to using a soy sauce bottle that doesn't have a a small hole and so the rice ended up rather soy coloured! 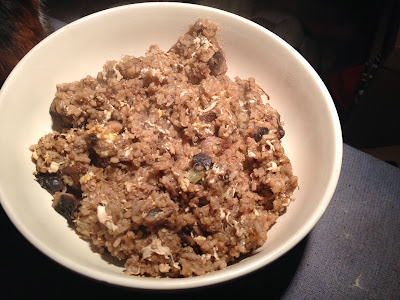 For some reason the rice went a bit sticky, but it tasted good. There are mushrooms, spring onions and eggs in there too. Quick and simple. I followed it up with another M&S yogurt for dessert, whilst I settled down to get you all up to date and watch some Come Dine With Me, it's just not an evening without Hague without a bit of cooking disaster television perfectly voiced by Dave Lamb as far as I'm concerned. I think bed shall beckon soon though, once I've eaten my spare cheese slices for my HeA :). I'm supposed to be up and at 'em at 4.30am on Monday. So wrong.

Definitely not too good at these rest days am I? Strange how these things can change so quickly isn't it? I really will try and rest up tomorrow and do absolutely nothing whatsoever. Not even go to the swimming pool. Not even for a quick swim in the evening. Really.

I really do fail at being lazy now - although I'm sure laziness will return with a vengeance next week with those 4.30am starts.