I'm still a very, very happy bunny about my 10 stone award. I really must stop randomly grinning to myself, people will think I'm even weirder than they already thought odd. As I threw everything out of whack with my overexcitment, we need to head back to Tuesday to get you all up to date!

As you may have noticed from my last blog, Tuesday started with me heading to Slimming World, minus a poorly Hague. There was a taster at group, soup made my our lovely Consultant Claire. The carrot, red lentil and coriander soup from the little booklet with the last magazine. 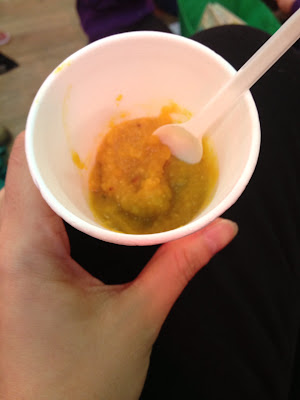 I'm not normally a fan of carrot and coriander soup, but this was lovely. I would have attempted it anyway, but I won the ingredients in the raffle, so it will be on the menu very soon! Obviously you already know the result of weigh in, 2 more lbs gone to give me a total loss of 10st and ½lb. Even with my taster of soup I was starving by the time I got home, and my poorly man had made me a dinner of much stodge to keep me going at work. 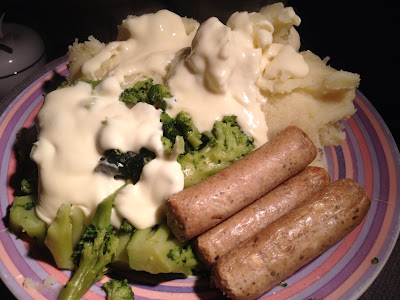 It was absolutely bloody gorgeous! Mash, broccoli and Quorn sausages topped with an entire tub of LowLow. With dinner utterly enjoyed it was time to head to work. As I'm spare this week I'm training once more, which is fine, but as I'm not sure when I'll be on the machine again I'm struggling to get the enthusiasm to be quite honest, and am getting rather bored. Cest la vie though, it pays the bills and once I'm through this week it's my week off! Work food was pretty standard, including a minestrone soup I'd lobbed in the slow cooker. 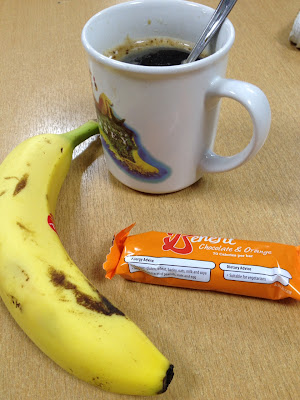 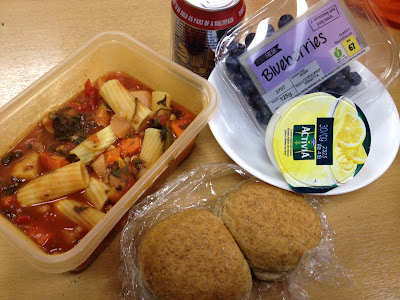 No nommage on my last break as I was still stuffed from my huge lunch :) The minestrone soup is super easy peasy...

Throw everything except the pasta in the slow cooker, once it's nearly cooked throw the pasta in for the last hour or so :) It's made tons, so I may be eating it for lunch all week. Not a bad thing!

After work, I did ponder a swim, but when I walked into the bedroom to get my swimsuit the sweet, comfortable call of the bed won me over and so straight to sleep it was.

Healthy Extras
A - (both) 60g LowLow cheese spread
B - 60g wholemead bread (the roll come in at 75g so the extra is synned)
B - Benefit bar (should have been two, but I was too full)

Onto yesterday then, still smiley despite waking up tired after a huge sleep. Just for a change I had no idea what I wanted to eat, and so settled for a couple of large coffees before I got around to my brinner. I really have no idea what to call my first meal of the day when it's blatantly dinner style, so brinner it shall be. So Wednesday's brinner was the low effort attempt of oven baked risotto nestling atop a roasted butternut squash. 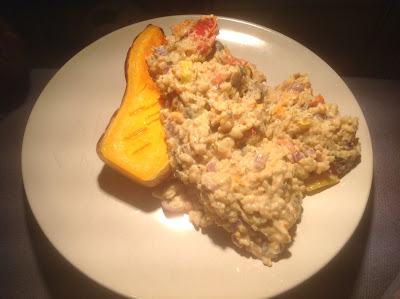 Baking the risotto in the oven makes it rather faff free too. I just roast off the veggies, I had sweet potatoes, onion, pepper, mushrooms and tomatoes, once they're softened I cover them with stock and add some rice and put them in the oven until the rice is cooked. It usually takes about 25 minutes, but keep checking as you might need a bit more liquid in there. Once it was done, I stirred in my HeA of soft cheese and a blue Laughing Cow triangle. It tastes SO rich and delicious, definitely not diet food :) Dessert was mango and a coconut yogurt. 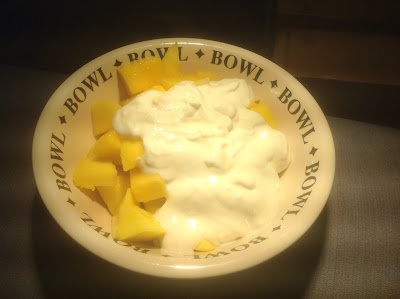 Suitably stuffed, off to work I waddled. Once more it was a quiet night. We seemed to be waiting and waiting for a changeover, got that sorted nice and smoothly on our machine, and then waited and waited for the line to re-start. Thank goodness for my Kindle app on my phone, and the new iOS 7 to keep me from dying of boredom! Food interspersed the day in this kind of way.... 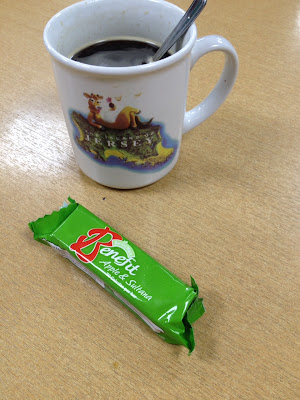 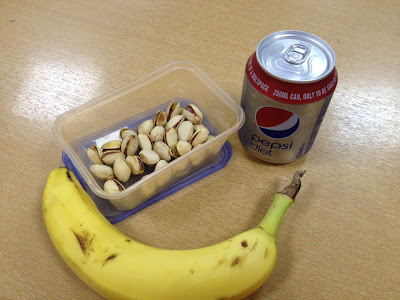 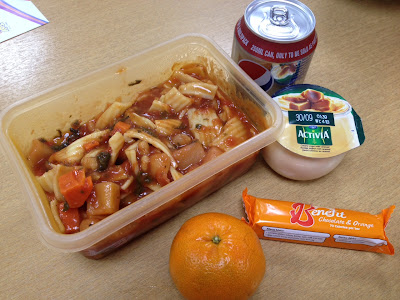 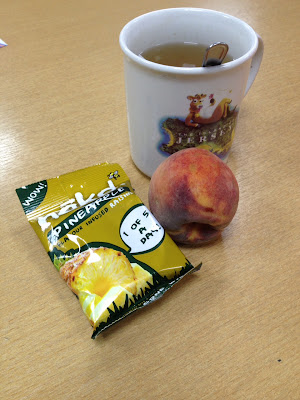 Today's MitchyStrone soup was lethal, as somehow the reasonably warm microwaved soup contained one solitary slither of something hotter than the sun, which draped itself down my lip as I ate it, resulting in a rather attractive blistered lip.

As work had consisted of not a lot, I actually did get my butt to the swimming pool after work. I was expecting it to be really quiet, but it was insanely busy for pre-7am. I still managed to get 50 lengths under my belt in 45 minutes, not bad going, and of course, me being me, I downloaded a swimming app too, so completed my first challenge of swimming across Loch Ness and then some :)

I was rather disappointed in their swim passes though. If you pay up front you get a month free for every 3 month block, so a yearly pass would give you 16 months of swimming. I was hoping to set up a Direct Debit and get myself swimming, but you can only get the offer if you pay up front. Very frustrating, as who has £100 (for 6/8 months) or £200 (for 12/16 months) just hanging about nowadays? The best I'll get is 4 months for £60 - not quite as good eh? Oh well, it'll still be a saving on £4 a session. Swimming done and dusted I headed home, and as Hague was awake we had a little catch up before he headed to work and I headed to the bath (with snackage) before crawling into bed way, way too late! 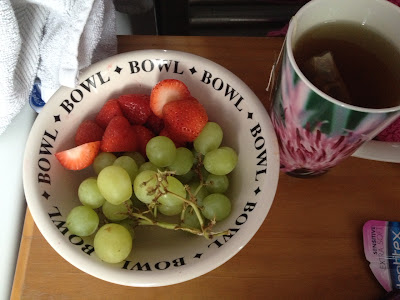 I'm hoping that tonight is my last night at work, but we shall see. I don't like to count my chickens, or plan my Friday's before I know for sure! I'm going to be heading out to do my Couch to 5K at some point anyway! Over the last couple of days I've had some overwhelming comments and messages about my weight loss. It genuinely does keep me going to know that you are all out there watching me and willing me on. It means so much, it really does, so thank you!

As I have been asked for some before and after shots I figured I'd share the cover shot from my Facebook page as it goes from one extreme to the other!

If memory serves...the first two are before SW, the third is at New Year, so 5st down, then 6st down, 7 down and the last one is at around 9st 10lbs gone! The Body Magic really does seem to have got those inches shifting though :) Next stop is dropping into the 14st bracket - something I can't recall ever weighing as an adult, although I must have breezed through it on my way up at some point.