I have neglected you all terribly, what can I say? I may have had quite a few long hours to work during this last week, and I may have been doing my Couch to 5K on the days when I wasn't working 12's but I probably could have got onto the computer at some point....but I didn't. Bad Karen.

Seeing as the last day you got a blog from me was last Monday, I do have a bit to catch you up on, so I'll do that first, starting with my weigh in on Tuesday, and the Woman of the Year awards :)

First, the good news, I lost 2½lbs, taking my total loss to 9st 5½lbs, and Hague lost 3½ getting him his 5½st award. The Woman of the Year awards was great fun, with seven of us nominated, and all of us recounting our reasons and journeys, all so very different, but all deserving of the title. 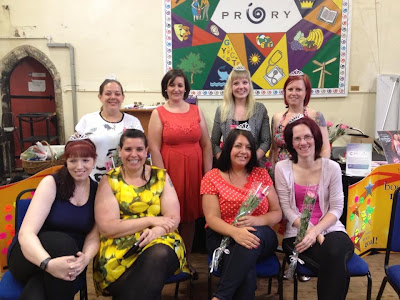 Our winner was the gorgeous Helena, sitting on my left in the spotty top, who has lost over 8st with Slimming World and just over another stone before she joined :) All was not lost though, as I got a beautiful rose and won the raffle! 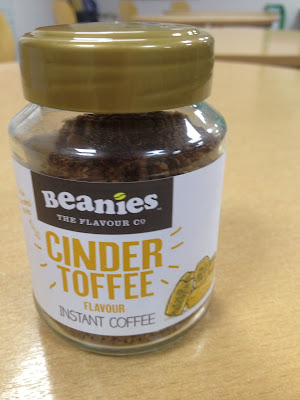 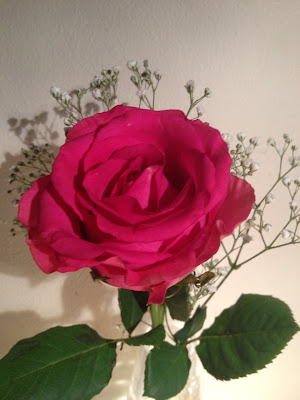 I then had to go to work, and the rest of the week pretty much consisted of eating  quick meals, and working, along with another note-worthy event, completing week 2 of the Couch to 5K programme on Thursday before work :) I had found the second week rather hard work, but go through it!

The only other highlight of the working week was payday, where I went a bit mad and bought All Of The Things..... 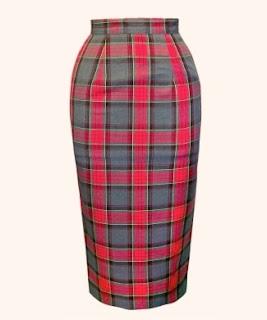 Including this beauty, which I didn't think would fit yet, but after a sneaky measure of myself I think it might be closer than I though, and some shoes for £5. I LOVE having spends lol!! Anyway, work was finally done and dusted at 5.30am on Saturday morning and I headed home to a quick bath and bed. I was then woken up by a grumpy Hague grumping around as he couldn't find his favourite t-shirt, but he soon cheered up and off we headed into town, just for a general mosy around the shops, but I ended up falling into more shops and buying All Of The Things once more :) Can we hear a Hell Yeah for a Hell Bunny dress in a Large? ;) 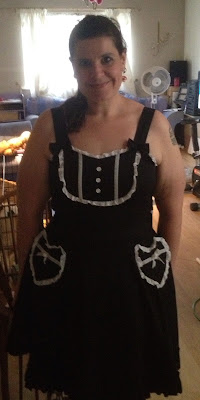 It was only £20, bargain, and a perfect fit, it certainly made me happy, as did spending the entire day with this gorgeous man. 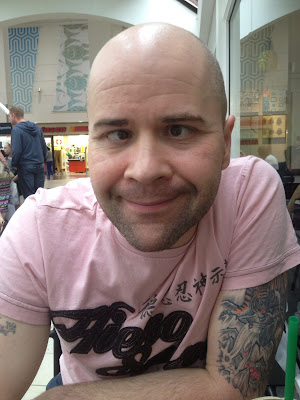 Who will probably tell me off for using this picture of him pulling a silly face ;) Due to only having 3 hours sleep I was dead on my feet quite early and so an early night beckoned for me....told you nothing overly exciting had happened this week eh?

So shall we get ourselves back to normality? With food and everything? Okay..

Well, first things first, despite going to bed early I was still sound asleep when Hague woke me up to tell me he was heading to work, and I had a lay in bed for a wee bit longer before I decided that I had to get myself up and out, as I should have done my first C25K run of week three on Saturday. I had pondered doing another couple of week two runs, as I'd found them significantly harder than week one, but figured that if I couldn't handle week three after a decent kip I'd definitely re-do week two. However, despite it being warm outside, and me heading all over the place in search for a quiet(ish) place to run in a seaside resort in August, I completed the run, and it felt easier than week two had as well. Very proud moment really! Once indoors it was definitely a case of needing to eat, and as I'd be sensible enough to sort out some toasted cous cous and frozen summer fruits before I headed out, that was breakfast! 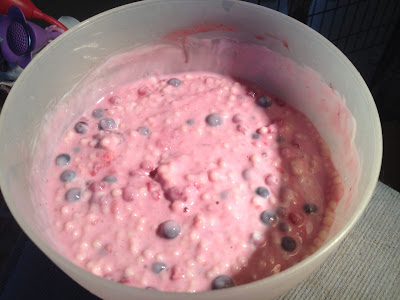 I then had a nice soak before heading off to see Hague at work, he was at the Elizabethan House museum today, and I fancied a look around, and of course took the chance to take some piccies too - as despite the forecasts it still wasn't raining! 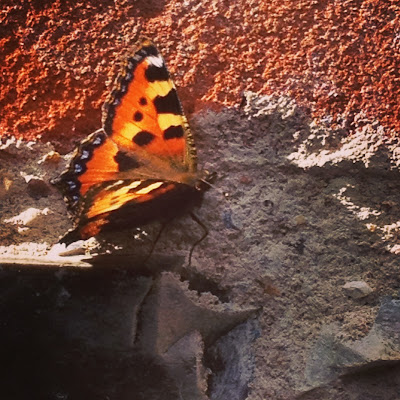 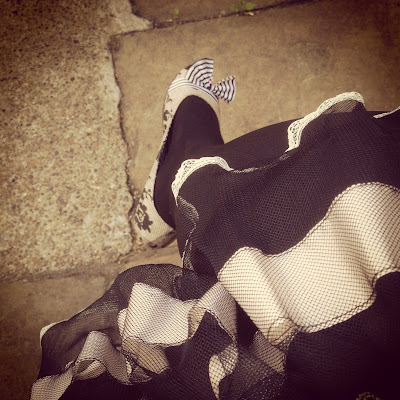 The museum was actually fascinating, so if you are in Yarmouth, take the time to have a look. I had to leave early though, as I was hit by an acid reflux attack - so headed home to take a tablet before the pain got too bad :( I had managed to get a tablet down me in time though, as by the time Hague got home I wasn't feeling too bad and so I had myself the same lunch as him. 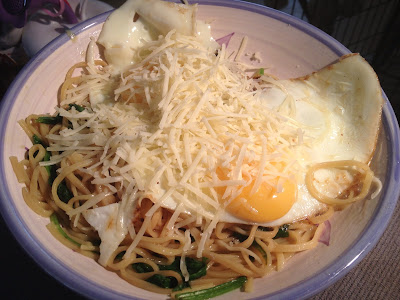 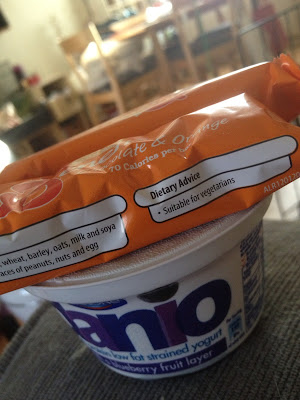 An eclectic meal maybe, but a good one. Noodles and spinach topped with eggs and cheese, with a tablespoon of sweet chilli sauce. Lovely! I then followed it up with my latest addiction, the Danio blueberry yogurt, 3 syns of utterly deliciousness.

We then decided to finally watch The Hobbit. We'd both been really looking forward to it and so settled down happily to lose ourselves in the world of Middle Earth....

But it was poo. Really poo :( We'd both expected so much ,but it was so disappointing. Luckily dinner wasn't. 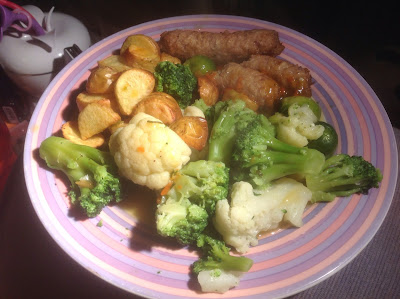 Well, it's Sunday! Roast dinner time! Syn free as well. Unfortunately, I seem to have worms today and so it was only a couple of hours later that I wanted more to eat! 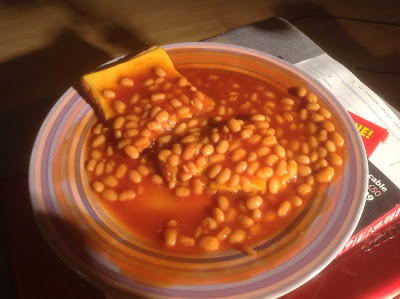 As you can see, I was SO hungry I had started eating before I could take a photo!!! And I needed dessert! 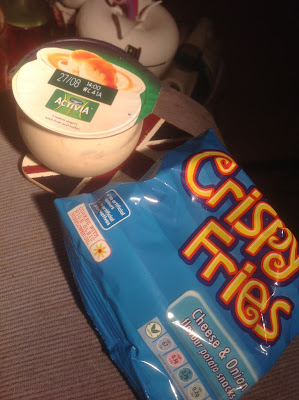 Hopefully the worms are satisfied for now, as it's just gone midnight and they won't be getting anything else to feed them tonight!

Not a bad day really. And rest assured I have been on plan for the rest of the week, I really want that 9½st award on Tuesday! Just because I haven't blogged it doesn't mean I've dislodged myself from the Slimming World wagon, I still desperately want to get to target, although I'll be honest, I've been feeling a bit down about my losses this week. For some reason I don't feel like I'm getting closer to target. Which I know is rather stupid as I blatantly AM closer to where I want to be, but I look at myself and still see flabby arms, huge legs and a large stomach. I'm not sure why it's getting to me at the moment, perhaps I just thought I'd be slimmer when I was down into the 15 stone realm? Who knows? I DO know that it won't stop me sticking to plan, and doing my damndest to reach my current target of 12 stone. I shall then see how happy I am with the body I'm left with when I get there....in just 3st 11lbs time....

That's what I need to remember, I'm getting there.
Posted by Unknown at 00:11