Waiting and Waiting (and Weigh In's)

I just adore waiting in all day for appointments don't you? I woke up at about 11, in plenty of time for my long wait to start as the slot I'd booked was between 12-6. So I got myself a lovely large coffee and settled down to watch some Come Dine With Me whilst I waited for the engineer to call to say he was on his way.....

I watched a whole week's worth of Come Dine With Me.
Hague came home from work and went back out again to lock up one of the museums.
I felt my mood descend into more and more of a grumpy one.
I tweeted my annoyance at British Gas for wasting my day.
I that stabbity feeling I often get when reading "advice" on various FB SW pages.

And still no phone call.

I rang British Gas, to be informed the engineer would definitely be with me before 6pm, but they couldn't be more specific.
I annoyed the British Gas Twitter account a lot more.
Hague returned home again.

At 5.20pm I got a phone call. From the British Gas engineer, sod's law I thought to myself, he's going to turn up too bloody late for me to make it to group, how wrong I was. After sitting in all bloody day he was cancelling the appointment as he'd been delayed. I think the phrase you're looking for here is mightily pissed off. I'd wasted the whole bloody afternoon, getting more and more annoyed for nothing at all. Funny though, when you have over 500 followers on Twitter, big companies seem to take notice of your complaining, and I should be compensated for being a prisoner in my own home for over 5 hours.

At least it meant I could make it to group. I was feeling utterly nervous, heavy, bloated and convinced I was heading for a gain. We had decided that we needed a picture of both of us though, as we barely have any, and those we do have are a fair few years old now, and so we asked Sacha to do the honours for us :) 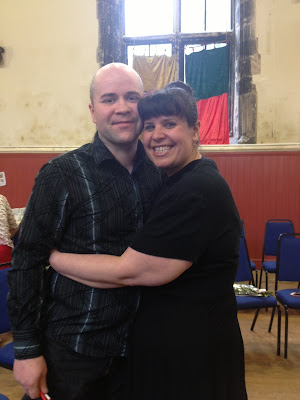 Bit better than this one eh? 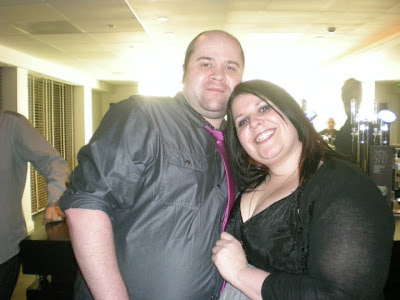 My fears were also unfounded, and the roller coaster ride continues, with a loss of 7lbs this week. I wish I could make sense of what my body is playing at. I've done nothing different at all, but got an insanely big loss this week. Here's hoping that me missing group next week due to shifts will settle down the huge yoyo pattern I seem to have got stuck in!

After group, we were both starving, Hague did himself some cheesey pasta, but I fancied something a bit lighter and so did myself a big old bowl of salad, with Jersey Royals and a couple of poached eggs, I had some Stilton and a tbsp of Hollandaise sauce in there too. It was SO good, really summery and tasty. 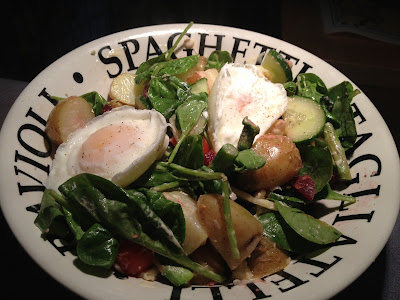 I had yet another of my freebie Danio yogurts for dessert, strawberry this time, on top of some peaches and strawberries. I must say, I'm converted, I've really enjoyed them, and I think I'll be using up the rest of my money off vouchers quite quickly! 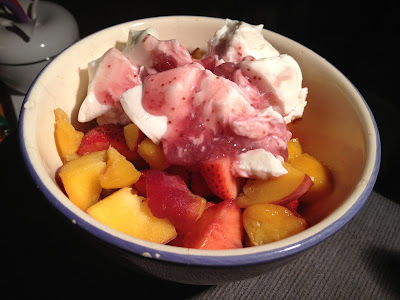 I then proceeded to tell the world about my weight loss, and spammed t'interwebz with the pictures of Hague and me and chatted away to various people in various online places whilst relaxing in front of South Park, soon enough the hunger pangs started up again, and despite the clock turning rapidly towards 11, we both decided to have a late dinner. Hague had been inspired by our Consultant and whipped up a chip butty, I, having 3 Healthy Extras left, went for cheese on toast. 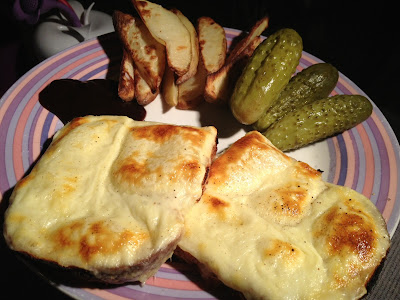 Perfect late night tea, if you're not worried about nightmares that is. Although I'd picked up just mature Cheddar, rather than extra Mature, and so it wasn't the tastiest of cheese on toast, but such is life. With food finally done and dusted for the day, and a lovely hot bath beckoning, my mood has improved vastly since I was ready to get all stabbity at FB and British Gas. I'm sure you're all pleased to hear that :)

A day of both scale and non-scale victories, with people at group once again being so kind about how I was looking, as well as the reaction to our picture on FB. I also realised, several hours after group, that I'm now just 3lbs away from my 9 stone award. NINE STONE. I can barely get my head around that little fact. It seems alien to me that I have lost 8 stone and 11lbs, so much weight. So much has changed in this last year, but one thing that has made me smile is the comment that the lovely, and ever supportive Aakeela left on our photo, saying what a massive difference it was, but that the one similarity was how happy we are. She's right, lots of things have changed, but that really hasn't. I'm a happy bunny with my Man, even if he looks like a totally new one right now :)

Tomorrow shall finally bring some Body Magic. I WILL get the Zumba game out of it's box and into the Wii, and I will also get off my bum and do some!
Posted by Unknown at 00:00

Email ThisBlogThis!Share to TwitterShare to FacebookShare to Pinterest
Labels: before and after, facebook, feeling the love, food diary, friends, good day, loss, non scale victory, positivity, progress, slimming world, thank you, the new me, weigh in