I had a truly lovely weekend, it may have involved far too many syns on Saturday night - but it was rather marvellous.

As once again I've been too lazy to blog, I'll just give you a quick photo tour of the weekend! 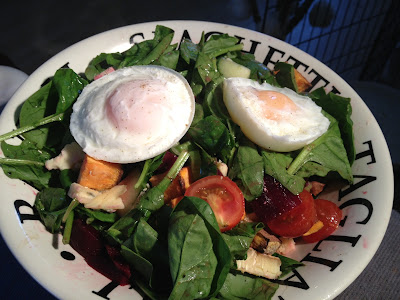 Delicious brunch, as I fancied a change. 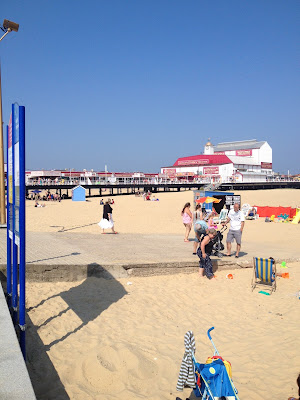 Heading out to enjoy the sunshine, plenty of walking (in my lemony dress). 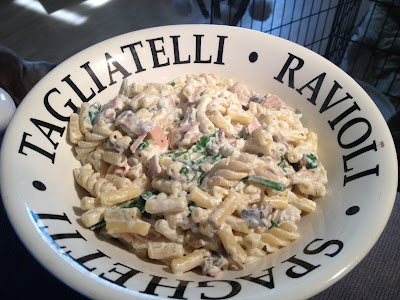 Easy, cheesey pasta for lunch to line our stomachs for much drinking. 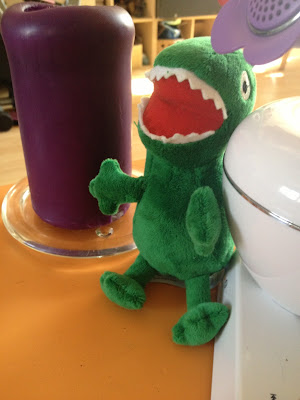 Mr Dinosaur is mine at last! 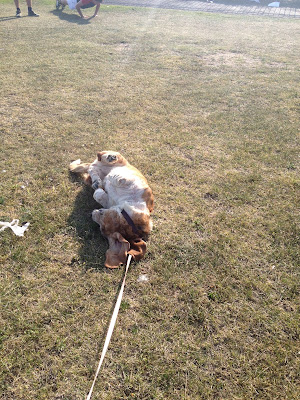 A walk with Boo - yes she does spend most of her walks upside down!

Doesn't that look like a good day on Slimming World? Body Magic? Healthy Food? Marvellous, then it all descended rather rapidly....

Mainly due to this... 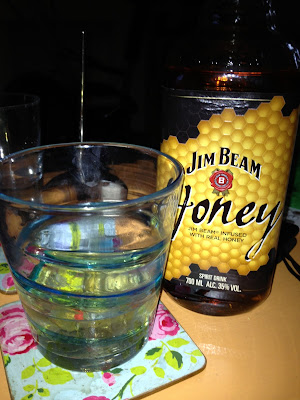 With added vanilla vodka and JD Honey too! We were sensible enough to prepare syn free snackage though and so a curry loaf and some little quiches saw us through the night. 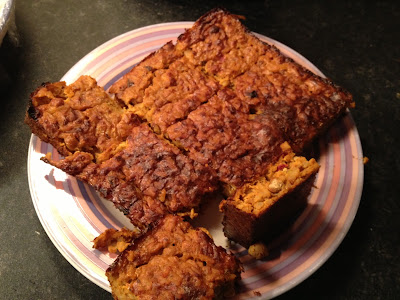 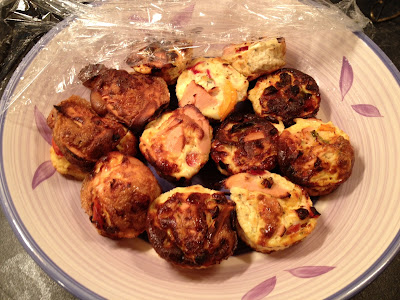 With a friend joining us, and much booze drunk, we had a lovely evening, I even managed to get up at a reasonable hour on Sunday - well I had to, I wanted to watch the tennis! I'd decided that as it was the Wimbledon finals, I'd attempt the syn free Pimms. 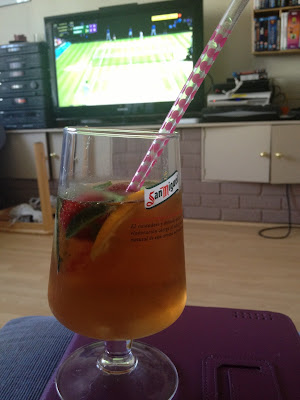 Which was rather lovely, and couldn't be easier, as it's just a tbsp of balsamic vinegar added to each litre of lemonade along with ice and fruit! Breakfast followed swiftly on, as well as strawberries. I really wanted to get into the spirit of Wimbledon ;) 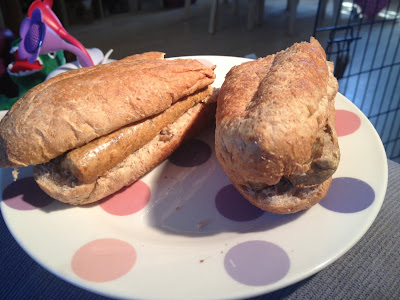 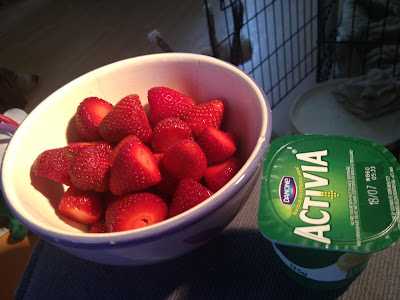 Of course, I'm sure you all know the outcome of the phenomenal match yesterday! Silly as it sounds, it wore me out just watching it! I certainly needed to get myself a nice filling lunch afterwards anyway - and look what we picked up at Asda.... 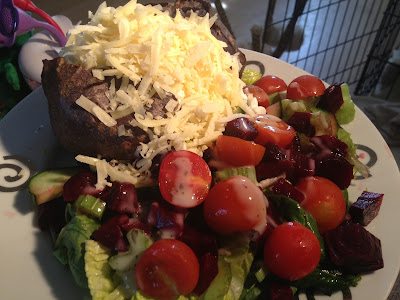 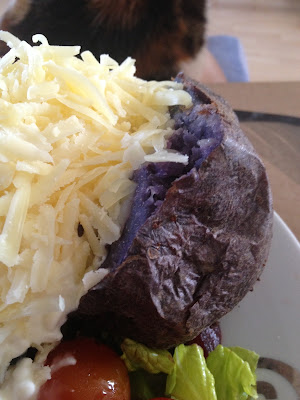 A PURPLE potato! How amazingly awesome?? It made my lunch all the more fabulous, and I shall be buying them again! Of course TOK approved :) I really had been hit by the wearies though, and so not long after a quick snack I headed up to bed! 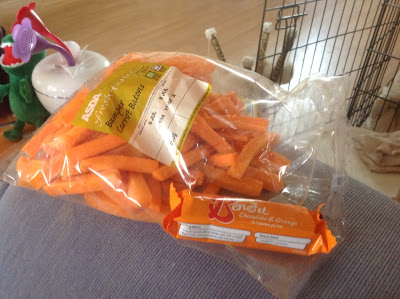 Those of you that follow my blog might know that this week is my week of earlies, the 4.20am alarm of doom, the never-ending whinging and of course star week as well! Not this morning though :) We had a work Team Building day, and after a democratic process fraught with cries of fix and two or three recounts, we finally ended up on a morning of bowling followed by lunch :) I figured that I'd be less likely to pick with breakfast inside me and so I got up nice and early to sort one out. 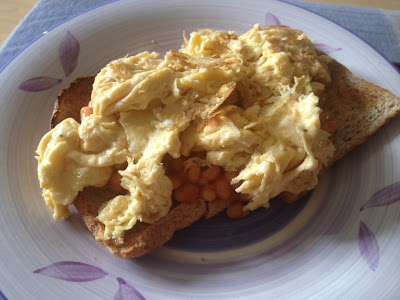 Just scrambled eggs on toast, but it did the job before I headed out. I'd decided to park at work and walk the mile or so round to where we were meeting, all good Body Magic, and I still managed to get there early. Bowling might have started at ten, but we had a free drink voucher and it's just rude not to make the most of it.... 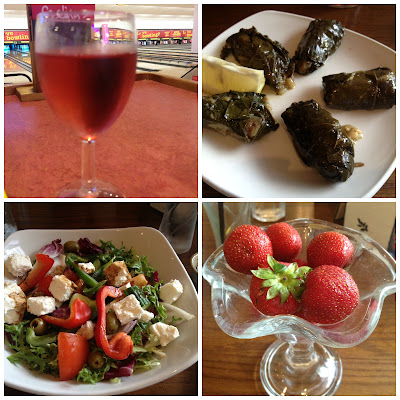 After bowling - where I managed to achieve the amazing scores of 76 and 93 - we headed to the restaurant. A place called Artorios which does a variety of Mediterranean foods and Meze too. I chose what I thought were the safest options. Dolmades, which are rice stuffed vine leaves, a Greek salad with the dressing on the side, and plain strawberries for dessert.

I allowed a HeB of a tbsp of olive oil for the meal, plus both my HeA's to cover for the Feta, along with the 125ml glass of wine (4½) and the handful of olives in the salad (8 for 1syn) I reckon I made pretty good choices for lunch. I feel a big pat on the back should be awarded to me for resisting the numerous offers of cheesey flatbreads, naughty desserts and alcohol. Tough going though! But I managed it! I also managed to spot more Gorillas.....5 down, 48 to go! 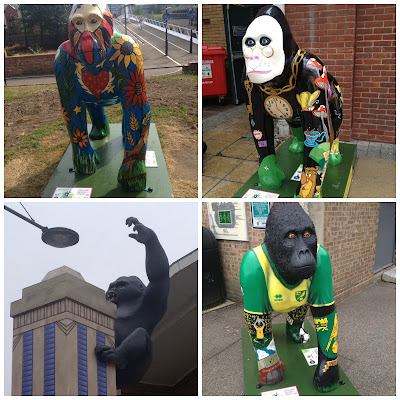 With another healthy walk back to the car, and an unremarkable drive home I got indoors and I was hungry again. Fair enough lunch had been at about 12.30. Fair enough I'd only had some dolmades and salad, but seriously, not quite 5 and I was already hungry again?? Hague was sorting himself out a stir fry, so I fluttered my eyelashes and asked nicely and he did extra for me. 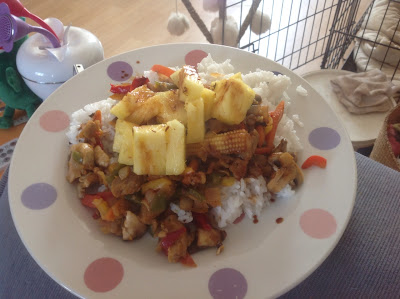 Just ½ a syn there for the sauce, and the pineapple wasn't cooked, just dumped on top afterwards ;) I even had some left for work tomorrow. I would have thought that would fill me up, but it really wasn't much later that my bottomless pit of a stomach wanted more food! I went for a very random mix - a sort of potato salad type thing. 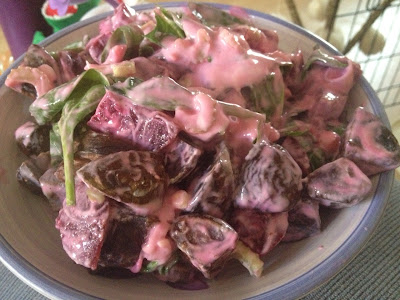 The most purpley potato salad in the whole ever :) Purple potatoes and beetroot truly make a beautiful meal! I even needed dessert. 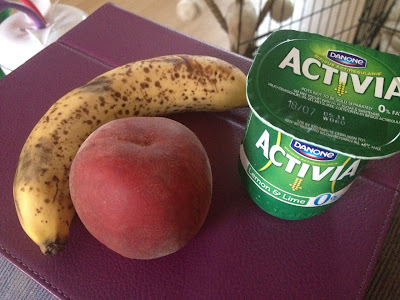 I'm sure you'll all be pleased to know that I'm satisfied. For now. Thank goodness I have to get to sleep soon otherwise who knows what I might eat next! I really have been having tons of hungry days recently, perhaps it's all this Body Magic malarkey? I'll blame that anyway, it sounds good ;)

And so it's off to bed time for me, with a 12 hour shift looming tomorrow, but at least I'm only in for 3 days....Yes, 3 days. Why is that? Because on Thursday TOK and Doug are coming!!!! SO excited, I just hope there are enough hours in the day to...

See Despicable Me
Have tea and cakes
Gorilla hunt
Visit the Time and Tide Museum
Have an ice cream on the beach
Have a picnic
Explore the exciting shops in Yarmouth
Explore Norwich
Go on the land train
Go on the Landau's (horse drawn carriages)
Have a pamper night
Have a few drinkies
Watch girlie films....