Nights really aren't the most exciting of weeks, although I did actually get up at a reasonable time yesterday, had to get me some Hague time after not seeing him at all on Wednesday :( I woke up feeling rather awake though - makes a pleasant change!

However, I stumbled straight into danger....in my own home....damn Facebook and your targeted adverts! I was powerless to resist the draw of a Threadless sale, on the day before payday....pennies were burning holes in my pocket and the prettyful t-shirts were just $10 each and before I knew it they were jumping into my shopping basket! The dangers of the internet! 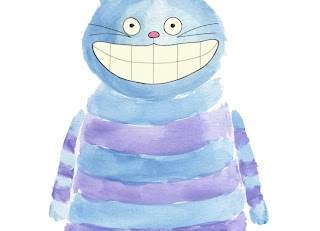 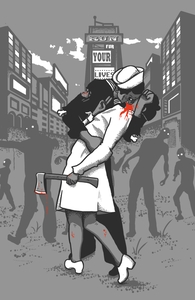 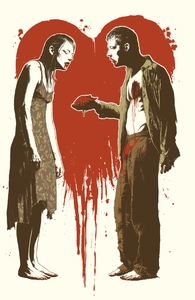 Aren't they amazing? The Cheshire cat one is UV sensitive too, so the cat only appears in the sunshine, perfection :) So with my shopping addiction out of the way for a few hours my mind turned to food. Lazy food for a change! A jacket spud. 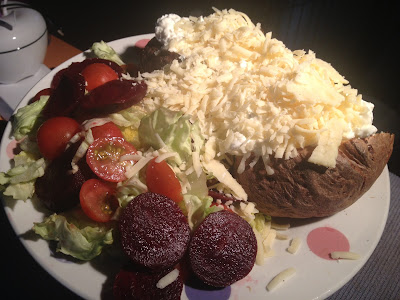 Super cheesey, with onion and chive cottage cheese and two HE's worth of cheddar. Yummy. I was thoroughly enjoying me early evening with Hague, just putting the world to rights and having lots of cuddles and so I didn't really want to drag myself to work, but needs must and so off I went.

Damn it was warm in there last night though. So muggy - and that just drains you so much. Luckily the machines are still behaving so there wasn't too much rushing about, and as I was covering breaks on other machines the night seemed to go past quite quickly. First break came around fast, despite being later than normal and, I was already rather peckish and so added Graze noms to my normal first break snackage. 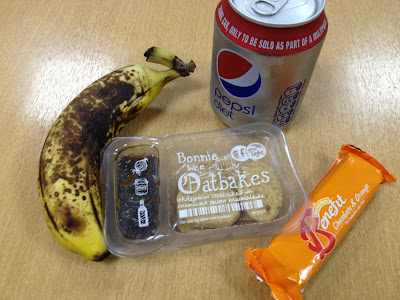 I think the oatbakes are one of my favourite Graze nibbles. I wish I had some cheese though, it would have made them perfect! Suitably fortified it was back to the sweat box for more "fun" before I could eat again hehe. 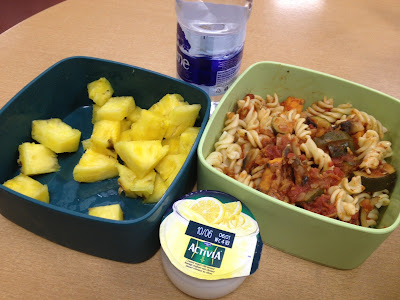 More leftovers to the rescue, this time is was the excess lasagne filling mixed with pasta along with some pineapple and a yogurt. Surprisingly filling. My lunch box is still getting compliments too :) Plus I had comments last night asking how I can eat so much and lose weight....of course I responded by saying it's because Slimming World is bloody marvellous!

Anyway, the night was whizzing past rather nicely. Plenty of steps registering on my little FitBit and it was soon time for my last break, got to love the final break - the end of the shift seems so close afterwards. 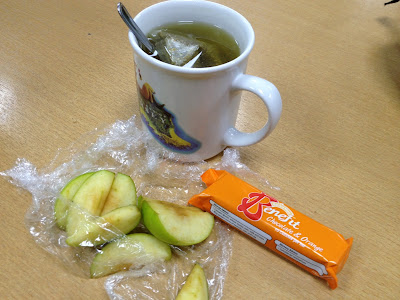 I've become quite partial to a camomile and vanilla tea for my last break, it seems to chill me out quite nicely and gets me ready for bed, albeit a couple of hours too early!

With not much to do, I was spending far too long on the internet at work. Sorting out wages and budgets as it's payday, divvying out spends for me and Hague and the house fund. Even with my wonderful girlie weekend looming, and my awesome t-shirt purchases I was tempted once more. This time by the evil empire that is Rocket Dog, who were cruel enough to email me about their summer sale offering 60% off their beautiful summer shoes, most of which I've been lusting over for several months.....oh the merciless nature of the purveyors of my favourite shoes...I did ponder for many an hour minutes but once again, purchases just appeared in my shopping basket and before I knew it I was checking out and the proud owner of these absolute beauties. 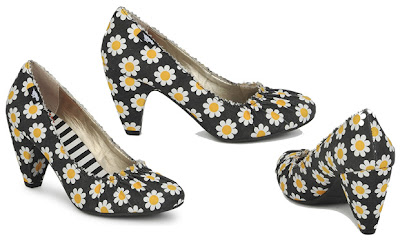 Oh the beauty, can you blame me?? Really?? Didn't think so! So much excitement for a humdrum night shift eh? So with my night shift done, a happy little me headed home to jump into a cool bath after spending the night sweating like a pig. Lovely.

Quite a lovely day all told, and just one more shift stands between me and the weekend, although I should have done the shopping today and instead I have sat, texted TOK and blogged....ah well, Asda on Saturday it is! I hope everyone who works normal hours, and has finished for the week has a bloody marvellous Friday night....think of me in my little sweat box won't you?