It's been a long old while since the last one, but today it was finally time for another girlie lunch. With me missing weeks off and my Sister once more in the ranks of the employed we've not been able to sort out a time for us all to meet up for a nice meal and a natter. Originally today was just going to be my and Mum again, but we managed to re-jig things so my Sister could join us a bit later than normal.

As lunch was a bit later, it also meant I could have a bit longer in bed, alas my body wasn't up for that, and I was up awake before 10am anyway, and so I had a lazy morning, got a blog up and had a large coffee before prising myself off the sofa and heading off to The Third Crossing in Lowestoft for lunch.

I'd not been there before, but it's a favourite of The Parentals, and so I was looking forward to it. The menu isn't particularly extensive for vegetarians, the lunch one only had one starter and one main for us weirdo's - but after talking to someone at the restaurant, I was able to pick from any of their menu's so that was me all sorted, as I had really wanted to exercise some damage limitation rather than my normal gung-ho attitude to these lunches. I really would like that 3lb on Tuesday ;) I started off by ordering a small glass of wine, rather than a large one, so just the 4½ syns there. 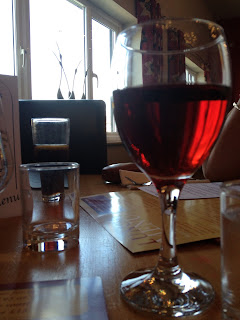 I may have been a bit fussy with my ordering, but it all saved a few syns here and there. I asked for my starter without the filo basket and with the salad dressing on the side... 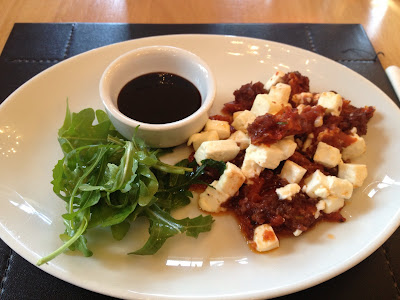 So I definitely saved there, as filo can be quite high in syns. Obviously this still had sun blush tomatoes, Feta and was cooked in oil, but that's what my Healthy Extras are for, and as I have Feta often enough, I know that this was around a HE's worth anyway.

My main course had seemed to be quite a good choice, a tomato based gnocchi bake, but when it arrived it had a breadcrumb topping :( 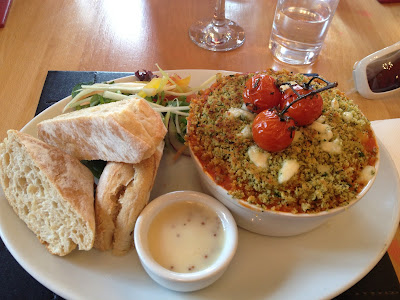 Once again though, I had the dressing on the side, and as tempting as it was to mop up the juices with all that ciabatta, I only had one piece. I'm pretty sure there was marscapone, or something similar in the bake though, but once again, there isn't much mozzarella there, and so I was once again thinking HE's could take some of the strain of my main. So far, so good.

But then....a dessert menu was placed in front of me....they all looked SO good, more than that, they all looked utterly divine, mango and passion fruit cheesecake, dark chocolate brownie, chocolate fondant, sticky toffee pudding.... 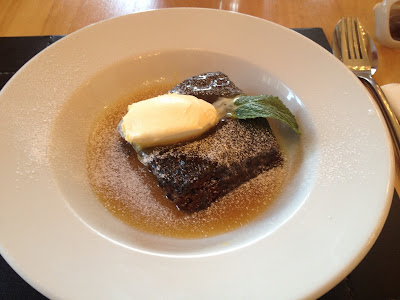 Before I knew what was happening my mouth was opening and I was ordering a sticky toffee pudding. With butterscotch sauce. And clotted cream. It was worth every, single, sugary, sweet, sticky, moist, luscious syn that it was packed with :) Thank goodness these lunches are few and far between now eh?

However, with my sensible synning of the last few days, and my reasonable choices for my other courses, I feel that I didn't do too badly. Of course the pudding probably used up the majority of those 3 days of minimal syns, but that's why I did it, and you won't find a guilty conscience here - maybe a grumpy cow on weigh in day, but we shall wait and see ;)

With lunch over and much nattering done, off we headed our separate ways. I stopped off at a garage on the way home to get a quote on how much it would cost to get my mysteriously dented bonnet fixed (it's a shortly to be returned lease car) and cringed to be told it would be over £250! Ouch! Here's hoping that I can find a cheaper quote eh? I then headed home, through awful traffic and planned to relax for the rest of the day. However, whilst I was out the postman had been and so I excitedly opened up my parcels. One contained beads for me to put in my weight loss jars, but I obviously have size issues and the 4mm beads I ordered were teeny weeny and no good whatsoever for what I wanted. The other parcel was much more fun and contained my treat to myself for losing 8st. What's better to celebrate weight loss than syn free ice cream? Oh I know, I talk all the time about not treating myself with food, about not using it as a reward - don't worry, I didn't ;) 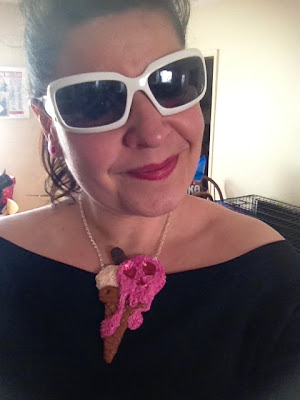 It's a fantastic necklace - with a matching hair clip/brooch. Perfect eh? It's a beautiful creation by Jo at RockNCustom designs, I love it! As my beads were utterly useless, I started to peruse ebay looking for something more suitable, getting frustrated at just how expensive it would turn out to be, when I realised I was looking for pebbles....

I live about 400 yards from the bloody beach and I'm pondering buying pebbles? Sometimes I worry about myself! So I collared up Boo and off we headed to plunder Great Yarmouth beach for several hundred pebbles to fill up my jars :) 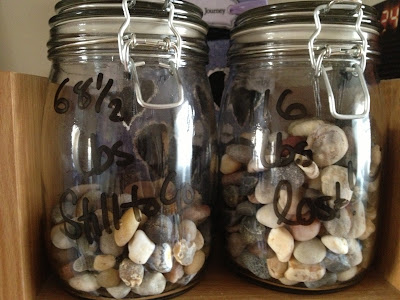 Not the clearest picture maybe, but every pebble in the jar on the right is ½lb I've lost - and the jar on the left are all those pesky ½lbs I still have to shift. It's a very visual way of seeing your progress, and with the help of the beach it was rather bargain-a-licious too ;)

After that we popped out yet again for a couple of bits and bobs before I finally managed to plonk myself on the sofa. After not very long I decided I was hungry again and went for something syn and healthy extra free. 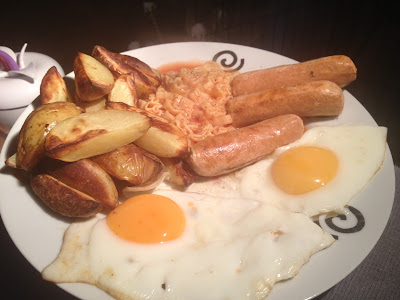 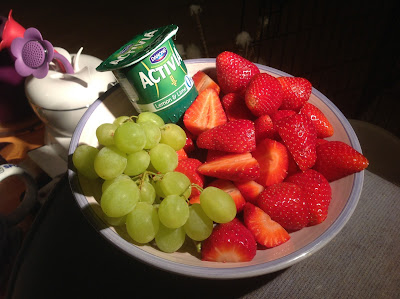 The sausages are the low fat Quorn ones, so the meal was syn free, but not smile free as I had Hello Kitty spaghetti too, followed up a bit later by some lovely fresh fruit and a syn free yogurt. The evening was whiled away on text and t'interwebz (for a change) whilst watching the new Total Recall film. Which was rather poo. Give me the cheesey Arnie version any day, but I did enjoy the little homages to the original.

I shan't do a food diary today - as it would involve a hell of a lot of guesstimation, however, I reckon this lunch wasn't as bad syn wise as some of my girlie lunches have been. Only time will tell though eh?

And so the week draws to a close, and work on Monday is looming ever closer. Before then though, I finally have an appointment with my marvellous hairdresser, so my hair will no longer be a straggly, grey mess, and once I am prettified, Hague is working all day so I can get stuck into sorting the bedroom once more whilst he's out! I'm actually quite concerned over how much that excites me :(