For some reason I woke up on Thursday in the most amazing mood. It was 9am, so far too early, but I felt strangely happy. I was even forced out of bed early due to a message from Helen saying she was going to pop round - so no excuse to be lazy! I wasn't feeling massively hungry though and just fortified myself with a quick coffee and a banana to tide me over until proper breakfast. Yes, I am in fact a Hobbit :) 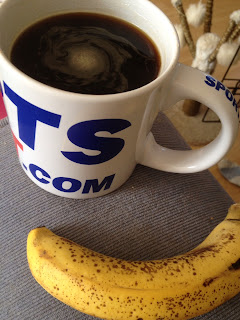 The arrival of Helen and her husband had stirred Hague, and so we were both up nice and early, and decided to head off and see Iron Man at last in the afternoon. As it was so early that meant I had time for a nice cooked breakfast, and a bath before picking a deliciously eclectic mix of clothes and heading out. 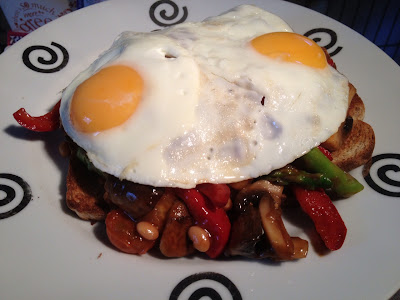 Even though I'm not at work, I'm still focused on my 5 a day challenge, and it's definitely helping me to feel a lot better, not to mention regular ;) Do we need the happy poo picture again lol?

Anyway, after food and deciding what to wear, which didn't involve the stripy tights I'd tweeted about in the end, but a pink tartan skirt instead, off to Norwich we headed armed with our free cinema tickets to drool over Robert Downey Jr enjoy the latest Iron Man installment. My verdict? I enjoyed it, it was a bit of a mish mash, with a lot going on, but it was good. Although in my mind, you're never going to beat Micky Rourke as an Iron Man baddie :) But hey, RDJ was looking mighty fine, and was in just about every scene, so I was happy! Despite having a voucher for a free popcorn, the only thing I splashed out on was a bottle of water *polishes halo* although that of course meant we left the cinema starving, and had to walk past Pizza Hut, Chiquitos, Bella Italia, and Frankie and Benny's to get to the car park. Which we managed :)

We then had to detour to my friend Shane's as he'd bought some courgette plants and apparently is under the impression that they are hard to kill, so ol' blackfingers here is going to give growing her own veggies a go! How exciting is that? So here are my green babies, who shall be nestling nicely in their grow bag very shortly :) 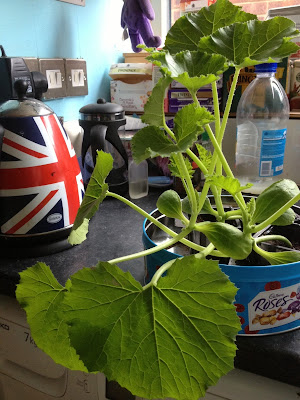 With the green babies on the windowsill it was finally time for dinner as I was definitely starving by then! Hague went for fish and chips, but I'd fancied a potato salad type thing. It ended up having just about every vegetable in the fridge in it, plus two Quorn sausages, but it was delish! 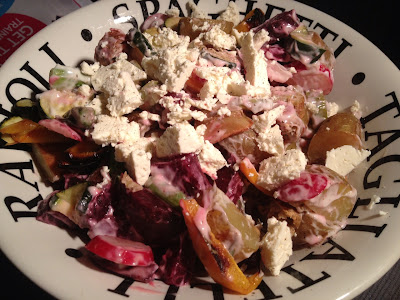 Plus it ended up being very purple due to the beetroot, and you have to love purple food! After dinner I fancied something sweet and for the first time in ages, out came the Mikado, along with an apple and a yogurt. 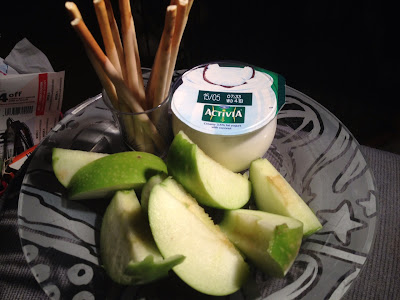 I've missed my Mikado and they went down a treat. With those eaten, and with no nap today, I decided on a nice early night and so headed up not long after 10, and in a very odd move, Hague joined me after about an hour, a very early night for him!

Unfortunately by the end of the day my amazing mood had vanished completely :( I need to focus on the good things that happened yesterday. 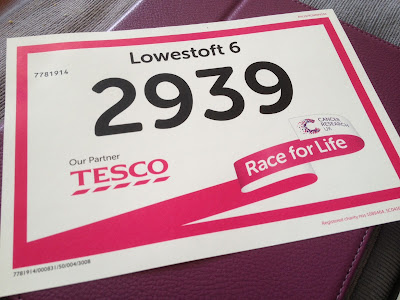 My Race for Life number - so y'all know I'm definitely running walking it now, so no excuse not to look for those spare coppers down the side of the sofa and sponsor me ;)

Just click this whole sentence to be magically taken to the JustGiving page where you can give as little or as much as you can afford.

Hope you all have an amazing Friday x