Twitching on a Twelve!

Today’s blog is brought to you by the substance, Caffeine and the number 12. 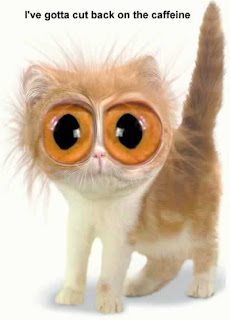 After my lovely, long, weekend, it was back to the grind today, and as an extra special bonus I was heading back to work for yet another 12 hour shift. Now, I know quite a few of you raise concerns about my working hours – so I’ll attempt to break down how it all works for you, so you don’t worry too much about me :)

I get paid for 1865 hours a year, which works out at a weekly average of just over 39.5 hours a week, based on working 47 weeks of the year. 1763 of those hours are accounted for in my roster, with the additional 102 left as reserve hours. These are used when we are needed to work extra 12 hour shifts. Now, my shift pattern goes through a 4 week rotation, a week of earlies (which includes the Saturday), nights and then 2-10pm. 12 times a year that is then followed by a week off, the 13th one is a week I have to come in instead. Due to those weeks off (which are unpaid, except for the usual 25 days holiday allowance), the weeks when I’m at work are quite high in hours – that’s the payback for the weeks off. So much as I moan (a lot) about long hours, and how tired I am, I prefer to work the long hours when I’m at work to keep those lovely weeks off, to me, it’s worth it.

I hope that has put some of your minds at ease, although it’s rather lovely to get such caring messages from people over my work hours, it’s appreciated :)

I’ll stop boring you with my roster now and get back to my Monday “morning” which started at around 9am when the binmen woke me up and I drifted in and out until just before 2pm when my alarm went off to go and pick up Hague from the station.

I was really tired, but decided to get myself fed rather than heading back to bed, and so whilst Hague told me all about his weekend and loaded the dishwasher, I made a rather lovely breakfast. 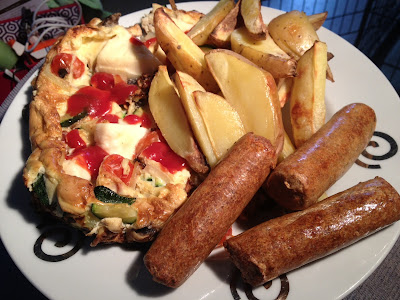 An omelette with onion, courgette, mushrooms and cherry tomatoes and topped with four Laughing Cow extra light triangles, plus wedge and some Quorn sausages – plus a tbsp of tomato sauce. Perfect to get me ready for work J I also threw together some magic soup ready for work! Although after eating my breakfast, I started to fade fast and grabbed myself a quick hour snooze before I had to head to work.

I was feeling very tired, and the prospect of 12 hours ahead is never a nice one when you’re feeling weary, but needs must and so I got on with the delights of dealing with two temperamental machines. Luckily, first break came along nice and quickly and a much needed caffeine hit was enjoyed, along with some fruit. 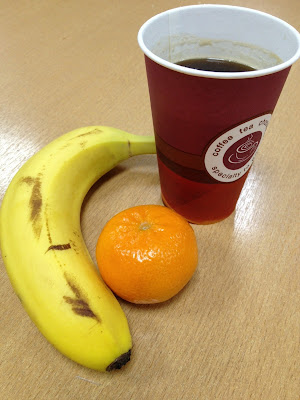 ﻿I even got in a cheeky extra break, with more caffeine before the end of the late shift arrived bringing with it lunch number one. 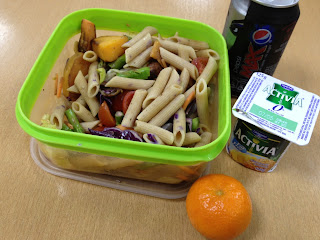 The rest of the pasta salad I’d had on Saturday, along with a yogurt and clementine, and as there was nothing else to drink, a Pepsi Max….I think we’re now approaching caffeine overload levels! After my first lunch, the rest of the shift doesn’t seem quite as daunting, with just over 7 hours left it seems much more manageable, I still needed yet more caffeine during my next break though! 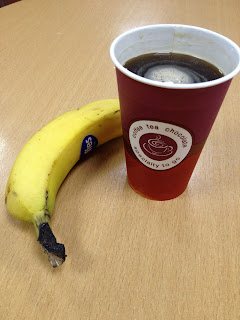 Even after all the food I’ve put away today/tonight I started feeling hungry again at about 1am, a good half an hour before Lunch number two – definitely a hungry day today! I do tend to bring lots in for 12 hour shifts though, and so my second lunch was just as big as the first! 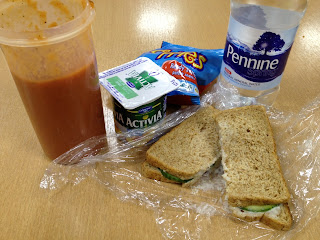 The magic soup I’d whipped up earlier, along with a sandwich (Laughing Cow extra light triangles and cucumber), Aldi French Fries and another yogurt. Water had finally appeared in the tea room as well, and so the caffeine finally made way for some good old fashioned hydration! No more caffeine though, I do want to be able to sleep tonight!

My final break was the signal that I was on the home stretch, and so a Benefit bar and yet more water were on the menu to see me through until the end of the night. 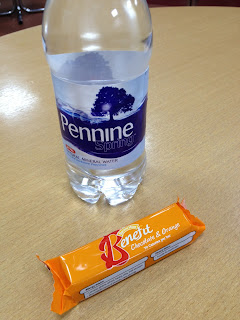 So there we have Monday, and next stop is weigh in tomorrow! It seems forever since I've been at my own group, and it has been a while, 4 weeks and so I can't wait to get back there. Much as I love visiting the Wednesday morning group, and catching up with my friends there, there is nothing like your own group when you can catch up with how everyone is doing.

As for tomorrow's weigh in, just about any loss will be a result, as here are my important numbers.....

So as I say, any loss will see me hitting a milestone! It's just a case of wait and see to see which one it is :)