I'm sure the relief from you all will be immense when I tell you that I woke up today feeling tons better. My mood was happy, and I'd actually had a decent kip! Even though I woke up at 8.30am I felt marvellous. It's amazing what a good night's sleep can do for you - so hopefully the whinging and moaning will return to the normal background levels, for a while at least.

As it was so early (for us) when we emerged, a cuppa was required before I worried about food. Thank goodness Hague was up in Barnsley last weekend, as he'd stocked up on Ringtons for me, so I can have my favourite tea to get me started. 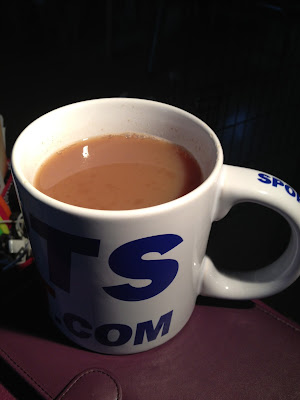 No better way to start the day for me, and I had another couple of cups before we headed out! I shan't get ahead of myself though, as before our days activities began, breakfast was a definite requirement. 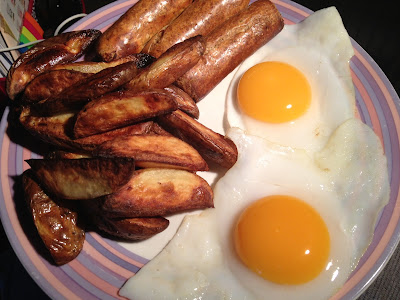 After watching a programme on British food, and how duck eggs are neglected nowadays, I wanted to pick up some as I hadn't had any in years. We did that at Tesco yesterday and so I had them for breakfast, bloody handsome they were too. Rich and delicious, a nice little treat. I'd also picked up the Quorn Cumberland sausages and they were rather a big hit too.

After breakfast, and lots of tea, we had to get ourselves up and out to go and pick up the shopping. Not too many substitutions today either, so that was a bonus! With shopping dropped off we were heading out again to a local museum. I say local, it couldn't actually be much closer seeing as it's about 300 yards down the road :) We were popping in as an old school friend works there now - we went to school 150 miles away together, and now live in Yarmouth, small world - and Hague has applied for a job there, so we went for a look around. I'd always wanted to visit, and I must say I had a fabulous time. I really do love living in a town with such a long and varied history, and if you are ever in my neck of the woods, you must head to the Time and Tide Museum. That's an order :) 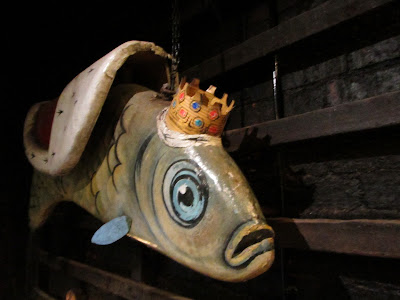 With several hours spent catching up with George and immersing ourselves in the history of the town - and the smell of smoked herring - we had to head home, as his Hague-ness hadn't eaten and was rather peckish! I figured I could probably do with some lunch too, but put about 2 minutes of effort into mine :) 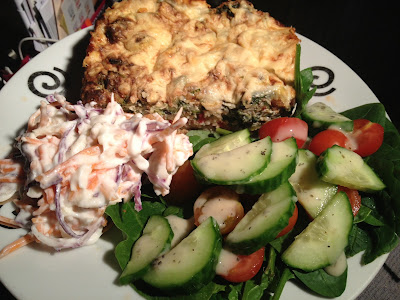 The rest of Thursday's quiche, along with some coleslaw and salad. Quick and filling, just what I like! Especially for the weekend. As we'd been at the museum for so long, the day was getting away with us and it was soon time for the football. Hague's club Barnsley had made it into the quarter finals of the FA Cup and were playing Man City, and so with everything crossed we settled down to watch...me fully armed with some snackage.. 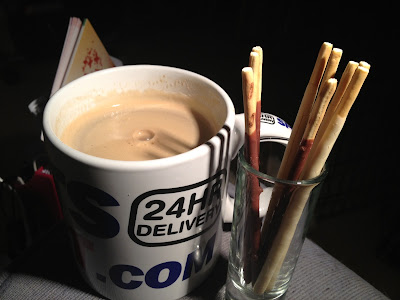 ...and then turned it off again when they were already 3-0 down after about half an hour. Oh dear. Luckily Hague is a realist, so wasn't too disappointed :)

After a lazy afternoon thoughts turned to dinner, and I decided to make some of my favourite soup, spinach and broccoli, with some gnocchi added in. 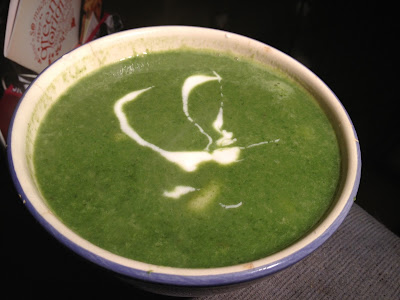 With the gnocchi added in there, it was immensely filling. This is definitely a favourite of mine, so I'll recap the recipe for you.

As always, just use my tried and tested method, all in the pan, boiling water poured on then cooked and blended! Today though, once the soup was blended, I put it back in the pan and added in 125g of gnocchi and let that cook for about 5 more minutes. I was then feeling a bit cheffy so swirled in some natural yogurt ;)

SO filling! For once I actually ate until I was stuffed, simply as I'd put my HeA in there, so had to eat it all! It was rather nice though, and I wasn't uncomfortably stuffed for long. In fact, it was only about half an hour or so before I needed a touch of sweetness and so had a handful of grapes. 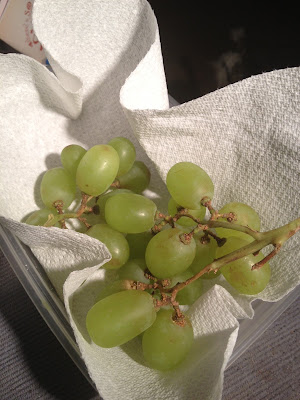 During my lazy few hours this afternoon, I was doing my usual and meandering my way through the various Facebook SW pages, and once again I was shocked at the amount of misinformation that people seem happy to declare as fact when it comes to the SW plan. Today, I've read that Asda pitta breads are still a HeB, that you can't have two of the same HeB on a red or green day and that you must reduce your syns and only eat superfree foods the day before and after having a flexi day. Now, I appreciate that for some people, following the plan-ish will work, but I do wonder where some people get their ideas from....for me, if you want to follow SW, go to a group. If you can't commit to going to group every week you have two options if you actually want to follow the plan properly. Sign up online, or go to a group, join, get the pack and don't go back. Personally I need group, but each to their own. At least if you have the information in your hands you will be protected from some of the more bizarre advice out there. In the spirit of being a bit of a hypocrite though, I shall hand out some SW advice of my own, which I would hope you all follow :)

I shall take off my dictatorial hat now - but I would hope that most of you, if you're serious about your weight loss journey will be doing all of those anyway, and if you're not.....perhaps you should ask yourself why you're not?