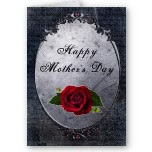 My start to the day was rather disappointing. Today may be Mother's Day, but I laid in bed waiting in vain for Boo, Flumpy or Jade to bring me breakfast in bed, or even a cuppa...nothing :( Shameful behaviour from the animals, I won't take the fact they're animals as an excuse ;)

In all seriousness, Mother's Day isn't a big deal for me, I couldn't take the responsibility of children just for the chance to have a card and breakfast in bed once a year :) However, I have a Mum, obviously, and so we were heading to my Sister's to see her today, first things first though, and we finally dragged ourselves out of bed, I fortified myself with some tea and then set to making myself a rather lovely breakfast. 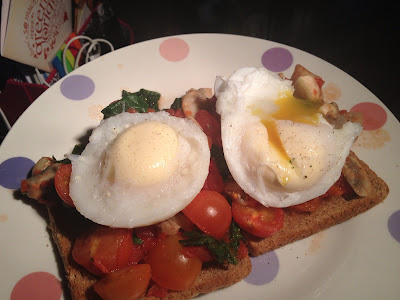 The last of the duck eggs, poached on some toast, with mushrooms, cherry tomatoes, tinned tomatoes and spinach. Delicious, and I think I'll definitely be treating myself to duck eggs again as it made a lovely change. I had to pop out to get some flowers for my Mum, as I wanted them fresh, and rather than getting a ready made bouquet, I bought some separate bunches and made one up myself. I got tons of flowers in her favourite colour and even if I do say so myself they came out rather well :) With the fresh flowers bought, I squeezed a snack in before we headed out to see everyone. 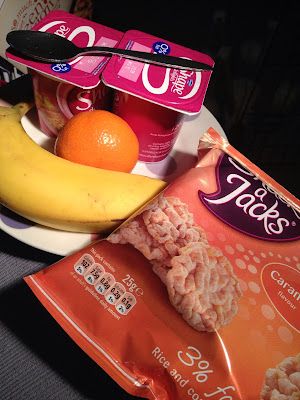 I wasn't sure how late we'd be staying at Claire's so didn't want to fall to temptation so had something before we left. I had mentioned to Hague that I'd seen a really cute mug in Asda whilst I was getting the flowers and he questioned why I hadn't treated myself - so in the name of a Mother's Day present from the animals, he made me stop and get it :) 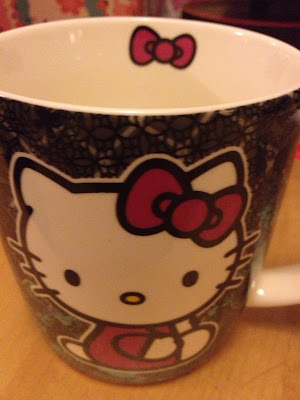 It's going to make my tea taste lovely :) So purchases made we headed to my Sister's where we spent a rather pleasant few hours catching up whilst Gary cooked the dinner. Everyone seemed in a lovely mood, and as always my Mum was more than complimentary over my weight loss - panic mode is now starting between her and Clairey (my Sister) as the title for the biggest of us will soon be up for grabs between the two of them ;)

When dinner was ready, we headed home. Hague had left his pulled pork in the slow cooker - not a euphemism - and didn't want it to be buggered, and he had expected it to take 8 hours, however, after 5 it was decidedly done and so dinner was hastly prepared to go along with it. Mine without the pork obviously! 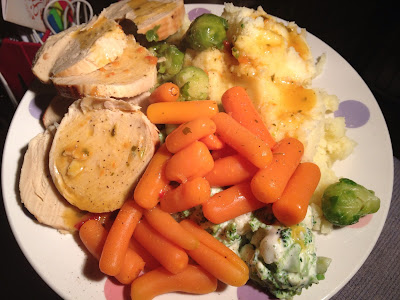 Quorn roast with mash, carrots, brussels, gravy and cauliflower and broccoli cheese. Yum, just yum :) Syn free as the gravy was a stock pot, and the LowLow on the veggies was my HeA. Hague had the same, but with some pulled pork. As I'd been tired anyway, I headed up for a nap after such a huge dinner and was awoken by Hague after a couple of hours much refreshed and so decided to get started on my wardrobe sort out. Our group is having a clothes swap next weekend and it's the perfect excuse to have a long overdue clear out - I just hope that there are some people who can make use of my old clothes. I was trying everything on as I went through my wardrobe, and I'll be honest, with a lot of it I was pretty sure it still wouldn't fit. However, I have currently only found 3 things which don't quite fit yet, and have found many items that I was shocked I did fit into, including a sz 18 River Island top and a pair of sz20 George jeans. It was an amazing feeling, and really boosted my mood. I can't wait to do the rest now :)

Obviously after all that activity I was peckish again, but as Hague ate first I'll share his "diet" tea :) 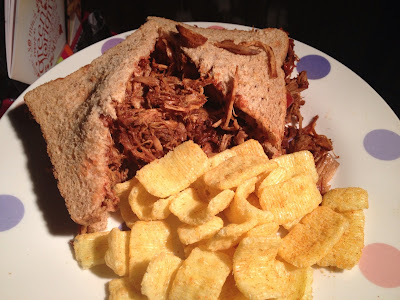 A giant pulled pork sandwich, with Crunchy Curls, he was rather proud of it, and in case you want to try the pulled pork, here's how you do it;

As you can see, it's another low effort special :) Hague reckons that next time it needs some tomato puree added in, and a bit more mustard, powdered rather than made up, but give it a go!

Obviously I didn't have left over pulled pork, but I did have leftover Quorn roast and so that was my tea. 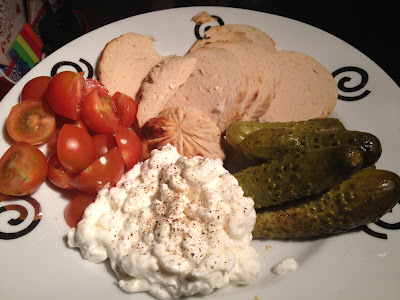 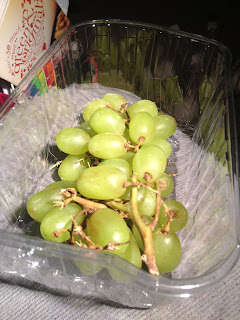 I'e also been munching on some grapes whilst I've been tapping away on today's blog :) I also got an email from Slimming World asking me to complete the online application form for the Greatest Loser competition - a very exciting moment, I don't think I have a hope in hell of winning it (this year) as I'm not at target, but I'll certainly be putting my all into the form, you never know right? So all in all it's been quite a bloody marvellous day, even with the animals dropping the ball on Mother's Day :)

I hope all you Mother's out there have been spoilt rotten, and have totally enjoyed your day, whether you decided to stay on plan, or flex it for the day. If you flexed, just keep it in perspective - it's once a year, it's one day out of the week, and even if you gain this week, sticking to plan from now on in will get rid of the gain, and anyway, I'm sure you enjoyed every mouthful - no regrets - life is for living! 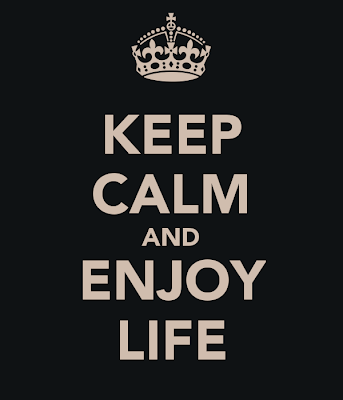