Attack Of The Munchies 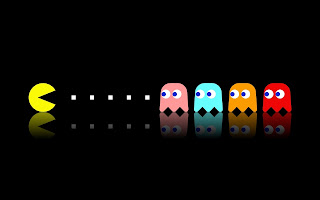 I don't know what came over me yesterday, it was eat, eat, eat all day long! I'm not sure if it was a sort of backlash against my gain, or just one of those hungry days, but let's just say it was a good job I had to go to bed early!

So shall we begin? As always I woke up whinging and groaning at the alarm clock and got myself to work half asleep. I didn't make the mistake of not eating today though and grabbed myself a banana along with my cuppa during my first break. 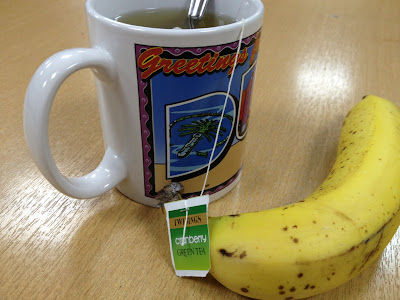 Luckily work continued on in the same vein as yesterday, with the machines behaving themselves, and so I had lots of time to chat away to TOK as she enjoyed her birthday. I'm getting the first breaks this week, which means breakfast comes along nice and early - which is good as I'm always hungry by the time it comes around and I had a lovely big meal waiting for me. 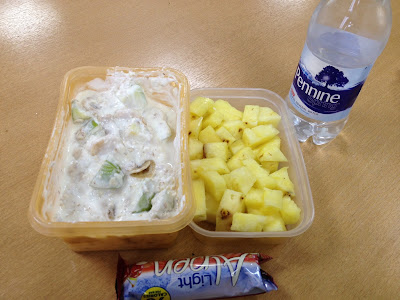 Good old muesli and yogurt, although this marks the end of my box of simply fruity muesli and from now on it's Jordan's boring stupid muesli for me :( Anyway, that'll be Friday, and I'm talking about Wednesday. I must stop distracting myself! Along with pineapple and an Alpen light it was a good filling breakfast. 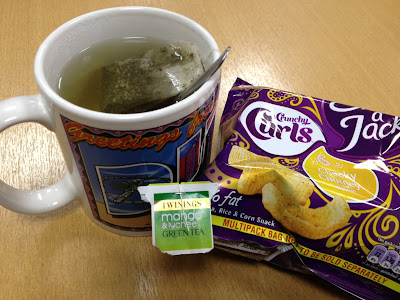 I should have known what kind of day it was going to be when even after that lovely breakfast I was hungry again on my final break and put away a packet of Crunchy Curls! Even after that my mind was already turning to what to have for lunch when I got in! First things first though, and as soon as work was done and I was home it was time for a cuppa :) 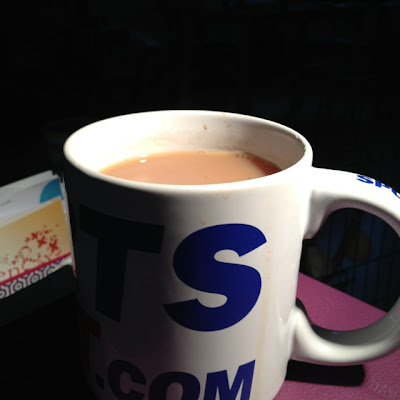 That was swiftly followed by a couple of bowls of my brocolli, spinach and blue cheese soup, so easy it's untrue, frozen onion and brocolli, stock, garlic, thyme, and then once that lot has cooked away for a while, lob in some fresh spinach and laughing cow light blue cheese triangles :) Easy peasy! 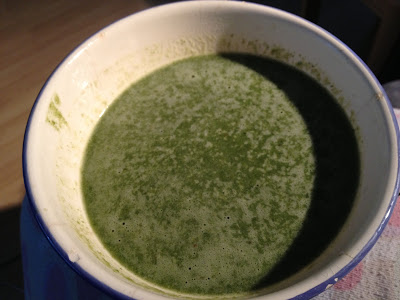 ﻿It was a bit heavy on the stock, so a bit runny, but it still tasted lovely! Obviously not lovely enough to stop me having yet another cuppa and have my mind turning to dinner within a couple of hours. I know...a massively hungry day...Dinner was chilli, and in the name of budgeting frantically, Hague had saved the peelings from yesterdays potatoes and we had those with the chilli. They're delicious, and potato skins made a nice change from wedges! 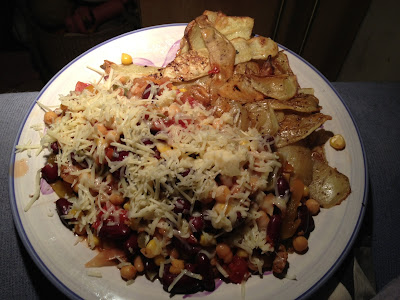 Might as well get two meals from the same potatoes eh? The veggie chilli had turned out a bit runny, and so we kept the sauce for me to have as soup another day. Penny pinching ahoy in our house at the moment :) I'm sure you won't be suprised to hear that I now wanted dessert. My syns were rapidly dwindling and so I just threw a hot chocolate sachet (a 40cal Cadbury's caramel one) into a tub of Quark with some sweetener. 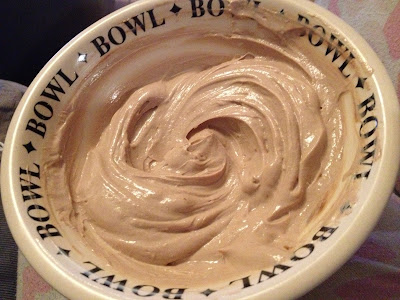 I think if it had been prepared earlier, it would have been more like an Angel Delight or mousse, but as I shoved it down straight away, it still tasted pretty much like Quark and hot chocolate....another lesson learnt!

Even that wasn't enough and before bed, I had the last of my syns in the shape of 5 Mikado and a cup of my camomile and maple tea in a desperate attempt to quell my sweet tooth cravings! 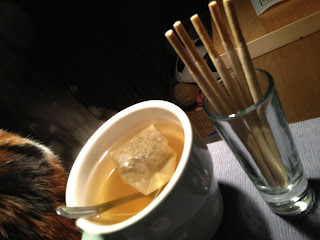 Guest appearance there by Jadey's rear end :)With Mikado munched and tea drunk, it was time to head to bed to try and get a decent night's kip before another 12 hour shift :(

It's not that often I use up all my syns, but yesterday I had a massive sweet tooth that could not be curbed, which is quite unlike me. However, I stayed within my syns, and tonight I just won't have the opportunity to munch the night away as it's a case of home, eat, bath, bed on a 12 hour shift.....still, only 25½ hours until the weekend *sob*