Once again, I'm playing catch-up, but hopefully this is the last time for a while. My Friday was pretty unexciting though, bloody frustrating, but unexciting! Getting up was the first challenge, one that's always worse after a 12 hour shift, but for some reason I woke up at 3pm and stayed up! This did mean I got to spend some time with Hague (yay), and got some time before we had to go and pick up the shopping, but then the time seemed to speed up, hurtling towards the time I needed to get ready for work, and so dinner had to be sorted. Luckily, I have me a rather amazing Hague, and when I said I fancied a roast dinner, he made one for me :) 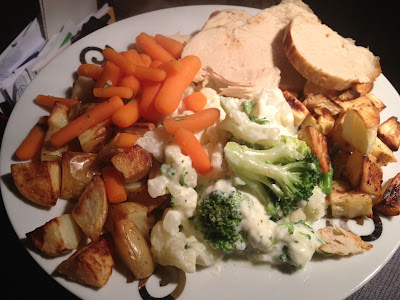 How gorgeous does that look? Not a syn to be seen either, although my HeA is nestling in there in the form of my broccoli and cauliflower cheese. No better way to ready yourself for a shift that will mainly consist of cleaning.....joy..... 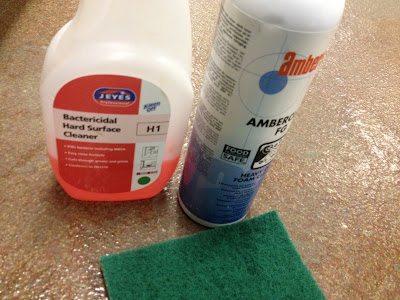 Yes, this is how I spent my Friday night...scouring, scrubbing and generally getting myself filthy and machines clean. Jealous? Chances were that we could get away earlier (as once everything is clean, we can head off home) but I've been stung with not taking enough food before, and so took the full compliment with me anyway, and started off the breaks with something of a variation. 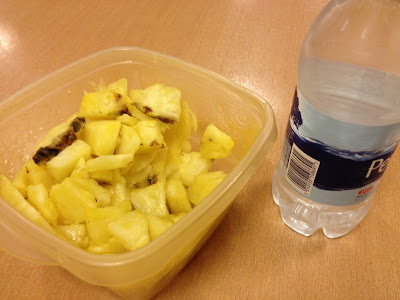 I'd not had pineapple for ages, and seeing as I bought a pineapple deskinner type thing, I thought it was about time I tried it! After my last pineapple being bland and downright disappointing, it was a pleasant surprise to have a lovely, fresh sweet pineapple again. With much cleaning under my belt it was time for my main break. 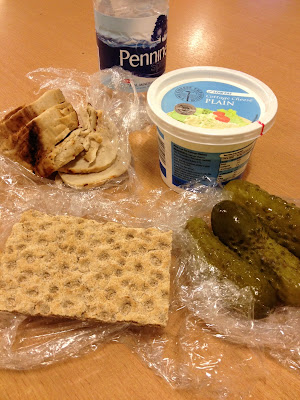 Back to the Ryvita today, along with the remaining Quorn roast, some gherkins and cottage cheese. Maybe an odd combination, but it worked for me, especially when followed up with my new Favourite Thing In The World Ever. 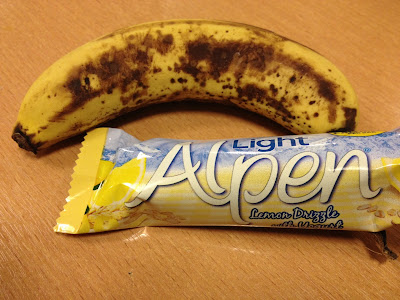 Omnomnom. I am loving the lemony Alpen Lights! It wasn't too much later that the cleaning started to wind down, and we started to get ready for the off....now if you follow me on Twitter (@theminxymissk) and are a total insomniac, you'll have noticed I got rather frustrated with just how long we were stuck there waiting to go home - but eventually we go the all clear, and  I headed off to bed, covering the distance in a close to record time of 18 minutes :)

With me crawling into bed at about 4.20am, it wasn't really that wonderful to be woken up just before 9am with Hague's alarm as he had to head up to Barnsley to see his boys. Sometimes I'll head back to bed, but today I figured that I'd stay awake, so with Hague deposited at the station I plumped for a lovely hot bath, complete with a cuppa and my Kindle. Perhaps not the wisest thing to do when you're already tired, but I never claimed to be conventional now did I? :) For once, I was heading out rather than just vegging on the sofa, but needed to get some breakfast inside me first. 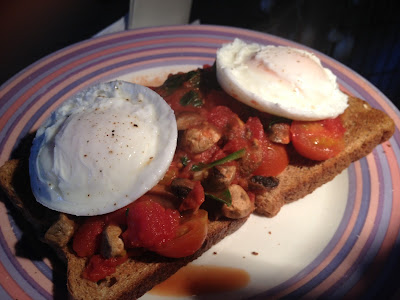 A couple of poached eggs, plus tomatoes, mushrooms and spinach perched atop of my HeB wholemeal bread, perfect Saturday morning  breakfast, however, once it was eaten there was no plonking myself on the sofa for the duration, I had to get up and get out!

Our local library was playing host to the ladies from Historical Sauces, who were demonstrating forties style hair and make up, and I wanted to go along so I could try to re-create those wonderful sleek, rolled styles for myself. Luckily, I managed to get my hair styled for me, as well as being shown how to do it, and I'm determined to master the art! 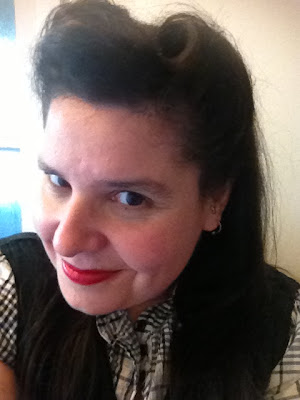 I love the look, including the lippy, and I think I might have to treat myself to one of their hair and make-up work shops at some point! I also managed to finally get my fringe trimmed and so now I can finally see once more!

With just myself to feed tonight, I thought I'd finally give a veggie korma a go, seeing as I bought the coconut yogurt ages ago! 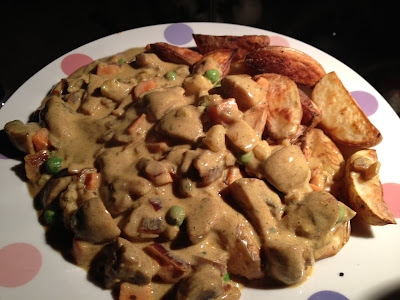 Looks pretty good doesn't it? It tastes rather lovely too, although it took some work to find out the syns! I knew the yogurt was 2.5 syns, and of course the veggies were free, but the Schwartz korma spice blend remained an enigma. They are not just purely spices, in the ingredients list was sugar and coconut milk, and so I knew there would be syns somewhere, but it wasn't online, and there was no nutritional value on the website either (grrrrrr). In the end I found a calorie value of 25 calories per 12g. Call me mad, call me dedicated, but I then weighed out 12g to see if I'd used that much and it was a lot more than I used, but I'll still call the meal 4 syns to allow 1.5 for the spices :)

So now I've bored you to tears with the tale of syn searching, here's how to actually make the curry :)

I chopped the onion, and mixed in some of the spices (12g is quite a lot, so about a quarter of this) and some fry light, when it was softened I added the rest of the veg and let it fry for a little while with some more spice. When the veg was cooked I put in the stock and let it boil for a while to thicken up the stock and added some more spices. After a few minutes, when the stock had reduced I added about 2 spoonfuls of natural yogurt and the whole pot of coconut yogurt. I then dolloped it up on top of some wedges. It was surprisingly nice, although it was rather creamy/yogurty, so I think next time I'll just add the coconut yogurt and leave out the natural one. For 4 syns though it was a rather good fakeaway!

After an hour or so spent constructively watching the Comic Relief Bake Off my sweet tooth, unsurprisingly reared it's head and I decided to treat myself to a SW version of a lemon meringue pie - sort of. 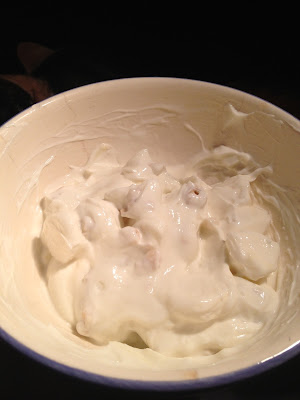 It might not look much, but it tasted gorgeous! I mixed up half a tub of Quark and a spoonful or so of natural yogurt just to give it a more creamy texture, then added some vanilla extract and sweetener to taste. Then I crumbled in a lemon Alpen Light and stirred in a teaspoon of lemon curd and 10 mini meringues :) Due to the fact I had my HeB for breakfast I had to syn the Alpen Light, but it was worth every one of the 5 syns inside that bowl!

I know I've only had two meals today, but lack of sleep is telling now. So I'm going to get myself a nice milky hot chocolate with the rest of my HeA (I've had lots of tea today) and settle down in bed. I might even take a pet or two (or just JadeyPuss) up with me :) When the Cat (Hague) is away, the mice (Me) shall play after all ;)

And so I'm up to date once more, which is rather a nice feeling! I've also had a rather productive day, which is also a nice feeling :) It's time for bed now though, and so I shall leave you with the varied and mostly useless things I have learnt today;

Very enlightening I'm sure you'll agree, and so I'll leave you with those, and bid you all a good night, and a wonderful evening! xx