*sigh* Bloody animals! I accept the fact that we lean more into the realm of menagerie than just pets, but with this lot of faulty and second-hand fluffy thingums we seem to have more than our fair share of panics! Yesterday is was Flumpy's turn to cause a stir. To be fair, she's normally one of the lesser problematic of the bunch, but when I'd decided to have a huge lie in, and was then running only just on time to pick up Hague from the station the last thing I needed was to discover that one of our dinosaurs cats was missing. Cue rather high stress levels as I scoured the house calling out her name to absolutely no response. As she's taken to sleeping in the cupboard under the stairs I was petrified that she'd go trapped in there, but no sign :( After about 10 minutes of rushing around looking everywhere I heard a sound like litter from a litter box being moved and lo and behold there she was - asleep in her litter tray. Of course....I had no time to investigate further as I was late to pick up Hague and so I departed swiftly leaving her where she was.

Breakfast was very much on the go, as after Hague was collected we were heading to an open day at a local holiday camp as part of our long quest to find gainful employment for him :) 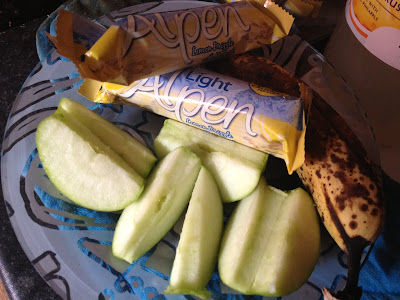 Two lemon Alpen lights, an apple and banana. swiftly munched on whilst in the car! After spending a little time with Hague at the job fair it was time to head to work and so off I went. It wasn't long before I got a text asking what was up with Flump....she was very lethargic and shaking, and very obviously not right :( Never good news to hear, and definitely not when the only person at home can't actually drive and your vets is 10 miles from home! So I had to leave work to get our poorly pussy to the vets. (I had managed to squeeze a break in prior to the bad news though - and had a packet of Crunchy Curls and a clementine)

After a thorough little examination the vet told us she had a nasty chest infection which had caused her temperature to get really high. One of the problems with a high temperature in a cat is that it can start to cause problems in their internal organs and so a blood test was in order too. Luckily all her insides were fine - and after an injection to get her temperature down, and some anti-biotics for her infection we finally got home after 7pm, too late to head back to work - but definitely time for dinner as I'd had a snack at work but nothing more. Neither of us were in a mood to cook anything after being so worried about Flumpy and so  I threw together a Greek inspired pasta dish, with Quorn lamb strips, pasta, tinned tomatoes, onions, spinach mushrooms and some oregano. Hague had his with cheddar, I had Feta. 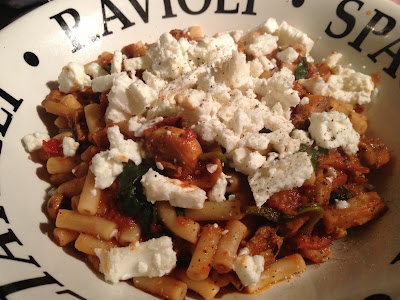 I followed it up with some pineapple as we kept an eye on our poor flumped Flumpy - she wasn't even interested in the food! 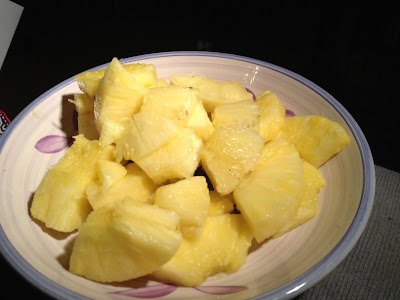 As is usual when working shifts, my stomach works on the clock, and so by about 10.30 I was hungry again and so I did myself a jacket spud with some salad. 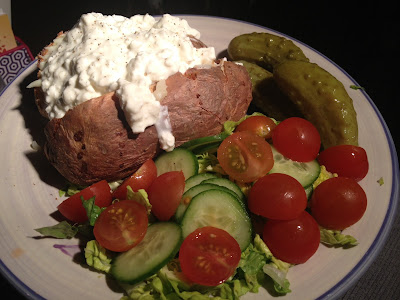 There are 2 LC extra light triangles under that cottage cheese too, not too heavy and rather nice, I followed it up with some yogurt. Stupid Asda didn't have any of my lovely crumble yogurts and had substituted them with some boring fruity ones. At least they were syn free eh? 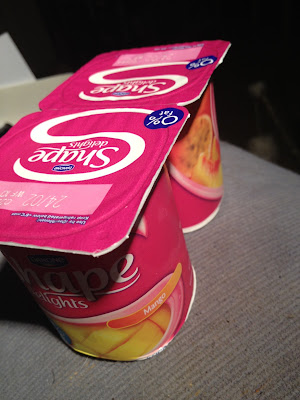 And so endeth Monday. With an earlier night that normal on a late shift due to the stress of worrying about a cat.....us animal lovers are such soppy doughnuts some times!

And so onto today - which started with a check on the Flumpy One, who seemed a wee bit perkier but still not herself at all, luckily she had Hague to look after her all day :) At least I had time for a proper breakfast before heading out today. 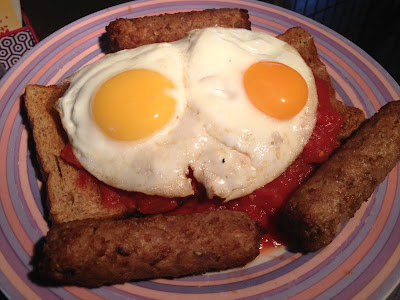 Although breakfast did contain the last of the chopped tomatoes in the house. I'm not quite sure how that happened, as we always have about a zillion tins, but nope, we have run out. This may have had something to do with my batch baking on Sunday though, as I think I used about 8 tins hehe!

Anyway, chopped tomato issues aside, with breakfast eaten it was time to head to work. For the full eight hours. Pets allowing of course ;)

On my first break I was too busy chatting to have anything to eat, and I just had a pineapple and grapefruit green tea, I'd not had one for ages and had forgotten just how nice they were :) I also had rather a wonderful non-scale victory today. For a long time I've had to get my trousers specially ordered at work, and have even resorted to ordering them myself when the sizes got too embarrassing. My old trousers, however, have got rather too big now, they're bundled up around my waist and can be taken off without being undone, so it was time to order some more. I ordered two sizes, a 46" waist and a 48" waist. I thought I was being a bit optimistic, but tried on the 46" ones first and they were too big :) So that's a pair of trousers 8" smaller than the ones I'm wearing now....and they're too big! I've ordered some 44" ones now, which I'll soon be out of as well! Exciting times.

Onto dinner time, and my batch baking came to the rescue again, as it was minestrone soup! 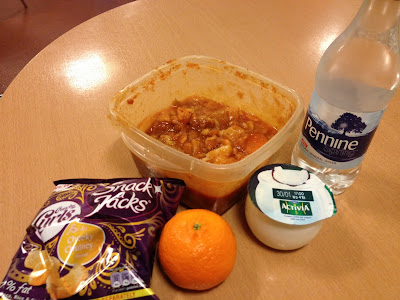 I had some Crunchy Curls again too, along with an Activia and a clementine. The soup was lovely, and possibly nicer tasting than it was originally! Whilst I was eating my dinner I was partaking in my SW group from afar, as I was texting 3 of the ladies, plus Hague to see how everyone was getting on! Hague got his next award, his 1 stone, and with his loss of 3.5lbs he's now lost 16.5lbs in 4 weeks, which is phenomenal! and means he's now almost a quarter of the way to target already!

Work was zipping past quite nicely today, perhaps it's all down to the fact that we're off on Friday? Who knows? I know that it meant my last break was actually quite late on in the shift, but didn't feel like it, and once my apple magic muffins and banana were eaten I had only just over an hour left :) 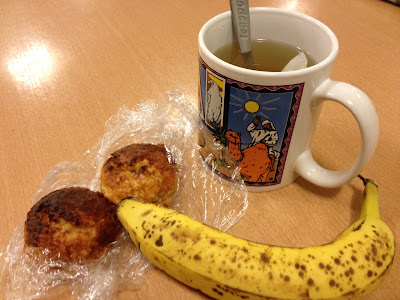 The magic muffins have definitely improved since they were cooked too, I'll be making those again :)

I got rather excited at work when it started to snow, but by the time I left it was all gone :( I suppose it's a good thing really as we have a drive to London on Friday, but I'm already missing the prettyness of the snow! So homeward bound, and practically waiting for me was a delicious dinner - one that I had described to a friend and he questioned whether I could have that on my diet...well Shane....here's my dinner, and it's all on plan ;) 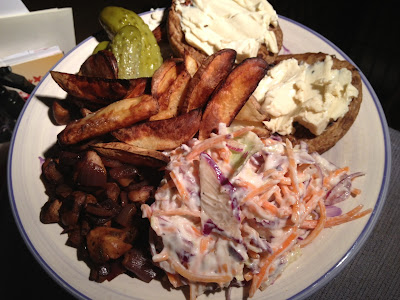 2 Quorn red onion burgers, covered with 4 LC blue cheese light triangles, with BBQ mushrooms and onions, some gherkins and coleslaw :) Absolutely bloody handsome, and the only syns were in the coleslaw. Fabulous. Dessert today came in the form of a banana and two cups of tea. After me pouring one cup all over the floor. Thank goodness for laminate floors ;)

So, yet again, I'm up to date! Flumpy is much perkier now, and has been cleaning herself and eating. She also managed to gouge out decent sized chunks of Hague's skin whilst he gave her one of her tablets! I'm off to weigh in tomorrow morning due to my shifts, and I just need 1/2lb to get my next award, so fingers crossed everybody! Especially as I'm expecting my biggest ever gain next week after my birthday weekend ;)