I had a big fat fail today. I was due to go back to work, but I woke up absolutely shattered and so had to call in sick once again. Despite my stomach now being back to normal, it's obviously just taking a wee bit of time to get myself back to normal - I'm sure I'll be fine for my Monday night shift though (here's hoping).

With that disappointment and upset out of the way, a lovely Hague sorted me out breakfast. I was so hungry I ate half of it before I remembered that for the last 6 months I've been taking pictures of my food ;) 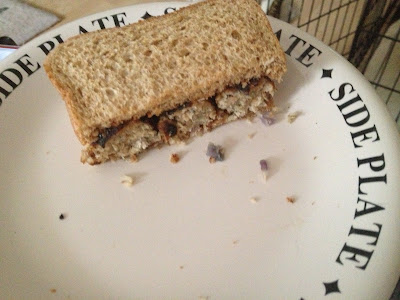 A LM rosemary and red onion sausage sandwich with a cheeky tbsp of ketchup. Very nice, but not the most filling of breakfasts, and no superfree, so I followed it up with a rather large helping of fruit. 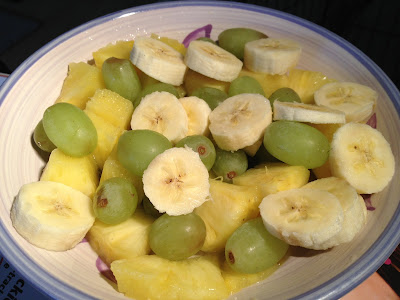 Nothing too exotic today, just grapes, banana and pineapple, but enough to keep me going until well into the afternoon. Due to our Top Cashback Amazon voucher and the Dorothy Perkins sale (yes Dotty P's - I'm just that skinny now) we had lots and lots of deliveries today, and Asda came as well, so it wasn't the most relaxing of afternoons, but we do have lots of goodies now! Including my "hedonistic" (according to Hague) purchase of some new coasters for the living room. I know. He does have a point :) I was most pleased with my Dorothy Perkins goodies though, as I'd ordered some size 20 skirts with slight trepidation, but they fitted beautifully, and seeing as both of them were less than £16, I'd call that a bargain. Probably the most awesome purchase was my new hat though. Behold The Hat of Awesome.... 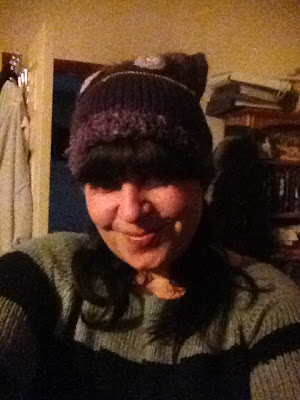 It's not the best picture, and it also highlights that I need to get my butt to see my hairdresser ASAP to trim my fringe, but you get the idea :)

With the flurry of deliveries down, and my energy levels dropping fast, I decided it must be time to eat again and so I attempted a Quorn satay dish. 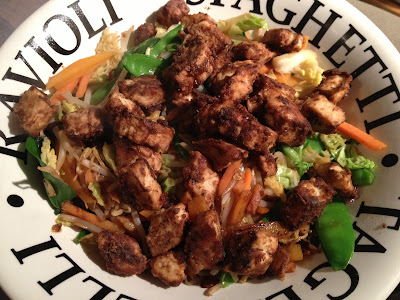 Now, as you can see, the satay on the Quorn chunks ended up rather thick - but it tasted okay. Just okay though, and I think the recipe needs a tweak. TOK* sent me a recipe, and it mentioned stock, so I think I'll try that next time, anyway, for my lunch this is what I did.

I basically stirred the lot together and then mixed it into the Quorn chunks when they were cooked through. I'd cooked the Quorn in quite a lot of the Frylight wok spray and that was quite a prominent taste, however the taste of the satay was good, it just wasn't quite runny enough. I think next time I'll use a lot more stock and melt the peanut butter into it - but it was tasty, and served up on lots of stir fry veggies (a pack from Asda) it was filling too.

After eating, and causing such arguments on a FB page that my thread was deleted (oh the controversy), I was fading fast and so heading up for a much needed nap.

With my batteries recharged, I spent the evening having fabulous chats with some of my favourite SW Twitter ladies and texting my new BFF, TOK ;) With the evening getting on though I needed to have something else to eat, but really didn't have the inclination to do anything too involved and so I came up with this plate of noms. 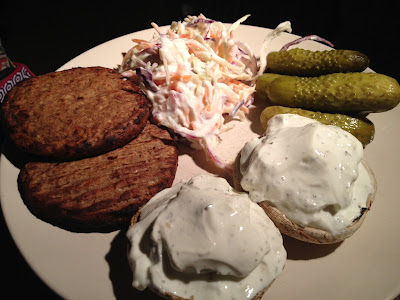 Garlic stuffed mushrooms (Quark, mixed herbs and garlic), Quorn sweet red onion burgers, homemade coleslaw (2 tbsp of extra light mayo, yogurt, lemon juice, pepper and coleslaw mix) and some gherkins. 10 minutes to prep and cook, marvellous. After dinner, I needed a sweet fix, and found it in the shape of some Daim Mikado's, washed down with the final one of my many cups of tea today. 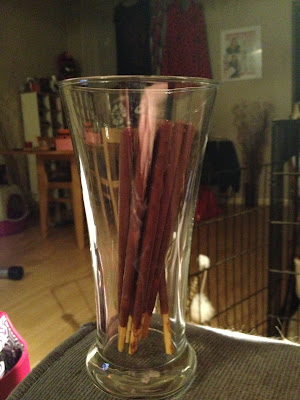 It's been a very odd day really, starting off with me being desperately upset that I was letting work down again, and then the highs of my sale purchases fitting. Then the social network roller coaster of causing rows on a FB page (inadvertently of course), and then connecting with some truly lovely ladies on Twitter. What a day :)

Oh, and I've also set up a Tumblr page, not sure what I'm going to put on it yet, but hell, it's a social network, it's there, I'll pimp the ol' blog on there too ;) Feel free to say hi if you're there, and I can give you a follow too. x