Today has been much better. The stomach bug is most definitely behind me and we have been having a bit of a de-clutter, which is a rarity in this house, but already the living room looks rather lovely, and we're going to set to it in earnest when I'm off next week. However, as exciting as tidying is.... I shall get on with my food for the day :)

My day started pretty late, as I didn't get to sleep until around 7am, and so woke up at around 2.30, feeling peckish but not sure what to have, and so a cuppa it was whilst I pondered on breakfast (yes, breakfast, just because my timings are a wee bit out it's still the first meal of the day hehe). In the end, I let myself be inspired by the lovely Other Karen and had Dorset Cereals simply fruity muesli with yogurt and fruit. 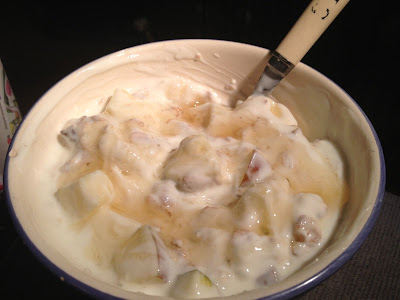 There's an apple and a banana in there too - and I came over all decadent and treated myself to a teaspoonful of honey too. Yum :) Now, whilst I was letting that have a little soak (not in the bath, letting the muesli and yogurt soak in together), I put together my lunch. I fancied something a bit different and so dug out my All In One cookbook and tried my hand (again) at the sweet vegetable risotto. This time I made it with butternut squash rather than sweet potato though - and may I present the skinflint version of a book stand that we tend to use in Chez Mitchell/Hague... 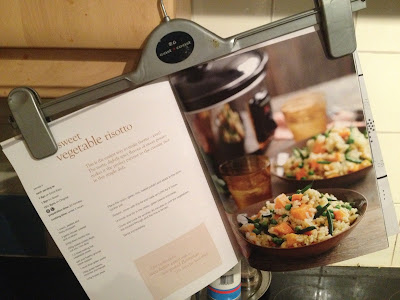 It does the job :) Anyway, the recipe itself involves green beans, frozen peas and pesto, which I don't like, didn't want, and isn't veggie, respectively, and so I sort of just used the recipe as a guide.

I chopped up the butternut squash (with the skin on), measured out the rice, poured in some frozen diced onions, frozen broccoli and squished the garlic and put them all in the slow cooker with the stock and left it for 2 hours. It said in the recipe to cook it for 2 hours on low, but after visiting it about an hour into the time and seeing it all still looking a lot like vegetables floating in a lot of stock I panicked and turned it up to high :) When the 2 hours were up it was looking a lot more like risotto and I put in the spinach and cherry tomatoes for the last half hour and voila! Vegetable risotto! 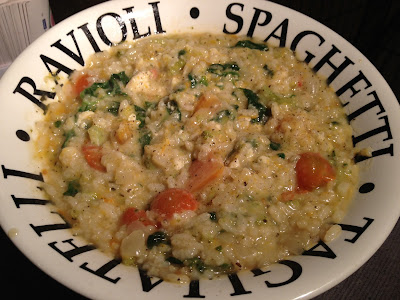 I stirred in 4 of the Laughing Cow blue cheese triangles too, so it was rather nice. However, I think it's still a work in progress. The broccoli practically disintegrated and the butternut squash had absorbed a lot of the other flavours rather than standing out, so next time I think I'll put the broccoli in with the other veg with just half an hour left, and will roast the butternut squash on it's own and put it in at the same time. Don't be put off though, it's a pretty low effort dish, filling and tasty and makes two large portions.

After quite a savoury meal, I needed something sweet and decided to try yet another fruit from my SotW basket. I have tried grapefruit before, but not the ruby one, and not for years. My memories are of diets from many years past, which my Mum followed and I attempted to try and the hideous taste of the grapefruit. By mixing it with pineapple I think I was hoping for something resembling Lilt - it didn't. Not saying it wasn't nice and refreshing though, but I think if I have grapefruit again, it might need some sweetener to help it along! 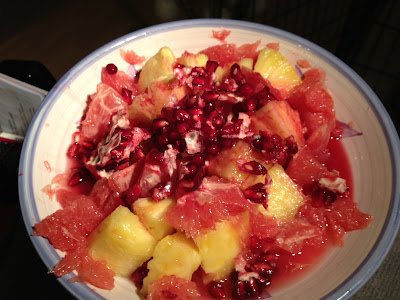 After all those noms, and much facebooking - honestly, sometimes I don't know why I go onto some of the Slimming World support groups, in amongst the hundreds of requests for syn values, so many of the posts have so much bad advice on them that I just want to scream - I decided that a bath was the way forward. After Christmas I treated myself to some new bubble bath - and I can highly recommend it, although it can tend to make me hungry :) 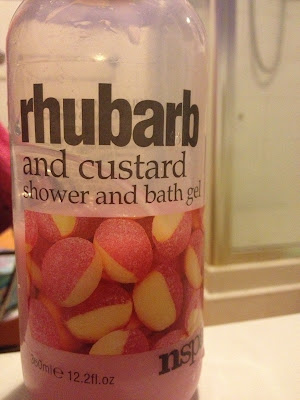 Oh it smells goooooooooooood. Rhubarb and custard sweets are one of my favourite things ever, and as I can't really eat them, I'll settle for smelling like them :) The bath was a bit of a fail all round though, as I left it unsupervised whilst I ran it - bad idea. Left to it's own devices it ended up too cold, and then when I let some water out to put more hot in, there was no hot left *sigh* Is there anything worse than a disappointing bath? I still managed to stay in there for over an hour, merrily tweeting away though :)

When I got out, it was midnight, but I was hungry. For normal people, midnight is way too late to eat, but I'm not really normal - and my body clock doesn't work like most people's. Plus I don't have to be at work until 2pm tomorrow, and so it's all good :) Due to Slimming World being so bloody marvellous I could throw myself together a guilt free tea. 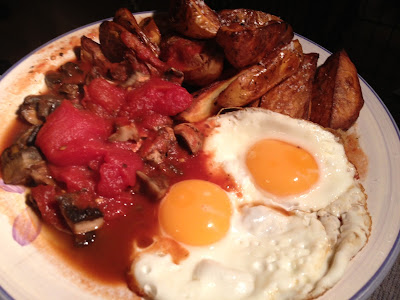 Although eating so late means you might be tired, and you might end up pouring the juice from the mushrooms and tomatoes all over your laptop and end up with a screen rotated 90 degrees and have to faff around for ages to sort it. Just a warning.

So now it's stupidly late, and soon I'll be heading off to bed, but I just need to get a little sweet fix in first :) 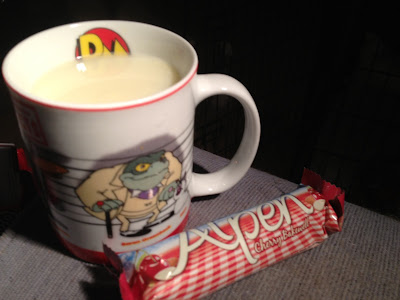 So with hot chocolate drunk, and Alpen light eaten - it's time to head to bed, and back to work tomorrow. Normality for a single day before the weekend beckons :)