Ah Saturday, a day for football, relaxing and doing whatever you want. I love Saturday :) Mine didn't start until pretty late though, as my eyes only reluctantly opened at about 1.30, and I really didn't want to get out of bed as it was SO cold, so I stayed snuggled up for about 45 minutes as I caught up with all the online happenings before hunger dragged me out of the warm cosy nest I'd made for myself (Hague had already been up for hours).

First things first, and I made myself a huge cuppa. Whilst that was brewing I sorted out my porridge oats for some magic pancakes for breakfast. I only let them soak for as long as it took me to drink my tea and then got started on cooking them. Now, I realise that over the last few days I've had a lot of new people reading this blog, and so I'll give you the recipe again, as these are awesome for breakfast :) 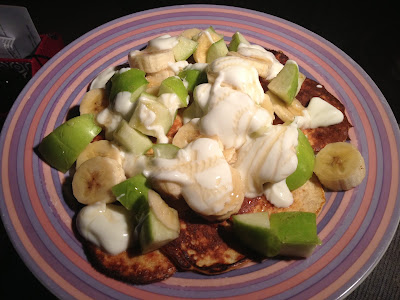 They really are easy, and so filling!

You mix together the yogurt and the oats and leave them to soak for a little while, some people leave them overnight, but as I said, I only left mine for as long as it took me to drink my tea and that was plenty. Beat the eggs and then stir the oaty yogurt mix in. Put a pan on a low heat and spray with frylight, when the pan is warm pour the mixture in into small pancake portions, then leave them alone. They will be ready to turn when you can easily turn them over, which seems to take about 10 minutes or so, patience is key :) As you can see, I had mine with apple, banana and some fat free yogurt and I topped it with a teaspoon of honey. Gorgeous breakfast, and one I really should eat more!

I whiled away the afternoon watching Soccer Saturday and discussing many Slimming World thingums on both Facebook and Twitter including the nommyness of Mikado's and which muesli is best (Dorset Cereals simply fruity of course).

As it was nigh on 4 o'clock by the time I actually ate, I didn't have anything else before we headed out for a curry with a friend. I'd decided to have a genuine flexi day and wavered between having 40 and 50 syns, but settled on 40 and was determined to stick to that limit, but still enjoy myself - I went prepared - with the SW website page loaded on my phone at the vegetarian curry page so I could make sure I didn't go mad. In the end we skipped starters, and so I treated myself to half a naan bread - even after tweeting my slogan of the day, Say No To Naan's. 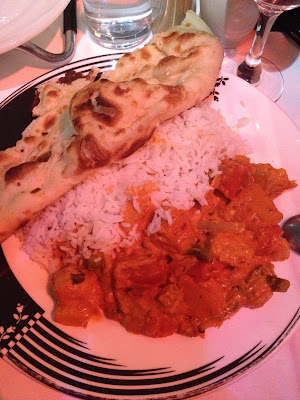 I had boiled rice though, as you can see, and went for a vegetable Malayan, which is similar to a Korma, and so I synned it as a Korma, so my meal was 25 syns, but delicious! I also had a glass of wine, which sounds odd, but if I drink spirits I would probably have had more than 2, whereas the glass of wine lasted me the whole meal for 6 syns, so the total "spent" at the restaurant was 31 syns. We then went onto a local pub and met up with a couple more friends - having a very enjoyable few hours, and I had 3 more drinks, this time 25ml measures of Jack Daniels to take me up to that magical number of 40 syns. Go me. However, we did get given free shots of Sex on the Beach with our drinks, but as it was just 25ml of a mixed drink, I'm guessing it would be huge amounts, so I counted it as 2. So along with my breakfast syns I had 43.5, which I'm pretty pleased about it!

After a rather lovely evening, we decided to head home before we took on board any more alcohol flavoured syns, and before it got any colder! It was FREEZING out there, and it was nice to get home in the warm! As we're both night owls, rather than winding down for bed, we decided that watching Avengers Assemble was the sensible thing to do, and me being a hungry so and so decided that a snack was also a sensible thing to have :) 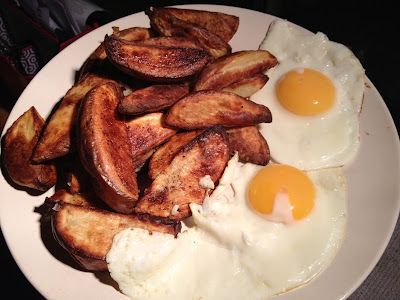 No superfree I'm afraid, but I'll be honest, the eggs were really only there for their dunkey-ness as I had no syns left for mayo or ketchup, but at least I'll now go to bed comfortably satisfied rather than hungry :)

I'm not going to feel bad for popping slightly over my (self-set) 40 syn flexi day allowance, I'm not going to feel bad for having a flexi day in the first place. I've had a lovely evening, and a flexi day is a wonderful tool for days such as these where it would have hampered my enjoyment of the evening to have tried to stay within my 15 syns. As you can see, I stick 100% to plan for a huge majority of the time - but I see this as a healthy eating way of life, not a diet, and life is precious, it's to be enjoyed and treasured and not something to let pass you by. I've done enough of that in the past, and now I'm on my journey to a slimmer, healthier me, I'm not going to stop living my life. I'm not pressing pause until I hit target, and going out and having fun with friends is a part of my life I shall not give up, and with Slimming World I don't have to.

One of the first reasons I gave for me losing weight, way back in October last year was to be able to register for bone marrow donation. This was due to the amazing Alice Pyne, who today lost her long battle with cancer. She didn't let her terminal illness get in the way of some fantastic achievements in the final years of her life, and I WILL get to a weight where I can register as a bone marrow donor. I intend to live my life to the fullest, whilst following Slimming World and reaching target. If she can do all the things she did, reaching target should be a walk in the park.