Evening! Or should that be morning as it's after midnight! I can only apologise once again for both not blogging yesterday and the lateness of today's blog. This week seems to have become a huge blur, with not enough hours in the day to do anything! Hence us getting home, eating and then pretty much heading to bed. It's been a bit of a rushed couple of days, with breakfasts on the run, and on the fly dinners - but you're here for the food, so here goes with Thursday.....

We had high expectations for Thursday, big plans for getting up early, getting some things done and having a more relaxed morning....yeah, that didn't even vaguely happen. I barely got out of bed in time to leave for work, and Hague wasn't up much earlier, so breakfast really was a grab and go job! 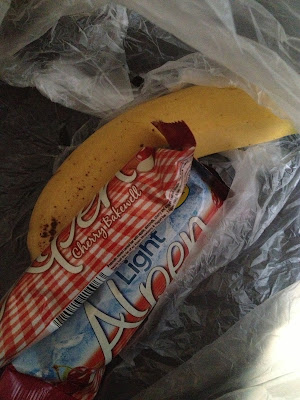 A couple of Alpen Lights and a banana, eaten whilst driving in to work...shocking I know! It doesn't really get much better as the day goes on! At first break I was unsurprisingly hungry again and so I had some French Fries for 4 syns and a packet of Bear yoyo's for 1 ½ syns. 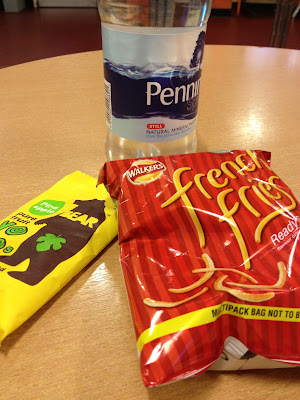 It kept me going until lunch time anyway, and I really do like the yoyo's, it's nice to have something a bit different now and again don't you think? Plus, you can have two packets for a HeB too.

Lunch was a godsend. Leftovers :) 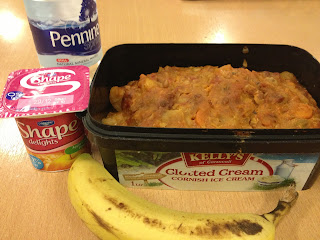 The remains of the sausage casserole, so lots of superfree, plus a banana and a yogurt. It was hugely filling and I could barely move after eating it lol! Work wasn't too bad though, so I managed to get through it. It soon got to home-time though, so with a (very cold) Hague collected we could finally chill out. Well, when I say chill out, we actually had to tidy up the kitchen and then cook some dinner! Hague plumped for noodles, but I fancy something a bit more substantial, and so at 11pm on a Thursday night I made myself a roast dinner. 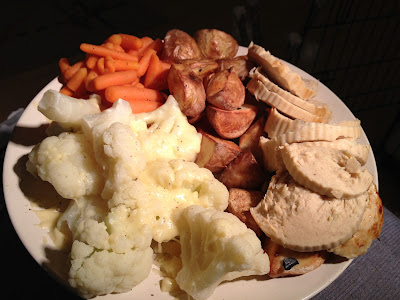 Quorn roast with baby carrots, roast potatoes and cauliflower cheese, it was exactly what I fancied, albeit at a really weird time :) I never claimed to be normal people...... ;)

I managed to forget my Advent chocolate too, terrible! I also managed to resist when at 12.30 Hague decided he needed a take-away. I'm really finding myself craving crap at the moment, especially things like pizza and burgers, but I am managing to resist so far. I have alternatives if it gets that bad anyway.

So onto Friday. Neither of us had much sleep, but we did actually manage to get ourselves up and out as planned. I had to post off a much delayed parcel, and Hague had to hand in a job application, plus we had to pick up the shopping at Asda. I'm rather liking their click and collect service, you order online and then just go and pick it up, even better is the fact that it's free right now - I've even booked a slot on the 23rd of December for the Christmas shop - see, I can be efficient sometimes :)

With all that done, I did have a wee bit more time for breakfast, and managed something cooked. 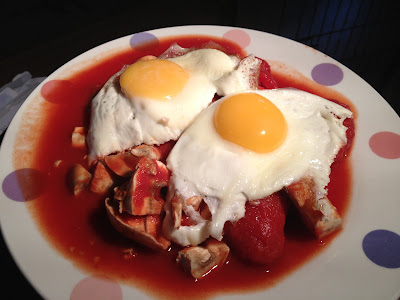 Those are in fact rather a lot of mushrooms under those eggs, and some plum tomatoes, not toast, even thought it looks like it! With all our jobs done, breakfast eaten and lunch sorted it was time to head off to work once again, for the last time this week though - at last!

At first break, I was already hungry again and so had my pineapple. We were low on choices in the fridge again and so I went for a 7Up free. They're just too fizzy for me though, and even though the can is only 250ml I end up throwing most of it away :( Water is definitely more up my street. 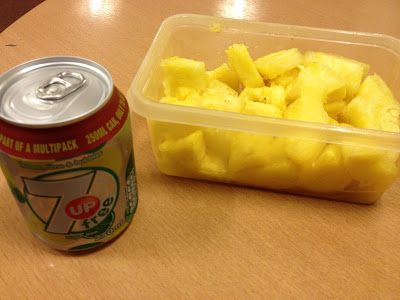 Now, I did take a picture of my lunch, I'm sure I did - however, computer (phone) says no *cough* so you'll just have to trust me that I had 4 ryvitas with my Laughing Cow light blue cheese triangles, cherry tomatoes and some French Fries, I took a yogurt and an Alpen Light bar in with me, but I wasn't feeling too clever and so didn't have them. (I also took a picture of my banana and cuppa on my last break, but that's gone AWOL too) *scratches head*

Anyway, I DO have a photo of dinner, so lets move on shall we? Obviously I couldn't wait to get home tonight, just the thought of being able to totally relax, and the delicious thought of a lie in tomorrow was lifting my mood and making me feel better. On the drive home we decided that comfort food was the order of the day and so it was sausage and mash all round :) 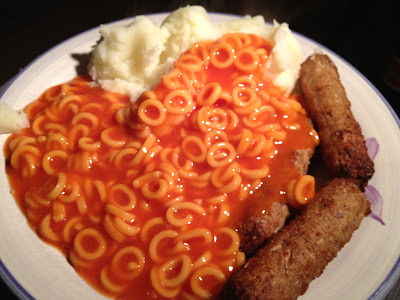 Yes, I know. No superfree. I just really fancied Sploops rather than any veggies. Bad Karen! In my defence I did have fruit in my dessert, so surely that counts for something? 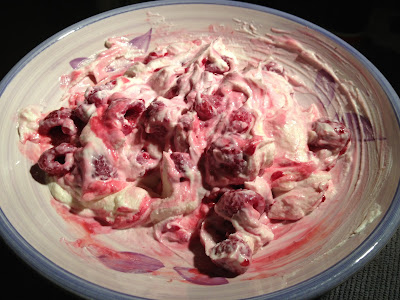 I know what you're thinking, but it's not Eton Mess, it's the yummy Quark/Options combo that I am now officially in love with, with some raspberries mixed in. Perfectly rounded off the meal :) I've now washed it down with two cups of tea, with probably another one to come, so I'll make sure I add the syns.

Something else has happened today I'm sure....oh yeah.....NEW LAPTOP hehe! I'm rather excited, but can you blame me? Lookie...... 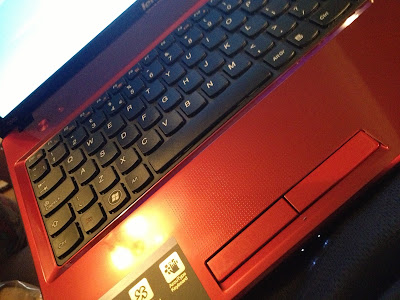 It's all so shiny and pretty! It should be pretty whizzy too as it has 8gb of RAM and a ginormous hard drive :) I even seem to have managed to sort out my iTunes, so it's all good. There is something so marvellous about new technology. I did love my old Acer, but it's coming up for 4 ½ years old, and has had some serious use. After all, as you may have noticed, I'm on t'interwebs A LOT :) Here's hoping this one lasts at least that long! For the next few days the blogs should be more regular before nights again for the first 3 days of next week when it'll go all screwy again! Bear with me :)