After a mega early night last night I really shouldn't have been tired today but I was, I'm sure it's just knowing that I've been up since stupid o'clock that makes me tired, as I had a great night's sleep, but have spent all day yawning! Once again I managed to go to bed without doing myself anything for breakfast, and so spent about 5 minutes, at 5am wandering around the kitchen looking for food, no Alpen Lights, no bananas.....thank goodness for the clementines I picked up yesterday!

So with food packed it was time to head to work, dark and drizzly, but at least the roads were quiet! First break rolled around quite quickly though, so I can't really complain too much. 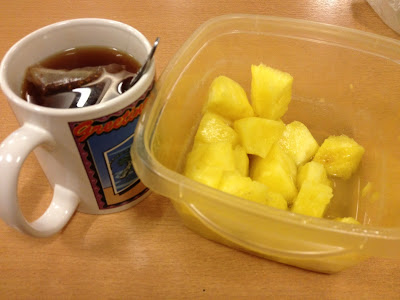 Today's first munch was the last of my pineapple and a cuppa, I really have no clue what I'm taking in tomorrow O_o

Breakfast was from the canteen again, same as the other day, but with some added fruit as well. 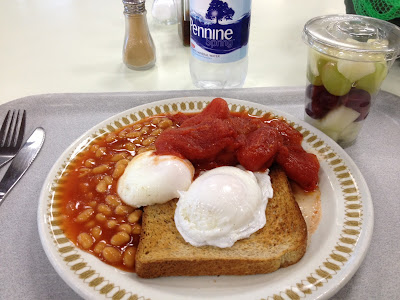 I'm impressed with the poached eggs I must say, perfectly cooked and lovely and runny inside. Lovely :) The little fruit pot had grapes and melon in. I must make an admission here, I maintain that I hate red grapes, but the ones I had in there were lovely - perhaps I should investigate them further :) With breakfast done, it was time to head back to the grindstone, a busy day today, with lots of changeovers to keep us busy. Being so busy, meant that I was hungry again by the time my next break came around. 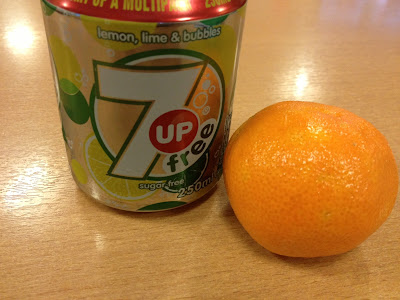 Good old clementines :) I must admit I've been pleasantly surprised with just how sweet and tasty they've been. Sometimes I can be a bit wary of Aldi's fresh veggies, but these have been top notch, I might have to pick up some more before Christmas!

On a 12 hour shift, I get a second half hour break, and luckily Hague had salvaged the sausage casserole from earlier on in the week and frozen it, and so I had that all ready and waiting (thank goodness). 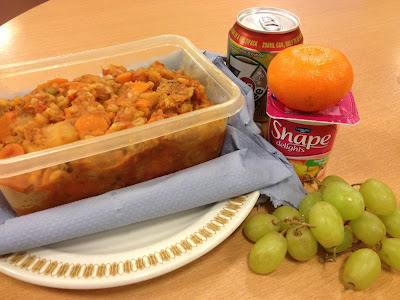 The last of the grapes there, along with another clementine, a shape yogurt and my stew, which needed a plate as the cheap and cheerful Poundland box had split underneath :( It was quite late by the time I had my second meal break, as we'd had a briefing first, so that meant I only had a couple of hours left on shift by the time I'd eaten - all good as far as I'm concerned! I did manage to squeeze another break in that 2 hours though! Obviously no food though, I was stuffed after that lot!

Hague had a a bit of bad news today though, he's no longer needed at Royal Mail, as the work is now easing up :( He was so disappointed as he'd really enjoyed it, but I guess all the cards are sent now, and so it'll be getting back to normal. So although he's finished a couple of days early, that does mean I actually get to see him - which is awesome :) It also means that I came home to dinner ready and waiting, which is also awesome! 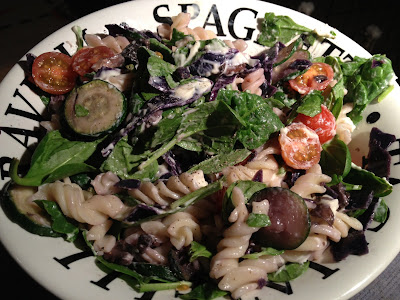 Pasta with tons and tons of veggies! Courgettes, mushrooms, spinach, tomatoes and yet another one of my raffle prizes, some red cabbage all mixed in with pasta and a tub of LowLow. For a quick and simple dinner it was rather tasty, and I enjoyed the red cabbage, not something I'd usually have at all, and it added a lovely bit of crunch and colour. I'm glad I gave it a go :)

Dessert today was just my Advent choccy and a cuppa - it's already getting late for me despite me only being in for a couple of hours.....roll on 2pm tomorrow I say! 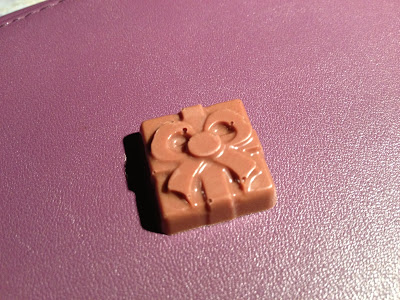 I'm still not bored of my chocolates....I'm such a big kid :) I got excited about today's and told Hague I had my first present lol!

I'm rather proud of myself for actually getting my blog done today - it's been a struggle this week to keep my eyes open long enough to eat, let alone blog. Oh and according to my Facebook page, the general consensus is that I should blog on Christmas Day even though I'll be utterly off plan :)

And finally - the interview seemed to go well today, the only downside seemed to be my absence levels, which to be fair are rather high due to my recent insanity/stress/depression type thing, which is most definitely a lot better now, so hopefully it won't count too much against me :) I should know after Christmas!! So thank you for all the good luck wishes, all very much appreciated.