Where does the time go? I can't believe how close it's now getting to Christmas, and once again I'm woefully under prepared for it. No cards written, only 2 presents in my possession (although most now bought) and no decorations up. On a smaller scale, this weekend seems to have flown by at a ridiculous rate of knots, I have no idea how it's Sunday evening already. Add to that the fact that I'm working next week rather than having my usual week off and I guess it's not a surprise that my head isn't quite up to speed with the date eh?

Once again we woke up late, and I was reluctantly told to get up by Hague. I could have happily slept for many more hours :) However, I was hungry when I got up and so I only had one cup of tea before starting on breakfast. I realise that fried eggs seem to have become a rather large staple for my breakfast recently so today I thought I'd ring the changes a bit. 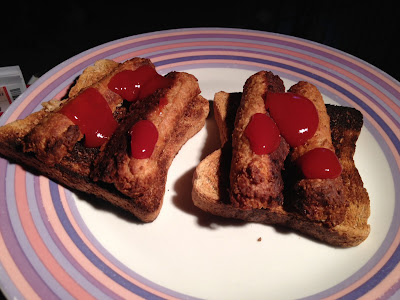 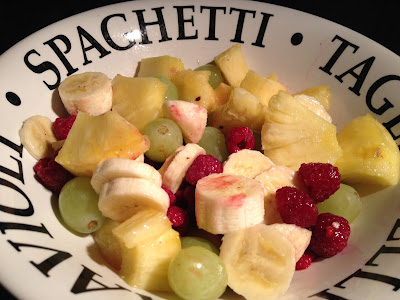 I had planned on a sausage sandwich, but as a slice of bread from a 400g loaf is rather on the small side it made more sense to just have the sausages on top as kind of an open sandwich. As I knew that would never fill me up I had a large fruit salad as well, with pineapple, banana, raspberries and grapes. All washed down with yet another large cuppa. I've  been a bit of a tea monster today.

After breakfast we tuned into the football. It was rather a frustrating game, with West Ham going behind at first, coming back to a well deserved 2-1 lead before lobbing away the 3 points. Plus all the goals were scored by players from our Academy too. So annoying, but at least Elf was on afterwards, so that cheered me up :)

Whilst Elf was on I threw a spud in the oven. I didn't think a spud on it's own would be enough and so I fried off some courgettes in some BBQ frylight and with a little bit of my chilli and garlic grinder. When they were practically cooked I threw in some spinach too. Some tomatoes finished off the side dish! 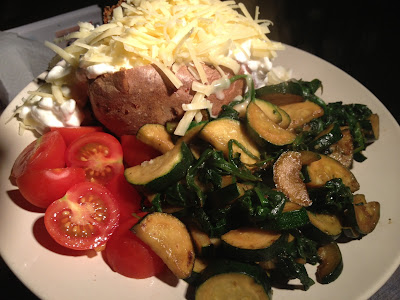 The courgette mix would have been lovely with some creamy pasta too, but they worked with my spud too - which was topped with cottage cheese and my HeA of reduced fat cheddar.

With Elf finished and dinner eaten, I fancied a long soak, and so me and my Kindle departed for a while to enjoy a very hot, Cinders fragranced bath. I've now managed to finish Eclipse, and have only got Breaking Dawn to read, guess I need to catch up with the films after that eh?

As always, hunger struck again, and soup seemed an easy solution when I had no healthy extras left. 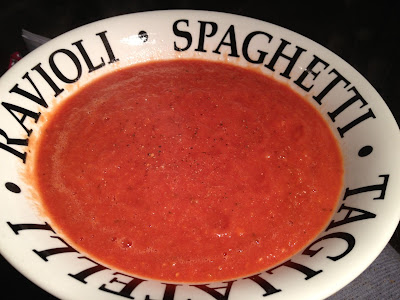 It was sort of based on the magic soup, but with added veggies. I blended together a tin of tomatoes and half a tin of beans and then added them to a pan with some casserole veg, dried thyme, garlic, a pickled onion and a couple of slithers of lazy ginger. I just let it simmer and then once everything was cooked I blended again. Filling, quick and delicious, perfect for when you can't be bothered.

After that I had my firm favourite of the moment for dessert. White chocolate Quark :) 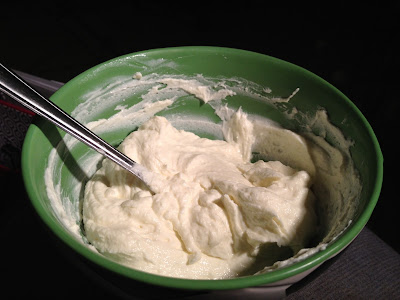 Whilst the night is still relatively young (in my mind) I doubt I'll have anything more to eat tonight, I've had plenty of superfree and I'm pretty full!

Quite heavy on the syns today for me, but still within my 15, but I wanted to get the synful sausages eaten  and out of the freezer, and I've had a right tea head on!! Tomorrow I'm working nights, so I'll blog all about Monday when I get in from work on Tuesday morning :) I'm sure you're used to it by now!

So I'll shall say goodbye, and just leave you with today's Advent choccy :) 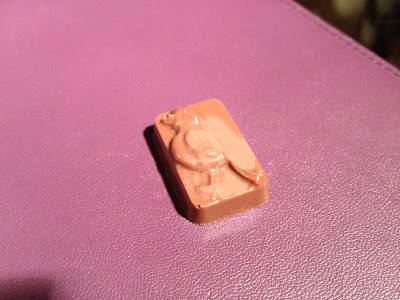 I'm guessing he's supposed to be a Robin? lol, He was tasty anyway :)