I'm supremely grumpy today, despite expecting a gain, and despite a lovely pep talk from my Consultant with some more ideas to try, I'm still really grumpy about being a lb heavier than I was 3 weeks ago. I was really hoping to get my 5 stone award by the New Year and that is now looking distinctly unlikely unless I have 2 weeks of good losses, and seeing as I have a work meal out during one of those weeks......*sigh*

Anyway, enough of me whinging, the lb is on, and it must be lost again, not least as I have now only lost 4 stone 6.5lbs, and so need to "earn" my latest award again! Apologies for no blog yesterday, but I was stupidly tired and went to bed not long after dinner. Add to that the fact that my laptop has decided that it can't find the hard drive and thus won't boot up and you can see why the blog fell by the wayside.....sorry :(

So, Tuesday. Once again we spent far too long in bed, and so a quick breakfast was in order. 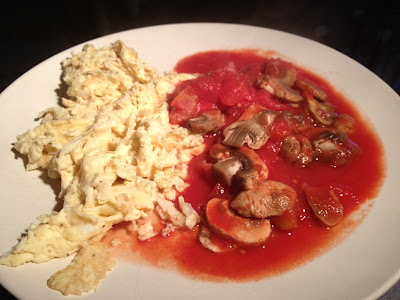 I guess it doesn't look overly appetising, but it was rather nice, and ready in 5 minutes which is always a bonus! Even though we didn't have a huge amount of time I did manage to throw some bits and bobs into the slow cooker so that dinner would be ready when we got in.

And so to work, once again with Hague in the passenger seat. With him safely dropped off it was straight to it for me, and with a busy start to the shift I was quite hungry when I got  my first break. 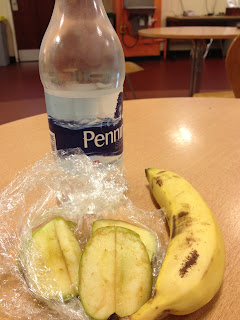 So I polished off my apple and my banana in record time whilst having a much needed relax! One good thing about being busy was that the day went quite quickly, and before I knew it it was lunchtime. 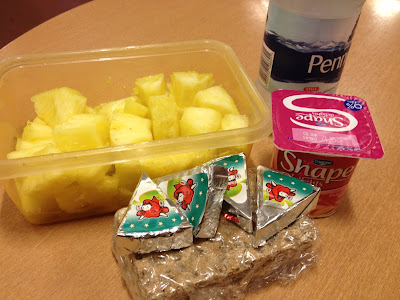 I'm really enjoying pineapple at the moment, and so there is a whole one chopped up there, plus 4 Ryvitas and my HeA of blue cheese light trianges. It's fast becoming one of my favourite lunches, as it's really tasty and surprisingly filling! So filling in fact, that I didn't have anything during my last break!

When we arrived home, the slow cooker was smelling lovely, and it was great to walk in the house and have dinner ready and waiting. Today's dinner was chilli, thrown together in 5 minutes and just priceless to have waiting after a long, busy day at work. I managed to put away two bowls, and so I have none left for work :( 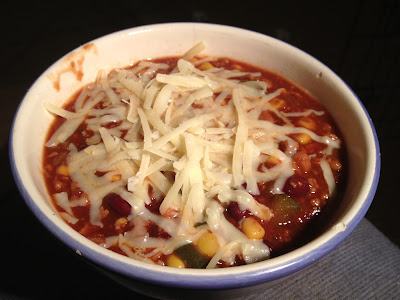 It was really nice too :)  Plus, of course as it's December, my little Advent calendar chocolate has to be covered here too! 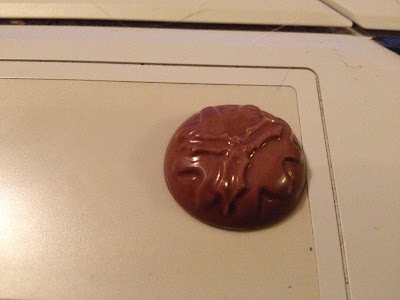 And so onto Wednesday - weigh in day for me this week as I'm working through afternoons. After last weeks gain I was hoping that maybe, just maybe I'd had a loss after being good the previous week and compensating for Hague's birthday by reducing my syns, but alas, it was not to be, and for the second week running I've gained 1/2lb. Now, I know in the scheme of things that gaining a lb isn't too bad - but I really wanted to get my 5 stone award by Christmas, to have that build up of momentum to keep me going through the tricky bits of the festive season, unfortunately I'll have to swallow a gain, and not let it affect me.

When I got in from weigh in, rather than wallow in synful self pity I made myself a nice breakfast and got busy whilst it was cooking. 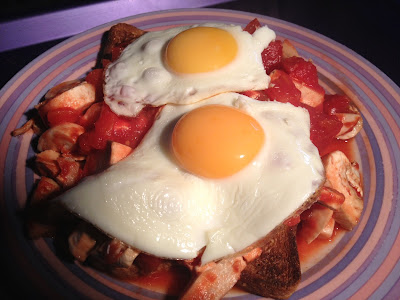 There are two slices of toast hiding under that mountain of mushrooms, tomatoes and toast. The cooking method for mushrooms that I discovered yesterday (mixed them in with the tomatoes and microwaving them) didn't work quite so well with this many mushrooms though, so they were almost raw. Oh well, live and learn! Whilst breakfast was cooking, I sorted out my lunch for work AND tonight's slow cooker meal! That's how to deal with a gain right? :)

Today's breakfast fortified me slightly better than yesterdays and so my first break snack was just an banana and a mug of tea. 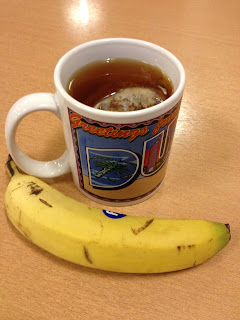 Lunch had posed a wee bit of a problem, as I did myself some soup.A very quick one mind you, I boiled up some onion, broccoli  spinach and stock and then blended it. My flask is no good, and I'd made quite a lot of soup, and so didn't know how I was going to transport it. An empty 1 litre squash bottle came to the rescue, although I'm not sure what people made of it sitting in the fridge...all green and lumpy lol! 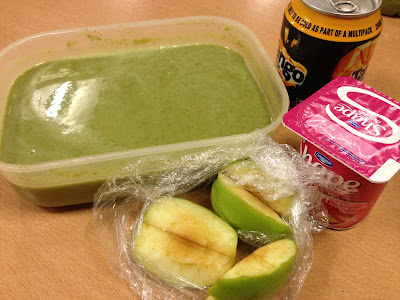 As you can see, I had it with an apple, yogurt and a can of Tango. I actually managed to polish off the whole litre of soup! These cold days make me rather hungry :) On my final break I fancied something sweet, and luckily I always lob an Alpen Light bar into my snack bag for work (as well as a packet of French Fries) and so that came to the rescue today. 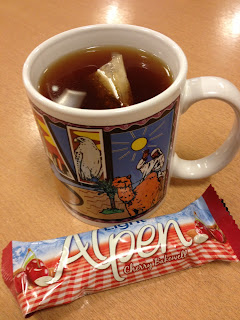 It was a rather cold Hague that I collected after work after he'd walked around from the Sorting Office, and off we heading home, with another slow cooker meal awaiting us! 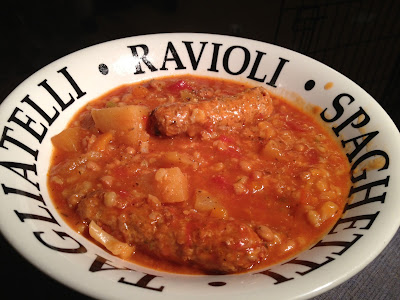 Sausage casserole was today's attempt, and rather lovely it was too. As it was made with the LM rosemary and red onion sausages it was syn free :) Once again it was a case of throwing various bits into the slow cooker and crossing fingers!

That was it :) Hague had his with some pancakes, but I had mine as above, and so it was syn free, warm and very filling!

For afters I gave one of Sacha's suggestions a go, an Options sachet stirred into a tub of Quark. 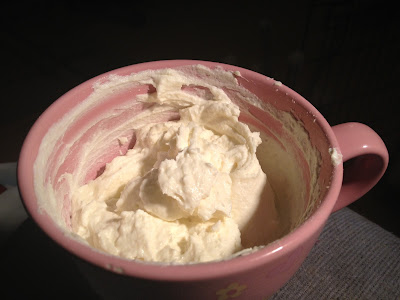 It was really, really lovely! I used a white chocolate options and it tasted really delicious, with some mixed in, and maybe some synned digestives it could be a great cheesecake substitute.

As you may have noticed, I've only had one A and one B choice today. Claire has suggested that I give Extra Easy a go for a week, reducing down my Healthy Extras to one each. However, I will be choosing my B choices from the full green list as it contains more variety - including cheese and nuts and seeds which are sources of protein for us veggies! So here goes another suggestion, and hopefully this one will mean I get a nice loss next week. My 5 stone award is 7 1/2 lbs away. Not impossible in a couple of weeks, but it'll mean I need to be totally on plan. Wish me luck!