WooHoo! At last the week is done :) It's not been a bad week, I've just been waiting for this weekend as it's Hague's birthday :)

I had a lot to do this afternoon after he was packed off to work, and so once I was back indoors I made myself something to eat, as I knew I wouldn't last until 7ish when I normally have dinner. 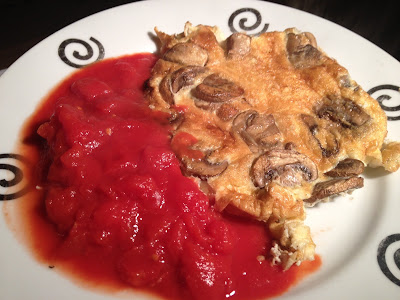 Just a simple mushrooms omelette with tomatoes, but it fortified me for wrapping and various other birthday related thingums :) Once I was done it was getting on for 4.30 and I was absolutely shattered so I headed up for a nap. 2 hours later and was up at at 'em, soaking in a nice hot bath - perhaps not the perfect way to prepare for a night shift, but I wanted to be all lovely and fragrant for Hague. Dinner was a bit of a rushed affair as, as always, I spent a bit too long in the bath, so I cobbled together a sort of Chinese-ish dish. 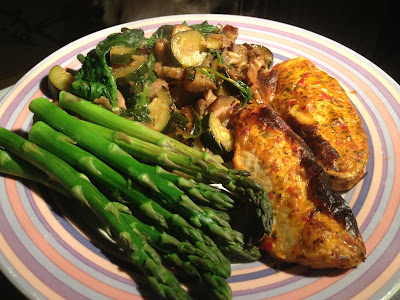 A couple of the Quorn sticky fillets with some asparagus (obviously...) and a sort of stir fry of courgette, aubergine, mushroom and spinach. I used the wok FryLight for the veggies, and added in some soy sauce too. It wasn't hugely filling, but it left me nicely satisfied, although in a bit of a rush to get to work.

After a meeting to start with, work was all about cleaning. I don't actually mind the cleaning too much as I can just get on with it and have my breaks when I want them. It's not exciting, but the time does seem to pass quite quickly. Anyway, for first break, I had a taste of my latest new Healthy Extra, Bear yoyo's. 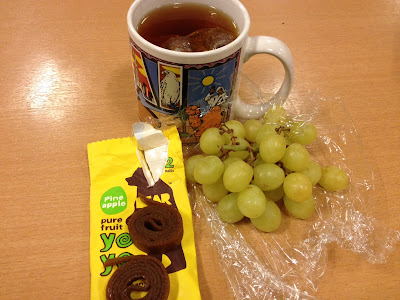 You get two in a pack, and you can have 4 for your healthy extra. They are basically just fruit and very tasty they were too :) As you can see I also had a cup of tea (Red tea with honey - only honey flavour though so no syns), and some grapes.

After much more scrubbing and polishing it was time for lunch. Leftovers came to the rescue once again, this time it was magic soup. There was a lot more of it, but I'd eaten quite a lot before I remembered to take the picture! 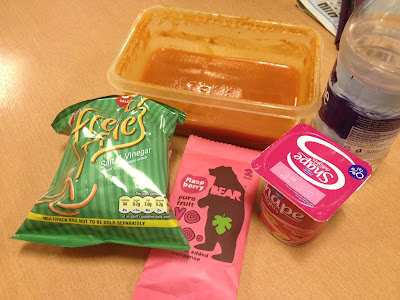 Quite a substantial lunch for me really, a different flavour of yoyo to taste (also nice) and a little treat in the shape of French Fries :) My final break was only a very quick one, as there was a lot of cleaning left, and not so much time, so it was more of a splash and dash. 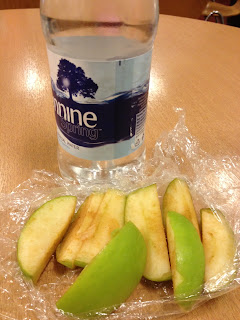 A good old apple and a bottle of water! Plenty to drink to day as you can see :) Before long it was time to stop scrubbing glue-ey bits of machine and head home, and here I sit, once again armed with a hot chocolate as I witter on to you all :)

Now, as I may have mentioned, today is Hague's 36th birthday (yes, he's a toyboy hehe), and I think I'm probably more excited than he is. I'll be having a flexi day, although I don't know what we're doing as he is deciding what we're going to do. However, there is one downfall of a birthday I have managed to avoid. Birthday cake. Hague isn't overly fond of birthday cake anyway, and when I buy one he'll normally have a slice or two and I'll end up scoffing the rest. Not this year though, I have combined two simple facts to come up with the perfect solution to the birthday cake conundrum...

So here is my perfect solution..... 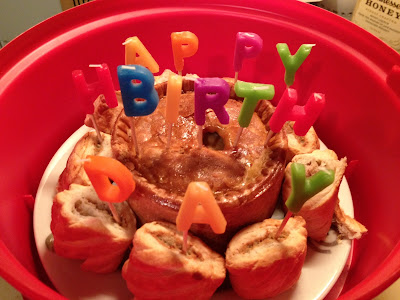 He'll love it, and I won't eat any of it :) Win Win :) Now I just have to hope that he doesn't read my blog before I present it to him!