I seem to have packed a lot into today, and despite it barely being past 11pm, I'm tired already! To be fair, I was up rather early for me, as I stirred not long after 9, and after checking my phone and reading for a little while, decided that I would be better off getting out of bed rather than going back to sleep. So downstairs I came, to the joy of the animals, who have been missing us rather a lot this week and had the first of my cups of tea of the day whilst I pondered what to have for breakfast.

A couple of hours of Christmas foodies shows, and another cuppa later and I'd finally decided what I fancied and I'm sure you won't be surprised to hear that it involved eggs and wedges :) 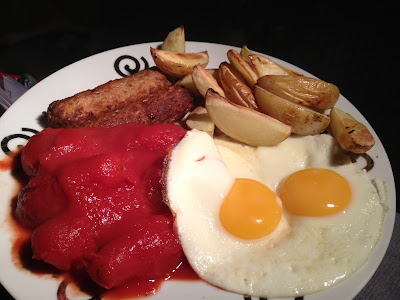 The variety in the tomatoes from chopped to plum is courtesy of Asda substituting them last week, the rest is quite predictable, with the LM red onion and rosemary sausages, fried eggs and wedges. Not long after that was eaten it was time to get myself up and dressed and ready to take Hague to work.

After dropping Hague off I headed off to see my friend Gemma, I've not seen her for months and it was rather nice to be described as miniscule (compared to the last time she'd seen me), Gemm's not done bad herself, shedding several stone of baby weight and she looked bloody marvellous. It was lovely to chat and catch up with Gemma and her sister, Cara, as well as the littlies, and then later with Simon, Gemm's hubby who I used to work with (before he deserted me) and who I love to bits - there's nothing like putting the world to rights with old friends to ensure a happy mood stays in place :) So several hours, and several cuppas later it was time to head home via Asda to pick up the shopping.

The less said about that the better really, as it was a bloody shambles from beginning to end, in fact I even sent a grumbly email as it had been such a pain in the arse, with my shopping merrily being loaded in someone else's car whilst I waited oblivious, missing items, no paperwork and a bill £5 more than I was expecting....SO annoying. Anyhow, with that picked up I could head home and relax for a wee while.

With a houseful of food, you'd have thought it would be easy to sort out what to have for dinner wouldn't you? Unfortunately not. I spent a good 10 minutes opening various cupboards, the freezer and the fridge waiting for inspiration to strike. The thing is, I had a huge case of the Can't Be Arsed's, and really wanted something that would take no effort and be delicious, something with about as much effort as picking up a phone. I resisted the urge to call out for a take-away though, and threw together a sort of curry type thingum instead. 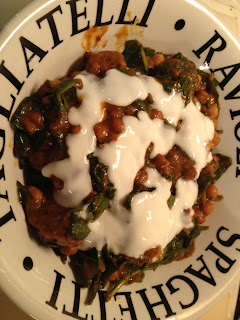 Blogger is once again decree-ing that some photos shall be sideways regardless of how many times I try to right them, so apologies for the weird angle, but the bowl contains a tin of chickpea dahl, 2 huge handfuls of spinach and some Quorn meatballs all heated up together and then topped with some yogurt. I won't enthuse about it, another day I might have found it delicious, but today, it did the job of stopping me feeling hungry, which is all you can ask of food really :)

I followed it up with something I have a bit more enthusiasm for (even when it's on it's side). Quark and white chocolate Options. 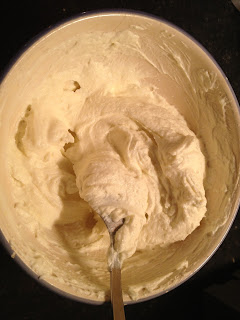 It wasn't long after dinner than I went and picked up Hague from the station and once indoors and warm again I finished up today's noms with my HeB and today's mystery Advent chocolate. 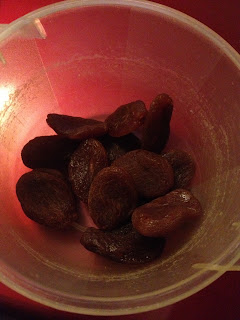 75g of semi-dried apricots for the HeB, and as for the chocolate, I have no idea what the hell this is supposed to be! Your guess is as good as mine, and my guess is WTF lol! 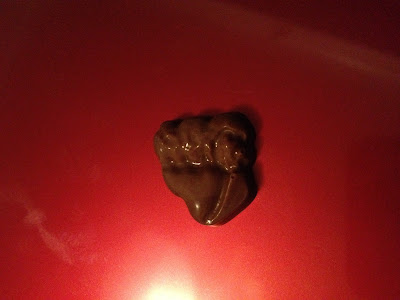 I seriously have zero idea about this one, but I'm too tired to lose any sleep over it ;)

I'm feeling the busy day and the early start, so it won't be long until I head to bed. It's been a long day, but a good one (apart from the bloody Asda episode), catching up with good friends is always a pleasure, and being home with Hague is another, which I'm heading off to enjoy. Night my lovelies xx