It's not often you can say that you're feeling 10 years younger, but today I can officially say that :) At work, we have regular medical screening, and today I had my yearly lung function test. This involves a couple of tests to test my lung capacity and efficiency. As part of the test, I'm weighed and was complimented on my weight loss, but after the tests, when going through my results I was informed that last time I was tested a year ago, I had the lung function of a 41 year old, and this year, the results are equivalent to a 31 year old. So there you go, I'm 10 years younger. We all have our own reasons for losing weight, mine are mostly quite petty, mostly involving pretty clothes and high heels, and for most of us, improving our health is a little way down the list - however, that test today has proved to me that even though I have a long way to still go on my journey, my body is already becoming healthier. It's a nice feeling :)

The day didn't start off quite so well, with the alarm going off at 4.30, it just never gets easier. As I went to bed so early last night I'd failed to prepare anything for breakfast, so I had to throw together some last minute bits, failing utterly to do anything proper for my main break.

I'd woken up hungry again, and had myself a banana whilst driving in, but even that didn't take much of an edge off my hunger and I had a fair amount at my first break again. 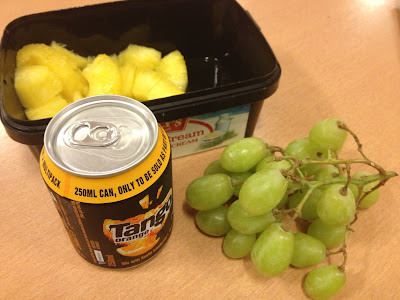 Sugary Tango once again, along with some grapes and pineapple, I really am getting through all my fruit this week! As I'd said, I hadn't managed to sort out any breakfast, but luckily my lung test was booked for just after the canteen serves breakfast, and so I headed up there early enough to feed myself :) 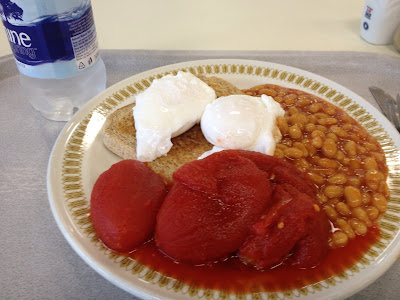 I don't know what your work canteen is like, but at breakfast time, mine requires rather a lot of willpower. They serve the most delicious cheese toasties - a proper doorstop slice of bread topped with lots of cheese which is somehow melty and creamy and just gorgeous.....they're probably about 75 syns each, but damn they're good, but as you can see, one didn't make it onto my plate today. Breakfast stayed syn free, with a slice of wholemeal bread, topped with poached eggs and with some baked beans and tomatoes on the side. It made a pleasant change to have a warm breakfast at work too.

After a huge breakfast like that, my final break involved just a syn free can of drink. 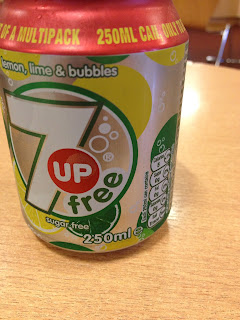 When work was over and done with, I headed into the city once more for another stolen hour with Hague. Today we went to the Wetherspoon, where I put away a couple of cups of tea before I had to whisk him away to work all too soon. With our mini-date over and done with it was time to head home, where I had to attempt some domestic goddessry.....as you may have noticed from this blog, it's not one of my strong points.

I was planning to make some sausage rolls using filo pastry. I figured that if I sliced each sheet into 7, that would make each sausage roll just one syn, perfect for nibbles. However, the filo pastry had other ideas. It decided that it wanted to stick together, rip apart and just generally be a total pain in the butt, so I ended up with only two usable sheets, which utterly refused to come apart, and so rather than one syn per roll, they ended up as two....and I only ended up with eight sausage rolls, which didn't go very far in our large Slimming World group. I think once again we've had a Domestic Goddess Fail! They did taste nice though, honest! 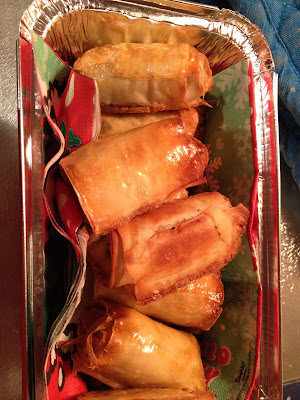 They are just the syn free Linda McCartney sausages, baked in the oven, and then wrapped in the filo, egg washed and baked until the filo just browns off. Hopefully you'll have better luck with the bloody filo than I did ;)

Our party was fabulous, with lots of delicious tasters, and an amazing raffle, plus the usual fantastic banter and support. I really do have a wonderful Slimming World group, and I couldn't have done this well without them :) I even got dressed up in a party dress, one of my gorgeous Vivien of Holloway dresses that I had outgrown many a month ago, but that now fits :) 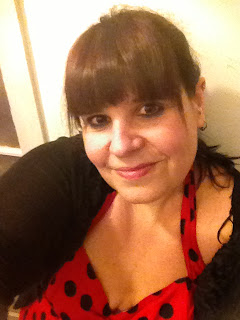 Plus, I won a prize in the raffle! 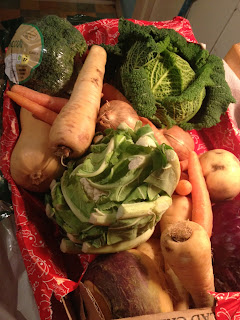 That little lot will keep me going for a while - all I need now is some sprouts and Christmas dinner is well and truly sorted :) Oh....and I weighed in as well, I stayed the same, which is slightly disappointing, but not unexpected on an early shift, due to me eating all day before weigh in, which is something I don't do on any other shift. Under normal circumstances, I'd say it'll be gone next week, but as next week is Christmas, that might be a forlorn hope!

With weigh in done, it was dinner time, and as Hague is bloody marvellous he'd put me a stew in the slow cooker before he headed to Norwich, and so that was ready and waiting for me, with some left over for him to eat when he gets in (or for me to take to work). 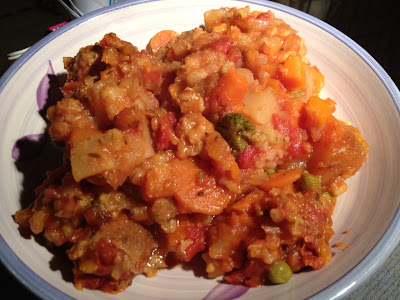 I'm reliably informed that it consists of "those sausages, lots of veg and a tin of tomatoes all lobbed in" When I got it I added some pearly barley as well, and a little bit of rosemary too. It was lovely, although I only had a small bowl as I'd had quite a few nibblies at group :)

With the stew eaten, I've been relaxing with my iPad and a Christmassy Great British Bake Off, I've also treated myself to my missing Advent Choccies! 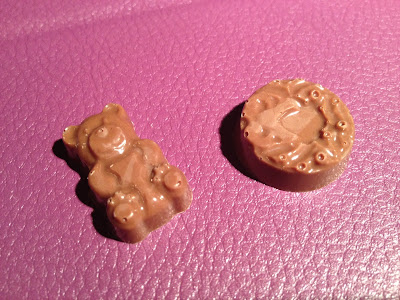 Obviously a teddy bear, and I think the round one is supposed to be a holly wreath....I'm going to miss trying to guess what some of the more random chocolates are!

Most of my syns were at group, but I enjoyed everything I tasted. Much as I'd love to collapse into bed right now, I promised Hague I'd pick him up from the station tonight, and so I still have over an hour until I can sleep....roll on Friday I say!