Yuck. This cold has well and truly taken hold. In fact I've felt worse as the day has gone on :( I did manage a lie-in, but I could have had a few more hours! Reckon it'll be an early night for me!

I did my usual bad habit of waking up and drinking lots and lots of tea. 3 huge mugs this morning before I realised that eating would be a good idea. It was actually getting dark before I had breakfast, so I'm not actually sure what you'd call this meal! 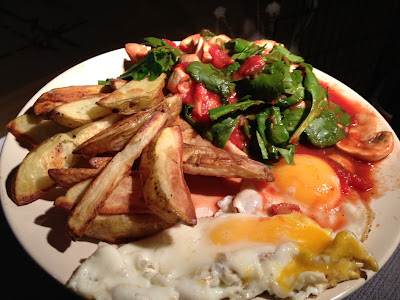 Whatever it was called, it was lovely, despite the broken egg! For most of the day I've been on the sofa, feeling rather sorry for myself whilst we clear down some of the programmes on the Sky+ box as we were up to just 13% free. Ooops! After watching episodes of Red Dwarf, Whitney and The Ricky Gervais Show I was feeling peckish again, but I didn't have a clue what I wanted, just that I wanted it to be very easy! 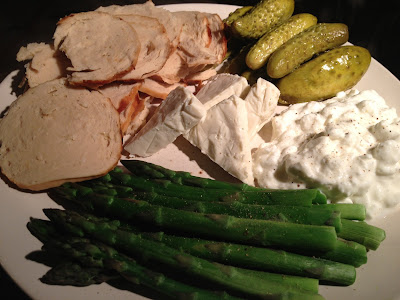 I'm currently addicted to the Quorn Roast, and when they're part of the 3 for £5 at Asda (they're £3 each) it's rude not to pick one up every week :) I know the meal was a bit of a mish mash with asparagus, cottage cheese, blue cheese Laughing Cow's  and gherkins, but I enjoyed it and I still have some Quorn left which I'll probably have tomorrow.

As it's Saturday, I decided to splurge my syns on some vanilla vodka. Normally what I'll do is use a measure for my drinks to ensure I know how many syns I've had. Today I took a different tack and measured out 150ml of vodka, knowing that was all of my 15 syns (it's 2.5 syns for 25ml) So when it's gone, it's gone! 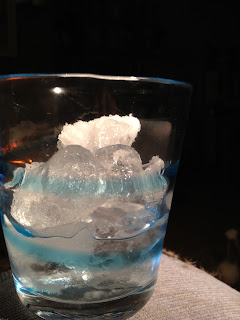 It's definitely more syn friendly for me to drink the vanilla vodka on the rocks, I drink it really slowly and so the drinks last much longer :) It was only after a vodka or two that I remembered I had the mix for magic pancakes left in the fridge from my failed attempt yesterday, so I figured I might as well cook them and have them for tea! 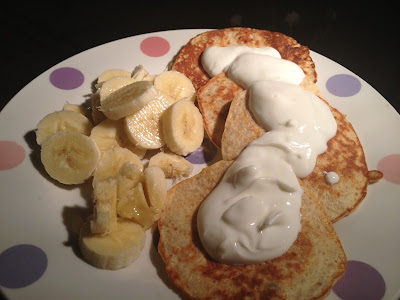 I made the pancakes a lot bigger than normal, so instead of 8 or 9 I only got 4, but they were still gorgeous!In case you are one of the few that don't know how to make them, here goes...

Soak the oats in the yogurt - I use the Shape delights apple crumble flavour, but if you're not veggie you could use a muller light or whatever you fancy. Now, these oats were soaked overnight (and then some), but I normally only leave them to soak for 45 minutes or so, which seems plenty. Once you've left the oats for a while, just mix in two eggs and you'll have your batter mix. Just cook the batter over a low heat, and turn the pancakes once they start to form small bubbles at the edges. You really have to try these as they're amazing, and really don't taste like diet food!

As I'm yawning, sniffing, coughing and generally being grumpy, I don't think I'll be up too late tonight, and I'm heading for a bath soon. Here's hoping a hot bath and an early night help me shift the sniffles, otherwise it'll be less Miss Slinky and more Miss Snotty at group on Tuesday :)

As I've not left the house today, I've not had a chance to ooze confidence for my Press Play challenge - but we're probably heading out tomorrow, and so I shall be making sure I make that little bit of effort :)