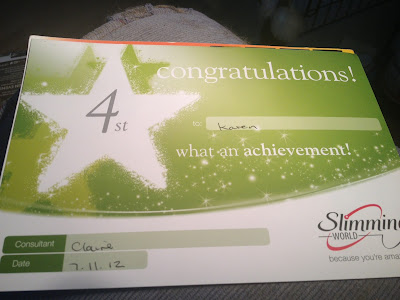 I did it!! I actually managed to lose 2lbs, so have now lost a grand total of 4 stone 1.5 lbs. I'm rather proud of myself I must say, and when I walked into Claire's group on 12th of June I didn't really imagine that I would be 4 stone lighter less than 5 months later. This Slimming World lark seems to work ;) I even had ladies waiting for me to weigh in to see if I managed to lose that 1/2lb which was SO lovely!

After (eventually) weighing in at group - I managed to turn up late - I headed home to a rather tasty breakfast. I appreciate opinions may be divided about the deliciousness of my meal though. 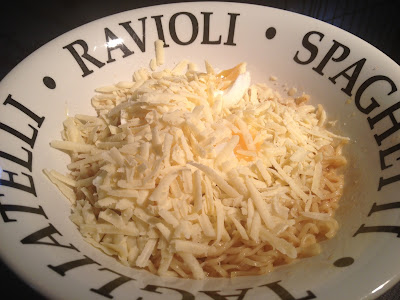 Under that mountain (60g) of cheese is a packet of Supernoodles and a couple of hard boiled eggs. An odd meal, but it works for me :) I followed it up with some pineapple to cover my 1/3 superfree! 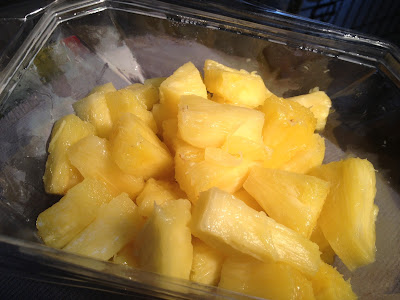 So weighed and fuelled it was time to head to work - at least it's hump day! As always I made sure I had plenty of supplies for the 8 hours there. 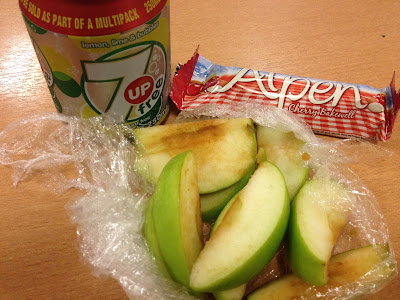 I know I take the same things to work most days, so apologies for the Groundhog Day quality of my blogs recently. Personally I don't mind having the same things as my snacks for work, as they do the job of keeping me away from the evil vending machine, and keeping me going whilst I'm there.

Lunch was in fact rather more filling that this picture would suggest as I'd eaten the portion of leftover stew before I thought to take a picture - sorry! 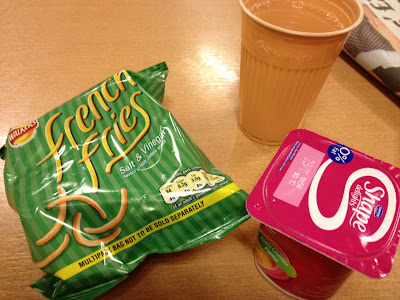 I also think I'm a wee bit addicted to French Fries, although I'll have to hide them from now on as the resident Crisp Monster (aka Hague) has just had the last packet! Anyway....last break arrived and I was still full, so my banana made the journey home with me.

Dinner was ready when I got in. When I left for work, I'd told Hague that I wanted veggie burgers in pitta bread with a bit of salad, and that that'd be plenty. When I was at work I requested some sweet potato wedges as well. A bit later on I added onions too. Yet, he still loves me, what a guy! 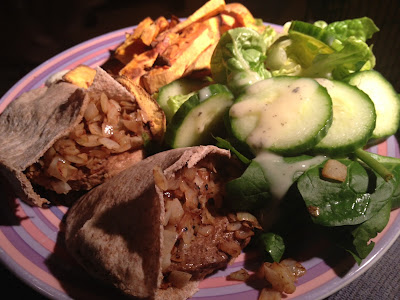 It actually ended up quite a big dinner :) It was lovely and felt rather naughty, despite only having 2 syns on the plate. It certainly filled me up, although as always I need a couple of large cups of tea during the evening.

Today has seemed rather long, with the euphoria of this morning, and then another long, tedious shift at work, although I managed to get enough activity sorted for another week towards my Bronze body magic award, and it's only now that I can settle down with a cuppa before heading to bed. I did do one other thing today. I completed my first Press Play challenge. A list of why I was doing the challenge, and what I wanted to achieve from it. I'll share it with you when the time is right....