After blogging last night about what a lovely day I'd had, we sorted ourselves and got ready to head to bed. As per usual we sorted the animals out, sent Boo outside, fed the cats and checked on the Gerbils, but last night JCB didn't poke his nosey little head out when we went over. Hague delved around and found him curled up and obviously not great. We settled him back in expecting the worst and went up to bed.

After another decent night's sleep, I woke up worrying about JCB, but he was still hanging in which was a relief, and so we set about getting ready to head to The Parentals, who'd have thought that I'd be blow drying and straightening my hair on a Sunday, oh how times change :)

We hadn't been round to The Parentals for a while, so it was nice to catch up. My Nan was there as well, in good spirits and chatty, which is always nice to see. My Mum is the one paying for me to attend Slimming World, and so she served up a wonderful SW friendly dinner for me. 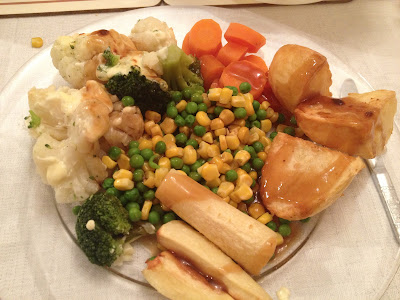 Potatoes and parsnips roasted in frylight and broccoli and cauliflower cheese made with LowLow, plus sweetcorn, peas and carrots. She looks after me doesn't she? She made sure Hague was properly fed ready for work tomorrow as well with his dinner including a giant yorkshire pud and 2 lamb chops! For dessert Mum was serving up vanilla cheesecake and apple pie, I resisted, but when she dished up Dad's apple pie she served it with some Carte D'or light ice cream. With my handy little SW app on my phone, I checked the syn value of the ice cream and discovered it was only 6.5 syns for 100g and so I had myself a dessert as well :) 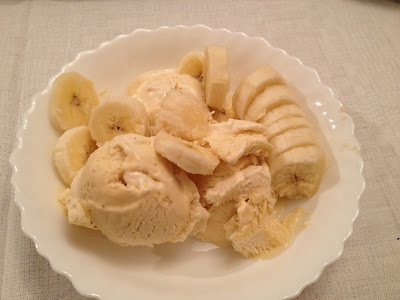 With dinner eaten, we spent an hour or two just putting the world to rights and playing the Logo Quiz on Dad's iPad (have I mentioned how much I NEED one of those - I'll review it for my blog if anyone wants to give me one lol). It was a really nice afternoon, again, a nice simple afternoon but lovely nonetheless. When we were home, the first priority was checking on JCB. First of all we had to find him as TiggerPig had buried him under all the bedding - so obviously we feared the worst, but he was still going. He wasn't good though, quite lifeless and feeling cold, and so Hague and myself took it in turns just to hold him and gently stroke him until he was gone. Very sad, but at least we got to say goodbye to him. RIP little JCB :( 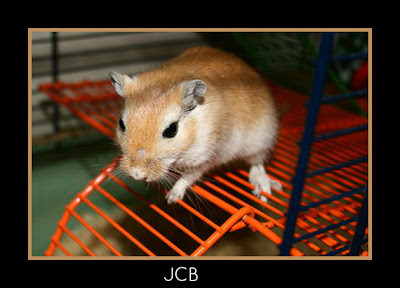 And so The Menagerie is reduced once again, just the one Gerbil left now, TiggerPig - who seems to be unphased and has been re-arranging the cage to his liking. Life goes on I guess.

Speaking of which, after getting all emotional over JCB, I realised that I was hungry again and threw together a quick dinner. 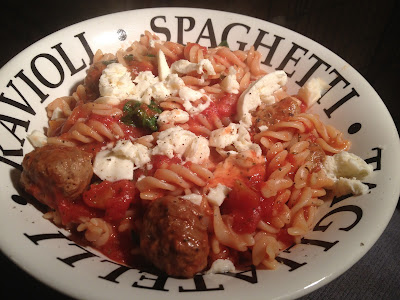 Pasta, with tomatoes, herbs, Quorn meatballs and mozzarella. Super quick and it'll keep me going until bedtime, which'll be a late one tonight as I'm working nights tomorrow.

So an odd day today. It's so hard to say goodbye to a pet, even a small one like a Gerbil, so that's obviously left me upset, but apart from losing JCB it's been a nice weekend. It's nice to get back to a point where my mood is mostly happy and optimistic, a lot of that is down to my depression and anxiety improving, but some of it is also down to me feeling better about myself. It's a rather good feeling to have.