I don't know what's wrong with me at the moment. I can't stop eating! Luckily, I'm sticking on plan, but I'm putting away quite a lot of food *blush*

Obviously with starting work at stupid o'clock, it does give me a lot of time to eat, and today the eating commenced at about 8am when I had my first break. Removing my hat wasn't the best idea though. The Fringe did not react well to being stuffed in a hairnet then covered with a hat, I spent the day looking like I had a mullet...not the best of looks! Oh dear....still, back to the food eh? 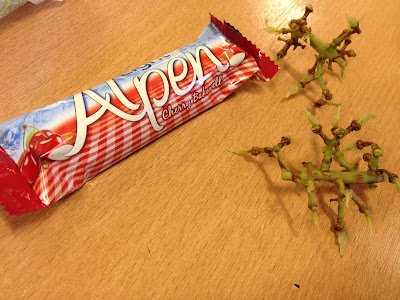 There were actually grapes involved, but I ate them all before I remembered to take a picture - what can I say? It's too early! My usual breakfast on earlies is muesli with yogurt and fruit and today was no exception :) 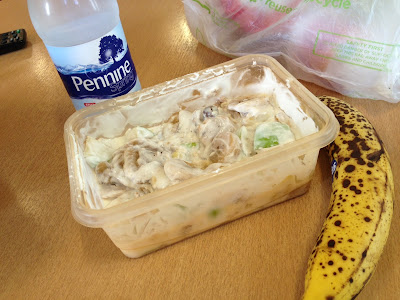 There were apples and bananas in the muesli, but we're running low on fruit so another banana it was to accompany it! I did have a Shape rhubarb crumble yogurt too, but didn't take a picture as I was planning on having it later, but was still hungry (theme of the week so it seems!). So breakfast was yogurt with banana, followed by yogurt and banana lol!

After a briefing after work, and then visiting the work shop, I finally got home at close to 4pm, weary and hungry. So hungry I couldn't even wait for dinner, so tucked into the leftover Quorn roast from last night. 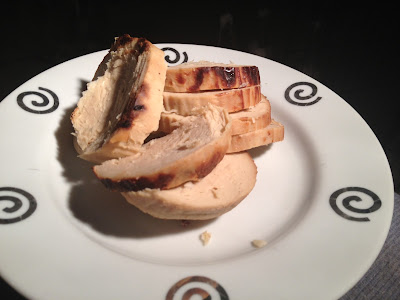 I'm still rather loving the roasts, and have three more on the shopping list for this week :) Not long after that Hague declared that he fancied eggs, wedges and beans - so for once we ate the same meal, at the same time! Shocking behaviour! 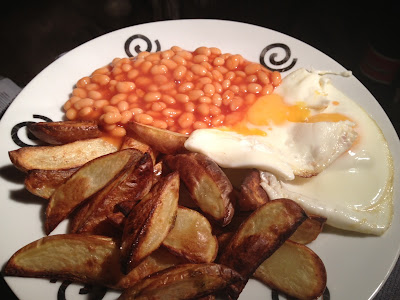 Now, as you may have noticed, my superfree has been really lacking today. I know there are debates all over FB about the 1/3 superfree, but I tend to try and have it most days, but today, I've not quite managed it, despite fitting in quite a lot of fruit. I'm sure one day without quite so much veg won't hurt me though, guess the scales will tell eh?

After dinner, I wanted to wind down so headed for a bath, once again accompanied by my friendly little worms, who were demanding even more food! So I took some snacks with me - hehe - terrible really! 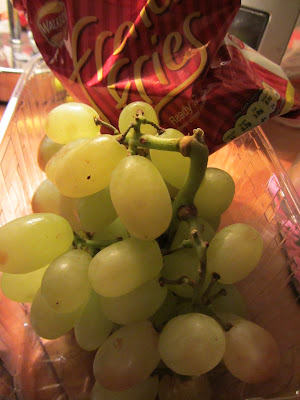 French Fries and some grapes, the perfect accompaniment to the second Twilight book - yep, I'm sucked in, Hague isn't impressed! After my nice relaxing bath I managed to sort my fringe out, so I'll look normal for a few hours at least before bed and work bugger it all up again :) Another early night beckons I'm afraid, although I'll have myself a sneaky hot chocolate before heading to bed, and I managed to squeeze in a Healthy Extra A as the milk has gone off....once again Domestic Goddess-ry passes me completely! 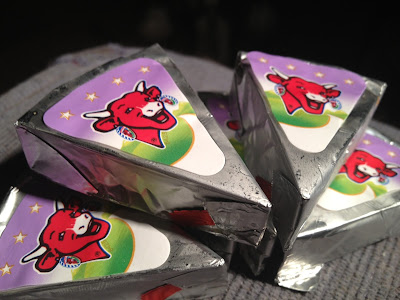 This week seems to have flown by, Thursday is now done with - and with it another deadline for Blowing Bubbles (the West Ham fanzine I write for) missed. Not good. I have to get a grip on things a bit more, my concentration seems to be focused on Slimming World and work at the moment, and I have to take time to complete other things that I enjoy too. Along with other little niggly jobs that seem to fall by the wayside. I'm going to try and set aside 30 minutes a day to get one of those little jobs sorted out every day. Organisation will become a skill I possess....maybe....or maybe I'll just get some jobs done :)