Today has just been lovely. From start to now, just lovely, it's not often you can say that about a day - and there's no huge reason for it - which almost makes it better :)

The day started off with a decent night's sleep and a wonderful lie-in, we were only woken up by the sound of the postman shoving the post through the letterbox. Normally this contains nothing but bills and bleaurgh, but today it included a lovely card with a note from my Consultant. She truly is amazing, and as I've said before, I know she will be supporting me right through to target and beyond. It was such a nice little boost to receive and it meant I started the day with a smile on my face.

We had planned to head into town early, but due to the rather long lie-in we didn't get out of the house until nearly 1pm. Not much of a problem though, and we wandered around various shops as a bit of an early birthday treat for Hague, as it's only a week now until his birthday. A couple of hours later and we had spent barely anything, but come home with lots of cheap DVD's, some gorgeous cherry tomatoes from the market and treats for The Menagerie. It was nice to be out as well, in yet another pair of jeans that I've slimmed back into, and my now faithful hat, which will probably be coming out a lot more often now the fringe is in place. Fringes and laziness do not mix ;) 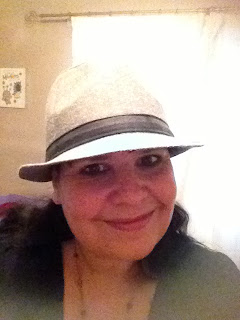 The Press Play challenge influence is still strong - make up on, and an effort made with what I was wearing. I'm really enjoying it!  As I'd managed to resist the temptations of Great Yarmouth town - if you don't know Yarmouth, the market place has several chip stalls, all selling delicious fresh chips with toppings varying from ketchup through flavoured mayonnaises to curry sauce and cheese. The smell pervades through the whole market....but I didn't have any. Hague wanted pastry goods from Greggs, home of the delicious flaky b*stard that is the cheese and onion pasty...but I didn't have one. The willpower was strong in this one today! So by the time we got home, I was rather hungry and did myself a lovely huge brunch! 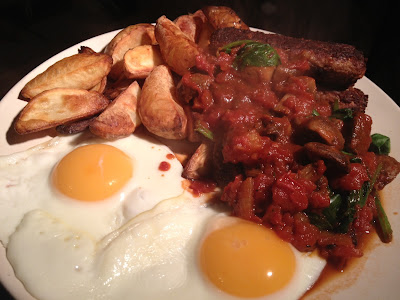 LM syn free sausages, with wedges, eggs and a mix of mushrooms, tomatoes and spinach. It really hit the spot, and was syn free as well, bit different to what chips and a pasty would have been eh? Saturday afternoon always involves Soccer Saturday in this house, and today was no different. There is something very comforting about having been out in the fresh air, and getting home and settling onto the sofa, nice and cosy with a cuppa. It just increased the happy mood of the day.

It took a while for me to get hungry again, but luckily when I did I had some of yesterday's soup ready and waiting, all it needed was nuking. 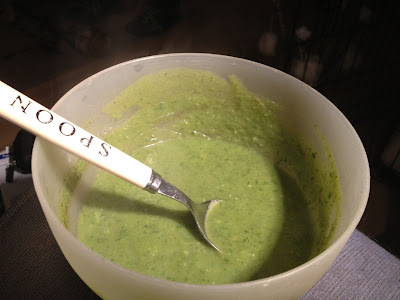 There wasn't a huge amount left, so I followed it up with a fruit salad. When I won Slimmer of the Week a week and a bit ago my basket contained a Pomegranate. I've never had one before, and I decided to throw caution to the wind and add it to my bowl of pineapple, grapes and banana. I actually really enjoyed it, another fruit that I like....another reason to be happy! 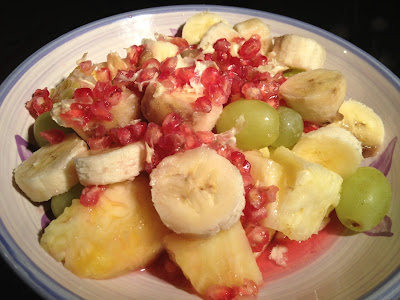 After I'd had the fruit salad, I decided to be a bit pro-active about this evening. We'd planned an evening of DVD's and normally we hit 9pm and realise we're hungry and both spend about half an hour in the kitchen not knowing what to eat. Not tonight, I decided to throw chilli ingredients into the slow cooker, so when we were hungry it would be ready. 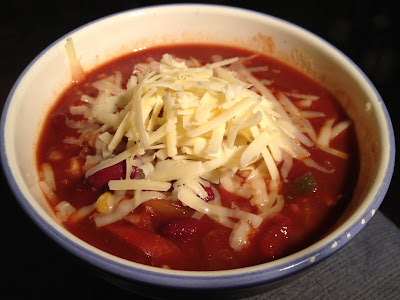 Today's chilli had Quorn mince, onions, pepper, sweetcorn, baked beans, kidney beans, tinned tomatoes, garlic and chilli. Frozen, tinned and from a lazy jar. Bloody marvellous :) Topped with my HeA of cheese it was perfect for a night in. I put away 2 bowls, both topped with a HeA of cheddar. Nom.

Now, as you may have noticed, not a syn has passed my lips today. There was a reason for that. I have planned to use all of them on Vodka this evening. 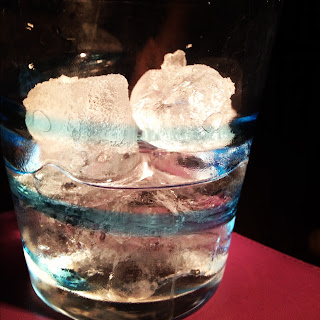 I make 6 25ml measures of Vodka a round 15 syns, a great way to use them up on a Saturday night as far as I'm concerned! I finished up with a couple of Alpen Lights whilst enjoying my last Vodka and Ricky Gervais' stand up.

I've not taken a picture specifically for the Press Play challenge yet, but I posted the progress collage on Facebook, and I think I shall be saving some of those comments to look through later, as some of the things people have said have been amazingly kind and will help me get through the times when I'm struggling which are bound to come at some point.

If you were one of the people that have liked or commented on the picture. Thank you, it means so much to me, and you have definitely helped make today such a glorious one :)