Oh I've been lazy today. My butt has barely got off the sofa, and I've spent most of the day draped in various animals.

I CAN feel a definite improvement in my health though, not so much lightheadedness today, and I'm only tired to a normal level, thank goodness for that :) I'm still having hungry days though, so I'm obviously still on the mend, but much closer to the final hurdle now I'm sure!

I finally felt up to making magic pancakes today, it's been a while, and I've missed the delicious little buggers :) 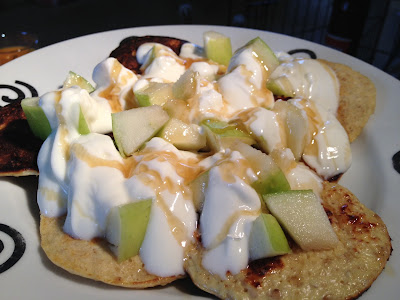 I guess I'd better share the recipe once again as well!

Soak the oats in the yogurt, I usually only leave them for half an hour to an hour, but some leave them overnight. When you're ready to cook, put a frying pan on a low to medium heat and spray it with fry light. Spoon the batter into the pan and leave to cook slowly. When the pancakes are ready to turn, they'll be easy to flip over, you just need to be patient. I served mine topped with apple, natural yogurt and a tablespoon of honey. Gorgeous!

I decided to take a small break from Come Dine With Me today and felt it was time to watch the Titanic mini-series I recorded back in April. That's four hours of my life I won't get back! There's a film called Titanic, which shows you life on the ship, with some fictional romance...so why make a mini-series that does exactly the same thing, but with worse acting, worse effects and even more cheese? I think I'll stick to Come Dine With Me from now on!!

For lunch, I figured some more cheese wouldn't go amiss and went for pasta. 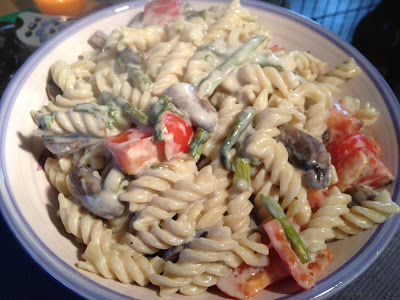 Lots of veggies (pepper, mushrooms and asparagus) roasted off and then stirred into pasta with 75g of low fat cream cheese and 25g of Stilton, I thought I'd splash out some syns! It really hit the spot, but then creamy pasta is a favourite of mine.

I whiled away the evening chatting to Hague and ploughing through more CDWM episodes before having a super easy dinner due to batch baking last time he was away! 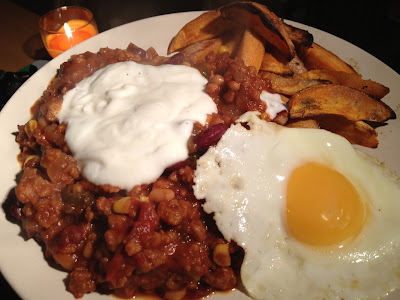 Quorn chilli with some sweet potato wedges, fried egg and "sour cream". The sour cream was actually natural yogurt, quark, lemon juice and pepper just mixed together. It tasted close enough for me and of course meant the meal stayed syn free. I realised after I'd eaten it that I'd forgotten the grated cheese, so that leaves me with a HeA to lavish on myself in the shape of a milky hot chocolate before bed :)

I think I'll be having an early night tonight though, much as I love having the animals upstairs when Hague is away, FlumpyCat demonstrated quite dramatically last night just why Hague won't have them upstairs....she spent most of the night, sleeping on my pillow or cleaning herself whilst practically sitting on my head. It didn't make for the most peaceful of nights. Perhaps I'll have to concede this point to Hague ;)

Oh, and just because she's been very cute today, have a picture of Bayleigh Boo :) 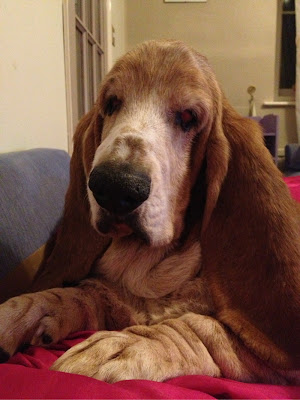