Frantically Trying To Catch Up!

I have been rather shoddy in my blogging behaviours this weekend (and yesterday) so I’ll start off with an apology for my slackness!! Sorry!!

As I may have mentioned (once or thrice) we were heading to London for an evening of merriment with friends both old and new to celebrate a birthday. I had already made the decision that as I was staying away from home, I’d be flexible, but only when I was away from home, so the day started off on plan. 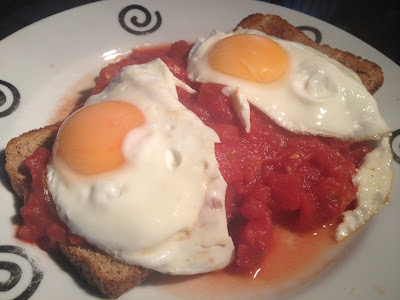 I then went and picked up an exercise bike that a kind FB’er had offered to me, so I now have NO excuse not to get myself on the Body Magic train! We then headed out to The Parentals to drop off Boo and headed down the A12. (Not before picking up some sandwiches for the journey!) I didn’t last long out of the house before flexing!!

As soon as we arrived, our wonderful hosts Chris and Anna popped a bottle of fizz and we spent so long nattering and catching up that we barely had time to get ready, let alone get the picture I had promised to show my progress! Another sorry coming your way!

The meal actually wasn’t too bad, as you can see 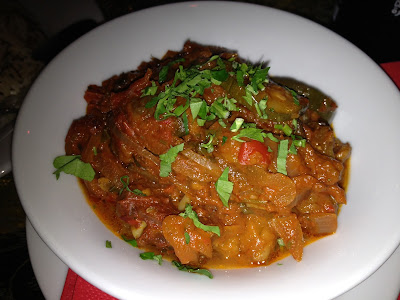 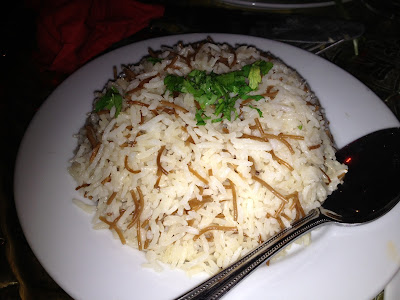 The real flexing began after dinner, with more fizz, and then when we were back at Chris and Anna’s, I was introduced to an Espresso Martini…. 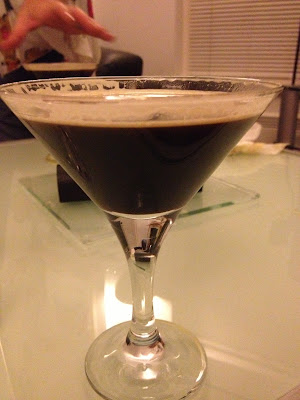 Looks quite harmless doesn’t it? That bad boy harbours a frankly, quite scary, 8.5 syns of alcohol, and I put away a few more than one! Damn they were good though! A double vodka, a shot of Kahlua and a shot of Espresso. Delicious and lethal, as all you can taste is the sweetness of the Kahlua and the coffee!

I didn’t feel too clever the next day, but we had to head home and pick up The Boo. Hague had already said that he couldn’t be bothered to make anything and that he’d pick something up on the way home, and so I did the same. Flexing those syns to the max with a ready meal of macaroni cheese and some tiger bread. And a cheese sandwich. And 2 packets of Reese’s peanut butter cups. I wouldn’t even know where to start with counting those syns. However, that was the end of the weekend, and the end of an outrageously overly sinful (but wonderful) weekend!

Monday dawned, at 4.20am when my alarm went off. I hate earlies at the best of times but when you’ve not been at work for six weeks it seems all the more painful to drag yourself out of bed at that time. The wonderful Hague had prepared my breakfast and so all I had to do was get up, dressed and out.

However, when I arrived at work, I was told we had a brainstorming session and that we’d get breakfast free. For most people this isn’t a problem, but I really fail when it comes to saying no to a cheese toastie from our canteen. They use big thick doorstops of bread, covered in a gooey, mayonnaisey, cheese and onion topping. They’re gorgeous! 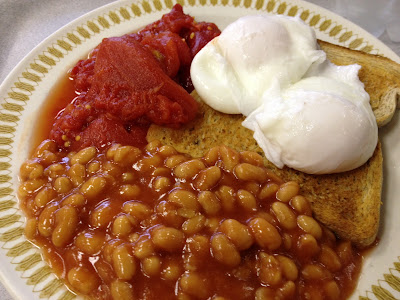 As you can see I resisted though, and had a slice of wholemeal bread for 5 syns, poached eggs, chopped toms and beans to make a low syn breakfast. It was quite nice to be back in control again to be honest.

When I got home I was so tired that I only managed to get as far as the sofa. Hague made me a lovely cuppa and then dinner. I followed on with my theme from yesterday with a big bowl of cheesey pasta, but this one was on plan :o) 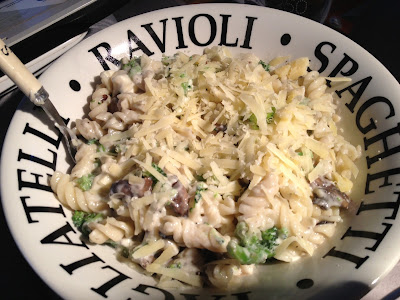 I then got put to bed at the rather early, but much needed time of 6pm, so you can see why I didn’t quite manage to blog yesterday!!

Hopefully I ate enough, as with being so tired, I pretty much eat and head to bed! Same goes for today! I had a 12 hour shift today, so as I'm sure you can imagine, I'll just give you a quick overview of my nommage, as I have to head for the shower and bed once more!

So here we go with today, and that makes me square with my blog again!

As I'm sure you can understand, I don't have breakfast before work when I leave the house at 5am. I can barely open my eyes at that time, let alone eat, and so I usually take my food into work. Normally I just have a snack during my first break, and that was the case today. 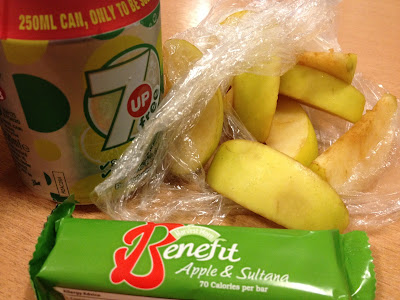 The Benefit bar was synned (3) as I had my muesli at my next break :) 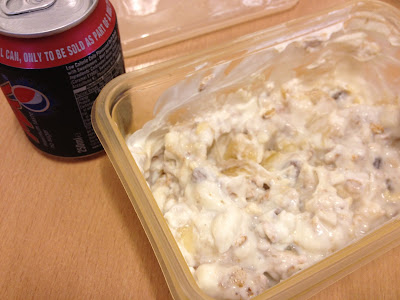 It's my staple when I'm on earlies, as it's lovely and filling, and can be done the night before as then the muesli soaks up loads of the yogurt. Delish! It has some sliced banana in too. As I was on a 12 hour shift today, I had to take in two meals, and luckily I still had some of the Youvetsi left that I made the other day, and so that did the job perfectly. 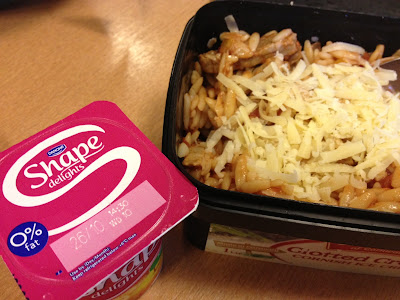 Along with a cheeky crumble yogurt (1/2) it kept me going through the tedium of being an extra person, an extra person who wasn't actually needed, but there you go, I'm home now!

When I finally got home at 6.30pm, Hague had dinner ready for me, he's a lifesaver for a shift worker, he really is. I'm so lucky to have him :) 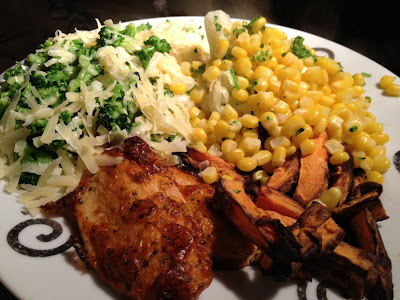 A huge pile of sweet potato chips, Quorn sticky fillets, sweetcorn and broccoli and cauliflower cheese greeted me, and was happily washed down with a cup of tea.

So there you have it, a bit of a whirlwind of a blog, but now you're fully up to speed with what I've been up to for the last few days! I'm afraid my Reasons are missing, as I'm too tired to think tonight, but they shall return tomorrow as I start to get back to normal! Oh, and I had to miss weigh-in today too due to my stupid 12 hour shift :( That 4 stone sticker shall be mine next week (if I can weigh in early as I have another bloody 12 hour shift next Tuesday :(