It's that time again, and Hague has headed up North to see his boys, leaving me and The Menagerie to our own devices for a few days. It did mean an early start as his train was at quarter past 7 in the morning and so we were up at 6.30 *shudder*

With Hague safely delivered at the station I came back home, hoping to get plenty more sleep, but nope, I stayed awake and so gave up after an hour and came downstairs. Now, as you may already know, when Hague is away, I get the chance to catch up on "my" programmes which get safely stored on the Sky+ box for just these weekends. So I made myself a cuppa, and had a banana whilst I caught up with The Great British Bake Off.....perhaps not the best programme for someone losing weight, but never mind.

After I'd tortured myself watching teacakes, crackers and gingerbread being cooked I decided it was definitely time for breakfast! 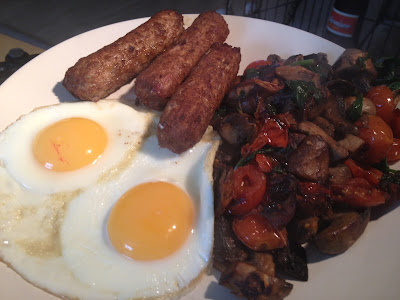 Syn free and just what I wanted. After filling myself up nicely, it was back to the Sky+ box to catch up on Come Dine With Me. I know, I'm a glutton for punishment! I also managed to squeeze in a viewing of The Hunger Games. (I'll have square eyes by the time Hague gets home!).

I really didn't know what I fancied for lunch. I spent ages wandering around the kitchen, not knowing what to eat, but in the end I spotted a packet of instant mash and I was decided.... 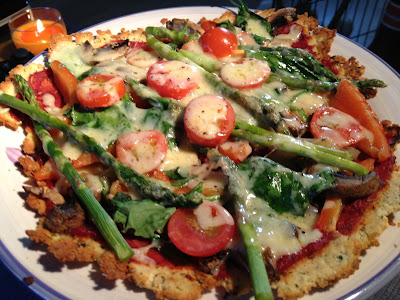 Mash pizza, topped with tons and tons of superfree veggies and both my HeA's of cheddar. Totally yummy :) It couldn't be easier really, a packet of instant mash, with some added mixed herbs and garlic, with water added very slowly until it's dough like. Then the mixture is spread out on a baking tray and cooked until it's browning on the edges. Then turn it over and cook for 5 more minutes, spread with some tomato puree and top with whatever goodies you want (make sure you have lots of superfree). Very pizza like and filling too. Didn't stop me needing some of my infamous rhubarb crumble yogurts after though!

Once lunch had gone down I went for a lovely long soak whilst I listened to the football - the less said about that the better. I then spent about an hour texting a wide range of friends who'd suddenly decided to text me. It's quite a challenge juggling conversations about topics varying from your 6 year old Niece's new shoes, the disappointing football score and the pros and cons of camera lenses.....that's multi-tasking in action right there :)

The evening blurred by in a haze of Come Dine With Me episodes, including one recommended by my Mum, and which was truly the funniest week I've seen. If you've not seen the recent Salisbury episodes, get thee to 4OD!

I had no idea what to have for dinner, I knew I had a HeB left, but today has obviously been one of those days when I just don't know what I want. Well that's not strictly true, I wanted a big bowl of fresh pineapple and strawberries. I have neither, and so settled on a banana, apple and 2 cereal bars. A poor substitute, but it will stop me waking up hungry, which is the point. 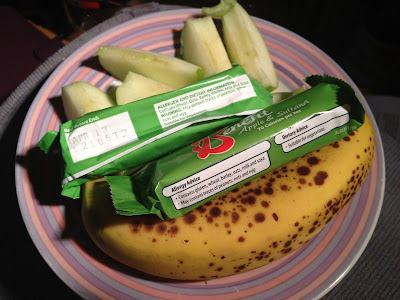 I'm not too concerned about the low syns, I still have Thursday to compensate for. Don't forget to join me tomorrow for another enthralling day of watching TV :) I might break the monotony for you by going to see The Parentals, but no promises!