Do I really need to tell you about today? I think I can safely just refer you back to either yesterday or Saturday for you to get a flavour of what I've been doing today :) In fact in some ways today was worse as I didn't wake up until gone 3pm!!! I'm blaming FlumpyCat as I had such a bad night with her upstairs I obviously needed the sleep. I had JadeyPuss up with me last night and she was a much better bed fellow, in fact it was lovely to have her with me as she just snuggled into my chest and slept. Lovely :)

It seemed a bit silly to have breakfast as it was so late - and we have no eggs -so I went straight to lunch. I know it has no superfree, which is very naughty, but wait until you see dinner! 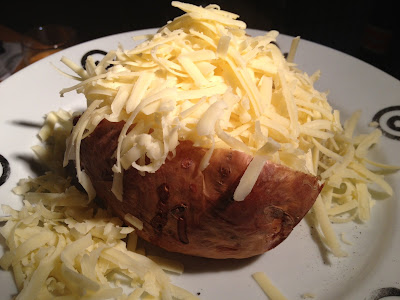 There are four Laughing Cow extra light triangles hiding under that mountain (60g) of cheddar!

Whilst the potato was cooking, I decided to have a bit of an experiment with the slow cooker. I have a cupboard full of veggies after winning the raffle at group last week, and us stocking up so I threw tons of it in a slow cooker with some tomatoes, baked beans, vegetable stock and herbs. There was TONS of it! As it was off the cuff, and I had no idea how it would end up I wasn't sure if it would end up as a stew or soup.... 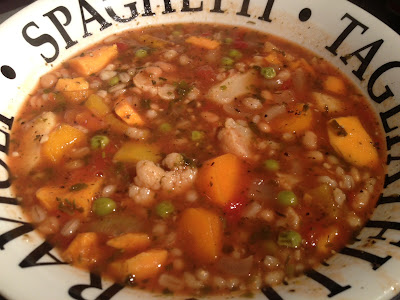 I'm calling that stew! Are you ready for what was in it? I think you might forgive me for not having superfree with lunch...*takes deep breath*
Onion
Sweet potato
Parsnip
Carrot
Pepper
Cauliflower
Spinach
Peas
Garlic
Chopped tomatoes
Baked beans
Ginger
Dried Rosemary and Thyme
Stock
Pearl Barley

I think that's it :) I left it in the slow cooker on high for about 3 hours and it had thickened up really well, and I have two huge portions left for another day. I was pleasantly surprised at how nice it tasted too.

I finished off (after seconds) with a couple of rhubarb crumble yogurts and I'm now utterly stuffed, with just a bit of room left for a hot chocolate before bed!

Free Food
potato
ingredients of stew (just up there..didn't see the need to copy and paste!)

I had a rather wonderful surprise tonight from Hague as well. He's had another few hours with his boys today, and he sounded so happy when we spoke on the phone, but then he messaged me a picture out of the blue. 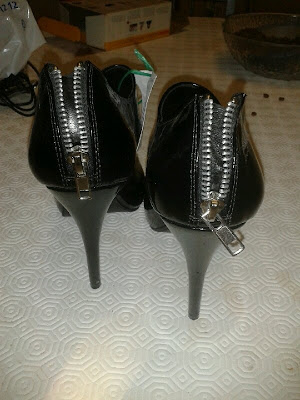 He's bought me a pair of shoes! Isn't he just wonderful? So today hasn't been totally boring and predictable at all, not really! He's home tomorrow and I can't wait to see him (and my shoes)! It's weigh in tomorrow too - I'm rather nervous about this week. I'm not sure I've lost as I've had such a hungry week, an on plan (mostly) week, but a hungry one nonetheless, plus I'm still recovering.....watch this space (and keep your fingers crossed for me please?)
Posted by Unknown at 22:55