Apologies For The Delay!

I know this blog is approximately 13 hours later than normal, but I managed to crash out as soon as I got in last night, so no blog!

Yesterday started off pretty normally, with a lot of sleep and no idea what to have for breakfast. In the spirit of doing as little as possible I decided on a jacket spud. 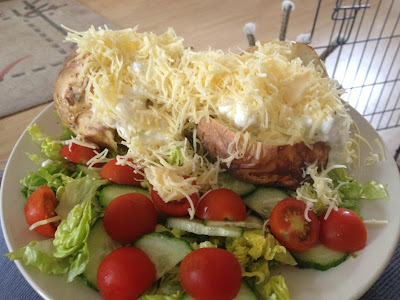 I lavished both my HeA's of cheddar on top and had some fat free cottage cheese too, it definitely filled me up, but as we were meeting up with some friends Hague sent me for a nap once it had gone down.

I did plan on using my syns on some alcohol, and I did have some alcohol, but as there was a buffet - and I'd  only had one meal I succumbed to the buffet...Ooops.... 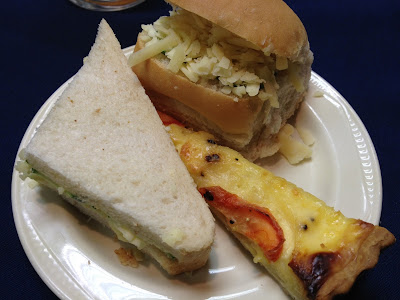 To be fair, my first plate was MUCH healthier, with two wholemeal sandwiches and a wholemeal roll, although the very fact that I had two plates wasn't great I guess! So along with 5 measures of Jack Daniels, that's a whole lot of syns :(

Just a few hours spent with friends, mostly doing nothing but sitting and talking left me absolutely shattered and so when I got home, I headed straight to bed. Although I did take a couple of benefit bars up with me as  I've been waking up hungry - they didn't last long though, and I sparked out within half an hour....hence this blog being rather late!

So a flexi evening for me, but hopefully me being good for the rest of the week will mean the damage is minimal, besides, I'm still recovering as the huge amount of tiredness proves.
Posted by Unknown at 13:37