Yep, two blogs in one day :) Yes, I know this is due to me being so slack yesterday, but I'm trying to spin it into something exciting!

For once I've actually managed to fit in three proper meals, quite an achievement seeing as I didn't get out of bed until gone midday again, and it's only 10pm now. Strangely enough they have all been appropriate meals for the time eaten, and it's been a hell of a long time since that's happened!

So here goes, and I shall admit now that Hague has cooked everything for me today - cos he's just bloody marvellous like that (and he's abandoning me all weekend)*

I really fancied something with eggs in this morning for breakfast, and left it up to Hague to choose what I'd have so he chose one of my favourite breakfasts (how good is he? Seriously?) 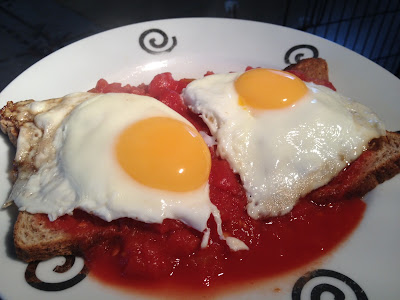 Yes I know that bread is starting to creep in slightly, but it's not becoming the staple it was before, and let's be honest, you just can't have chopped tomatoes without it, the meal is too liquid! Besides, you have to dunk something in eggs. It's the law.

In the spirit of a hungry day, which I've been having a lot of lately, it wasn't too long before I wanted something else to eat, and as it's cold soup seemed perfect.

I had an idea that a roasted veggie soup would be nice, and so I utilised my raffle winnings from group (a bag of fresh veggies) and picked out the sweet potatoes, parsnips and carrots. Hague roasted them off with an onion and some thyme and then blended them with some stock. 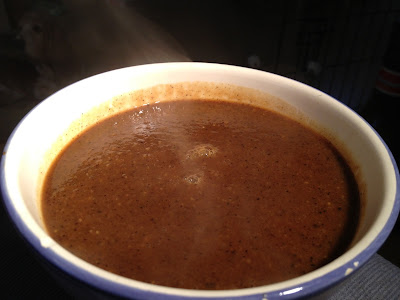 It tasted okay, I think next time I'd leave the thyme in when the soup was blended, and maybe roast the veggies for a little less time. It's not a recipe I'll give up on though, as the basic taste was there, so watch this space.

In other news, the worlds of FlumpyCat and JadeyPuss are very slowly starting to get closer for longer without little girly cat spats. 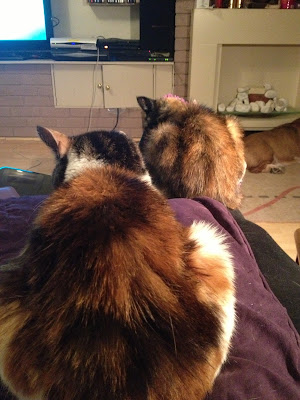 Unfortunately this DID end in a girly cat spat, but not for quite a while, so things are definitely improving :) As I've been feeling so hungry, dinner was a big ol' bowl of cheesey pasta. 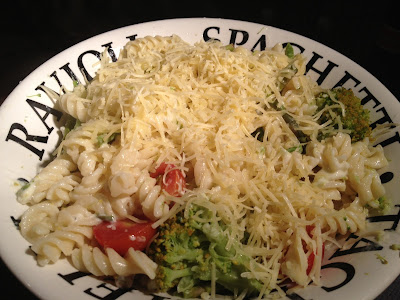 There are actually quite a lot of veggies hiding in there, half of a head of broccoli, some asparagus and cherry tomatoes, plus a tub of LowLow AND 30g of cheddar, I was in the need for cheeeeeeeese lol! Despite such a huge, filling bowl of food I still found room for dessert, and polished off the last of the grapes :)

I guess I'd better get my butt to bed before I start eyeing up something else to eat!

*When I say "abandoned", I mean that Hague is going up to Barnsley to see his boys, which means that I get to own the TV remote and spend my time sharing the sofa with The Menagerie :)
Posted by Unknown at 22:20