For once, it's not my fault that I was awake practically all night. No, really it wasn't. It was Stephen King's fault. I'm reading 11/22/63, and I literally struggle to put it down! So I was still awake at 7am! I dragged my tired self out of bed at about half 1 and managed to get as far as the kettle to make a huge cup of tea before vegging out on the sofa :)

A couple of cuppa's later and I realised that I really did need to eat. Luckily, as always, Hague had made a couple of cous cous quiches, and so that was a minimal effort meal which certainly did the job for my brunch. 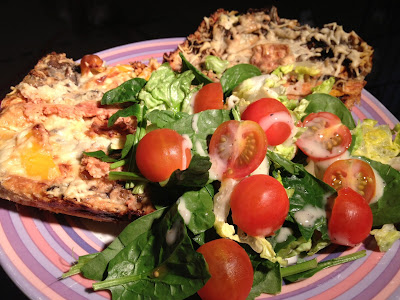 The salad was just tomatoes, lettuce and spinach, topped with some Kraft fat free Italian dressing. It's my dresing of choice as it has a lot of flavour, and so you don't need a ton of it to add a nice, garlicky taste to your salad. Oh, and I have no idea why I'm suddenly in the mood for salad when it's grey and miserable....I followed it up with a couple of rhubarb crumble yogurts as well, as I had a need for something sweet. Although my penchant for the rhubarb yogurts now means I have 5 of the apple crumble ones in the fridge. Oops ;)

As I've been trying to think of different things to try, I asked my Mum for a couple of Cypriot recipes that I could adapt to make them Slimming World friendly. Today I thought I would give Yiouvetsi a try. The original is a type of pasta bake, made with lamb and a Cypriot pasta which looks like rice before it's cooked, topped with lots of cheese. Obviously, I swapped the lamb for the new Quorn lamb strips, and removed the half cup of oil the recipe wanted. I also added in some extra veggies....in fact, I was going to top it with some aubergine to make it a sort of yiouvetsi/moussaka hybrid, but I got as far as slicing the aubergine, spraying it with frylight and putting it in the oven to cook off slightly......I only remembered those when I put the rest of the yiouvetsi in the oven, when they were black. So, here you have a, closer to the original than planned, yiouvetsi! 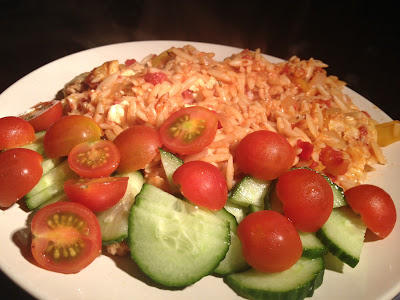 In a pan I fried off the chopped onion, garlic, chopped pepper and Quorn lamb. In another pan I cooked the pasta. I added the chopped tomatoes to the lamb and vegetables, and then about half filled the can with boiling water and added a stock cube and poured that in too. I added in a healthy shake of oregano, and just a small about of rosemary, seasoned and let it simmer whilst the pasta cooked. (Of course, you could also slice an aubergine and leave it to burn in the oven as well if you want...)

When the pasta was cooked I drained it and mixed it in with the tomato/lamb mixture and then poured it all into an oven proof dish. I added in the feta (HeB and 3.5 syns worth, I was feeling decadent), and topped with the cheddar. I then put it into the oven (200 degrees) for 14 minutes. It was nice to have something different, and it tasted delicious. I still have about half of the lamb and pasta mix left, ready to have cheese mixed in and bake when I fancy it again. I'm sure you could substitute any small pasta, but obviously the orzo would work best. 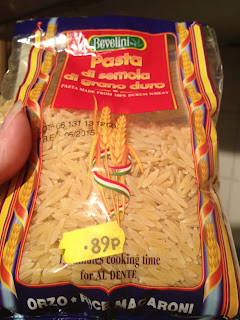 Dinner left me stuffed, and as I had a crappy night, I'll be having an early one (for me) tonight. So just a cuppa to round off my evening - I'm so rock and roll it hurts!

I'm not expecting to get a chance to blog tomorrow. Me and Hague are heading down to London, for an evening of friends, food and Soho! I can't remember the last time we hit the town and so I'm really looking forward to it. I'm also hoping that people I've not seen since Spring will notice my weight loss :) So if I don't get a chance to get online, I shall tell you all about it on Sunday (hangover permitting)!

Reason #13
Bras. Now, you might be wondering what my problem is here, after all larger size bras are now very much in the mainstream, with Bravissimo and Katie Price amongst others doing their best to cater for the larger lady, in both back and cup sizes.
Well, yes, yes they are. The problem is that if you are fat, you are supposed to have big boobs. So most places that have bras in the larger back size that I need (my starting underbust measurement was 50"), also start at D or larger cups. However, I missed out on that one benefit of being on the more rotund size. I have teeny boobies. I need a bra with a big back, and a small cup. You try finding one of those, even if you find one, most of the time they don't fit properly, it's seriously one of the main issues I have. I can rarely find a comfortable bra.
At least when I get to my target weight, I'll have a fighting chance of being able to try on bras in a normal shop to find one that fits eh?