I had a ridiculous amount of sleep last night, I decided on the dream combination of ear plugs and a sleeping pill, which knocked me out for over 12 hours - quite impressive eh? I really need to get back to a more normal sleeping pattern as we are now less than a week away from my return to work, and that won't allow me to sleep all day!

Getting up so late meant that I just about had time to shower before weigh in, so I didn't have time to eat! Never a bad thing! Not that I'm advocating not eating all day!! I didn't get quite get the result I wanted, but I shall never moan about a loss, and a loss I had. Two whole pounds have gone this week, so I've now lost a total of 3 stone 13.5 lbs. Yep, I'm just 8oz away from my next award! Under normal circumstances I'd be pretty positive about managing that next week, but with a girls lunch on Thursday and a weekend with friends in London, it might be a bit of an ask, but believe me, I'll be angelic the rest of the time to give myself the best  chance of achieving that next award :)

When I got in, dinner was already done, thanks to the wonderful Hague - cheesey wedges and leftover curry. Lovely :) 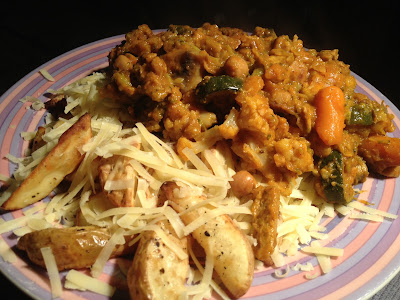 With dinner eaten, it was time to head out to see some friends. The evening had been promised to be very cake-laden and it most certainly was, with coffee cake, lemon drizzle cake, almond slices and a pineapple upside down cake. Eek! Dangerous ground for a dieter, but I was pretty damm good (well, I think I was). I only had ONE slice of cake! 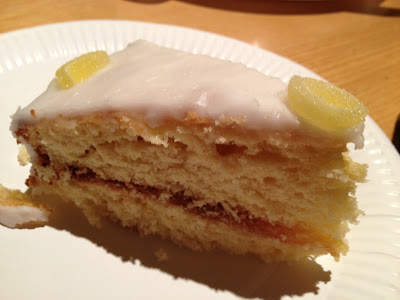 It wasn't a huge slice either, and seeing as according to the SW website, a slice of lemon drizzle cake from most of the supermarkets comes in at around 12-13 syn, I'll syn it at 15 and not feel guilty. In fact I felt positively angelic until I remembered that I'd had a mincemeat parcel and some 2 syn Baileys at group so I have gone slightly over my syns today! Guess I'm starting the week as it intends to go on. Whoops!

When we got in, I was hungry, must be all the willpower I used, and so did myself some eggs and chopped tomatoes on toast, which I managed to wolf down before I realised that a picture was required. I'm sure it's not hard for you to imagine a couple of fried eggs on toast though is it? :) I managed to torture myself a bit more as I also watching the final of the Great British Bake Off. I'd managed to avoid Twitter and Facebook as we were out so the winner was a surprise too. I'm really going to miss that show :( At least I won't be teasing myself with cakes once a week!!

Healthy Extras
A - 45g of reduced fat cheddar, 250ml of semi-skimmed milk
B - 2 slices of wholemeal bread from a 400g loaf

Not the greatest day syn wise, but tomorrow I'll be very low syn, as will be the case for the rest of the week (when I'm not lunching or weekending in London). That's the plan as I really do want that 1/2lb, although with a return to work and such a busy week, it might be more realistic to look at a fortnights time, but who knows?

Reason #10
Blimey, double figures already!
Stockings/Tights. Do you have any idea how hard it is to find stockings or tights to fit if you have HUGE thighs? It's nigh on impossible, and when you can find them you are pretty much limited to plain black or nude tights, or plain/fishnet stockings. That's it. But I want stripy tights, in a rainbow of colours, I want to be able to buy the cheap and cheerful version on Ebay. So that's yet another reason, my adoration of stripy tights!
Posted by Unknown at 01:17