The Weekend At Last!

Much as I hoped and had everything crossed, a lie in was not to be this morning, and so into work I headed just after 5am :( However, we were out just after 8.30, and so I was back into bed before 9.30 - so not so bad)! Luckily I did eat at work, I took in some fruit and Harvest Morn bars and devoured those whilst I was there, which was rather a good thing as I didn't get out of bed again until half 12! 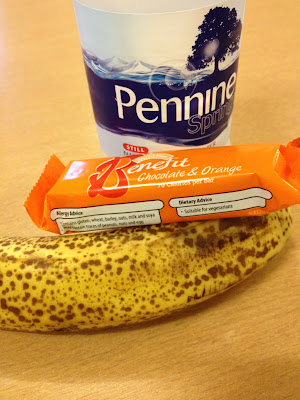 More by good luck than good management that meant we were up in time to watch the West Ham game on the television, another win, and another (yet another shameless plug alert) article published in the Blowing Bubbles fanzine . For some reason I decided that the only fuel I needed for the game was three huge cups of tea, and that could be part of the reason for me needing to go back to bed for a nap!

I only had an hour nap though, as we had to get the shopping. Which is starting to get stupidly expensive, nearly £50 for, quite frankly, not a lot of food at all. To be honest, I'm starting to get concerned about how we're going to be able to afford to eat soon! Coming soon to the Slimming World Files....how to live on nothing but spuds O_o

Anyway, enough whinging, when we got in, the first thing on my mind was most definitely dinner, as (as you may have noticed) today's food blog has been rather light on actual food. I wanted something that I wouldn't take much effort and as it's a Saturday I fancied something take-away esque and so settled on a curry. 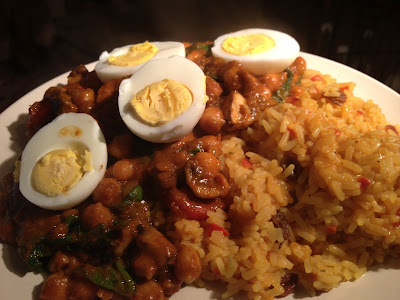 All syn free, and to be honest, it's pretty much a curry loaf deconstructed. I cooked the eggs, and then left them to one side whilst I cooked the savoury rice. When the rice was cooking I fried off some mushrooms, cherry tomatoes and spinach and then mixed in a tin of Asda chickpea dahl. When the rice was cooked I served it all up. It certainly calmed a curry craving and when it's syn free it's all the better! After such a filling dinner I waited a while for my dessert, and it was worth that wait. 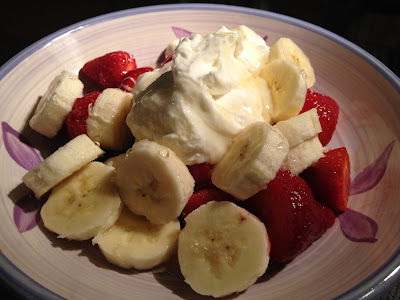 It looks so naughty doesn't it? But the only syns are for the tablespoon of honey drizzled on top. I really do like fat free greek yogurt for a topping on fruit, it's so much thicker than standard yogurt. It's certainly rounded off my day nicely! Well, except for the Options hot chocolate I treated myself to before bed :)

With a bit more time on my hands tomorrow, I'll be trying out something new, and hopefully eating properly again! Nights next week, so food will definitely vary a bit more (I promise)