I had an awful night last night. I seem to be stuck in a bad situation where I'm SO shattered during the day that I have to nap, have to, or I'll nod off on the settee. This then leaves me in a state where I go to bed at around midnight, very tired and I fall asleep - but then I wake up stupidly early....which leaves me so tired I need a nap. Gah!

Today I woke up at 7am, after about 4 hours sleep. I tried desperately to go back to sleep but no luck, this wasn't helped by the fact that I woke up really hungry. I gave up the ghost at 10 and made myself a huge cuppa and had a soak in the bath. I'm taking the hunger as a sign that I'm getting better, as I've not had much of an appetite recently, I just need to react to it a bit quicker as I didn't get around to eating until around 1pm! 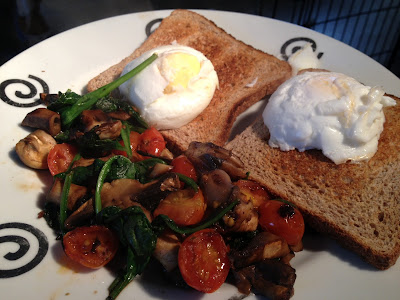 It was a rather yummy breakfast though :) Hague wasn't feeling too great himself, but he still made my breakfast for me. He's rather bloody wonderful. As the bread was a tad more than 60g (closer to 80g) I'll allow 2.5 syns for it, but apart from that it was syn free.

As I've mentioned, napping has once again become a way of life so I headed upstairs in the afternoon, but ended up feeling worse - always the problem with napping, it's almost Russian Roulette sometimes! We had to go shopping as well, so off we headed. Unfortunately a simple shopping trip was enough to show that I'm still a way off of being back to normal as I ended up feeling awful halfway around Asda! I guess I need to really concentrate on looking after myself properly, getting 3 meals a day, not the two I'm fitting in at the moment. It doesn't help :(

Anyway, as we now have potatoes in the house (yay!) dinner was a nice jacket spud which has totally stuffed me. 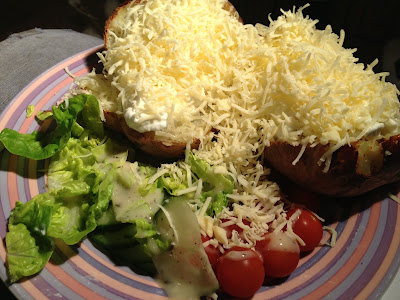 I know I'm a bit low on syns, but I had planned to have a lovely bowl of Eton Mess for dessert, but as I'm still totally full from dinner I might just save that little treat for tomorrow.

In other (totally un Slimming World related) news, the world of The Menagerie is becoming slightly easier. JadeyPuss and FlumpyCat have moved on from their hissy fits. Yesterday heralded a highly amusing bout of paws at 10 paces which was followed by this..... 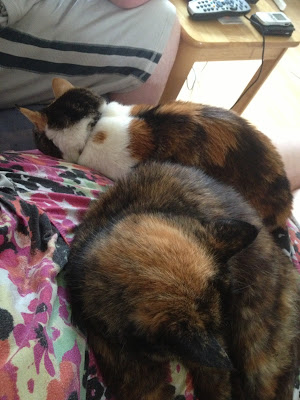 Okay, so it only lasted for 20 minutes or so, but that's progress. So the house may be full of plague, we may have no money, but at least the cats are finally getting on ;)