Can It Get Any Worse?

I'm trying so hard, I really am. I'm trying to gee myself up, kick myself up the arse and pull myself together - however, it's now another day along and I'm now signed off for the rest of the week, on antibiotics and officially 4lb heavier than I was last week *sigh*

Still, I will be sticking to plan today, and just hoping that once the antibiotics have kicked in, I'll see the loss next week, after all, despite some beers my weekly syns were well under 100 in total, so it shouldn't have caused that much damage, BUT there is no use crying over spilt milk, or indeed gained weight, so onwards I shall go with my journey, and onwards I shall push to my 3 stone award.

Breakfast today was actually breakfasty rather than being brunch! Which made a pleasant change. Muesli with yogurt, banana and apple. Scrummy :) 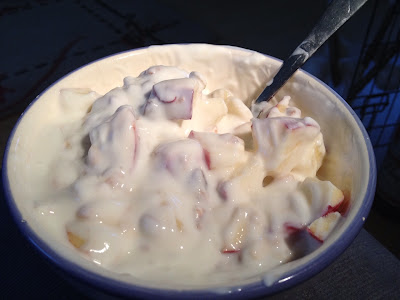 The Dorset Cereals Simply Fruity muesli really is rather lovely as well, and you can have 40g for your HeB. As I've been feeling on a bit of a downward spiral (and have been off work for over 7 days) I needed to visit my doctor. He was pretty good, and pressed me for any other reasons that could have caused such a bleurgh week, and on discovering I was suffering from a wee bit of an infection, prescribed some tablets and suggested that it could be that making me feel so run down and miserable. Here's hoping that in a few short days I'll be feeling much better eh?

As the doctors were running late, and I had to pick up my prescription I couldn't stay to SW class tonight, as I've said, I gained 4lbs. I'm really not sure why. I've looked back over my food and yes, I've had beer, but my syns have been okay for the week. I can only blame it on feeling so icky, and as such, hope that sticking more properly to plan this week will yield results.

When you're feeling sorry for yourself, only comfort food will do, and how's this for a big ol' plate of just that? 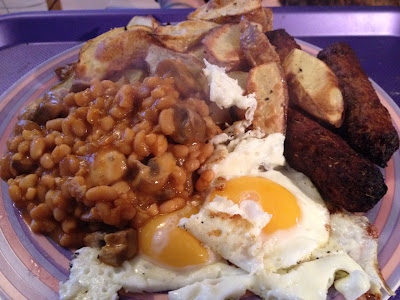 A mountain of wedges, some Linda McCartney sausages, eggs and baked beans mixed with mushrooms. SO filling and it really hit the spot! However, after an hour or so I needed something sweet, and so treated myself to some syns in the shape of rhubarb crumble yogurts. I'm truly addicted! I had an apple as well to get some more fruit down me, and when I haven't had any Healthy Extras, a glass of milk is something of a treat too. 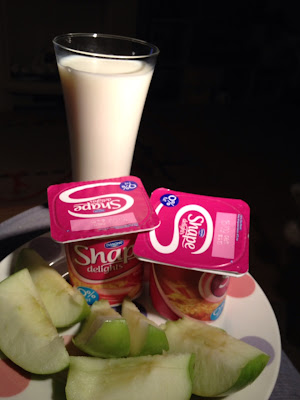 So I am now fed, and am making peace with my weight gain this week. It won't throw me off plan though, that I know.

So another day low on syns, lets hope I reap the rewards next week eh?