We didn't have any plans for today, beyond having a lie in, so the whole realm of possibility was spread out in front of us. Sort of. As always money is tight, but when your local football team has a Bring a Friend Day meaning that two people can get in for a fiver, it's rude not to go. Especially when you've been planning to pop along for ages!

First things first though, as we were going to be out for a while, a lovely big breakfast was a must! 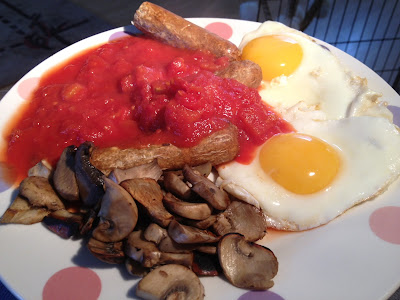 With breakfast demolished we headed out for the football ground, walking of course and we covered the 1.6 miles in 38 minutes - not a bad bit of body magic seeing as I've been hideously slack this week! When we arrived we discovered that lower league football is actually quite refined and you can drink whilst you watch the game. Add to that the fact that we won second prize in the raffle of £10 and it was an all round good call to go and see The Bloaters today (even though they undeservedly lost 4-3) 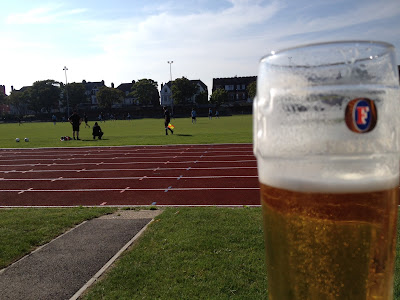 Great way to watch football, not such a great way to keep on plan though.....especially not when followed by another pint. And a bottle of Sol. Can you say flexi day (again!).

When we got back (1.2 miles - 22 minutes), we were both pretty hungry and Hague made the decision on dinner, so jacket potatoes it was. 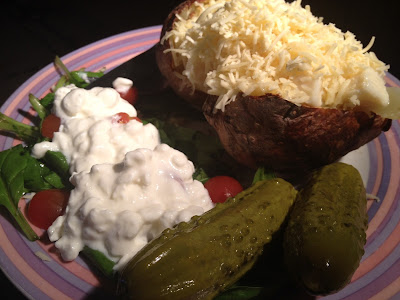 I stuffed mine with 6 Laughing Cow extra light triangles and 60g of cheddar, on the side I had some spinach, tomatoes, cottage cheese and gherkins. SO cheesey! After dinner we didn't have too long as we were heading out to see Waterlitz, part of the annual Out There festival in Great Yarmouth. It's something that happens every year, and involves all manner of alternative performances, street art and all sorts of everything. We normally manage to miss most of it, but when you hear about a 20 metre high man made of shipping containers more or less on your doorstep, you sort of have to go along don't you?

That was just what it was doing whilst we waited for it to start. The show involved all sorts of everything included Pterodactyls, fireworks, glitter, flying Polar Bears and music. Wonderful and I'm glad we went out to see it!

A cup of tea was in order when we got in as it was a bit chilly out, and then to bed as we have an early start tomorrow as we're heading to Barnsley. I have some bits prepared, so should be able to have a day on plan after today's excess of beer/syns!

Ouch, few too many syns once again, so I'll do my best to stay low syn tomorrow as I REALLY want to lose just 1/2lb on Wednesday!