I was rather grumpy last night, having to work on a Friday night is never good, but when it seemed so likely I wouldn't be in, to have to work just gives me the grumps....however, we were only in for just over half a shift, which meant I was home before 3am. I didn't sleep until about 9am, but that's another story!

Dinner before work, was something quick and simple for a change (!). Some super noodles, veg and quorn sticky fillets. 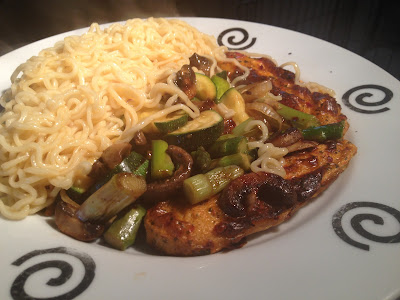 Sweet chilli noodles, and the sticky chilli fillets, along with stir fried veggies really worked. Lots of flavour and as always minimal effort :)

Despite the chance of getting away early at work, I've been stung by not taking in enough food before, and so took in a full lunch. Another of the mashed potato based quiches from earlier this week, some cereal bars, an apple and yogurt. As I've said, we were only in for half the shift, so only the apple and cereal bars got nommed ,and I had the rest when I got in.....and so now, dear blog readers, we can return to a more normal schedule of my day's blog published in the evenings!

Healthy Extras
A - 30g of cheddar
B - 2 Harvest Morn bars

And so onward to today, Saturday. The first day of a wonderful week off - a chance to relax, and to try out some more interesting recipes (at last, I hear you cry!). As I didn't get to sleep until about 9am, I really did have to be dragged out of bed at 2.57pm - I couldn't possibly miss the first game of the season, West Ham have been promoted and I just had to see Soccer Saturday! So breakfast, yet again, wasn't eaten until around 4pm. 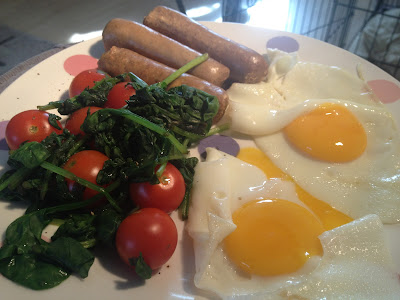 As we were going shopping after the footy, I decided to use up the last of the veg in the fridge, so whilst the eggs were frying, I just put the tomatoes and spinach in a pan with some frylight and pepper and let them cook off for a few minutes. A bit of a change from tinned tomatoes, and I rather enjoyed it.

With a fully stocked cupboard after an Asda visit, the world was my oyster, and so I decided to try something out that I'd seen on one of the facebook SW groups. Burgers with mushrooms instead of buns - win-win as far as I'm concerned, no HeB used, and more superfree! Fabulous! I had mine with wedges and coleslaw to give my meal a BBQ feel. Rather apt for such a beautiful, sunny day :) 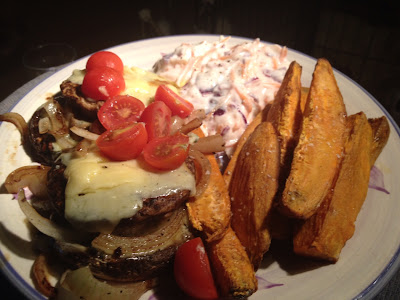 I chopped the sweet potatoes into wedges and then coated in frylight and BBQ frylight before putting them in the oven. Then I put some garlic into some big mushrooms, sprayed those in frylight and in they went to join the wedges in the oven.
Then I sliced an onion, and put that in the same pan as my Quorn burgers and let them cook slowly.
Whilst they were cooking, I made the coleslaw using a coleslaw vegetable mix from Asda, some fat free yogurt, mayonnaise and lemon juice.When I had mixed it I gave it a taste and thought it was okay, however once it had been left for 15 minutes or so it tasted much better, the yogurty flavour had retreated and it had more of the taste of the lemon and mayonnaise. Once I'd done the coleslaw, I measured out some Stilton and put that in the mushrooms and put them back in the oven. Then, when the burgers and onions had cooked, they went on top of the mushrooms and stilton, and were then topped themselves with 30g of cheddar. Once the cheese was melted, dinner was ready!

After dinner.......all hell shall break loose. Myself and Hague have decided that it's been way too long since we've had a drink, and therefore much vodka (and therefore much synnage) shall be passing my lips this evening. However, as you can see, my meals have been on plan, and I shall be mixing my voddy with diet mixers and so rather than a flexi day, it's just a liquid flexi night :) If it shows on the scales on Tueday - so be it. As I've said before, and I shall say again, life is for living, and whilst we may not have the money to go out for meals or pub crawls, every now and again we like to kick back with a movie night and get a wee bit drunkled, and much as I'm determined to lose weight, I'm also determined to enjoy my life, and tonight, I shall be doing just that :)

Happy weekend everyone - enjoy the sunshine!

PS If you happen to be a West Ham fan, a football fan, or just like the witterings of yours truly, feel free to take a look at my first published article :) http://issuu.com/blowingbubbles/docs/issue1#download