Summer is not an easy time to try and lose weight for me. My entire family were born in the Summer months so from June 5th until today it's one birthday after another! Today was the last, my Dad's, and so we went out for a rather lovely dinner to celebrate.


As I'm working nights next week, and I was exhausted after the insanely stupid and painful early shifts, we had a long lie in this morning, and so we didn't have breakfast before we went out to meet up at 5pm.


I've had a lot of flexi meals and for each of them I've just eaten whatever I wanted from the menu, today, I had a bit of a different attitude and I tried to pick choices that wouldn't be quite so high in syns. 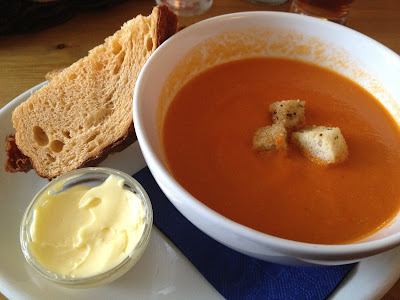 For my starter I went for the roasted red pepper and tomato soup. I didn't have the butter on my bread though, so for me, it was definitely a better choice than the other vegetarian option which was deep fried halloumi - which I would normally have opted for.

For my main, I had the choice of a leek and brie tart or mushroom, spinach and feta parcels. I went with the filo parcels, again as it was the better of the two choices, in fact I think the main would have probably been quite reasonable in syns as filo pastry is only around 3 syns a sheet. The feta was probably around a HeA or two's worth, and the potatoes weren't particularly oily, so not a bad pick really. 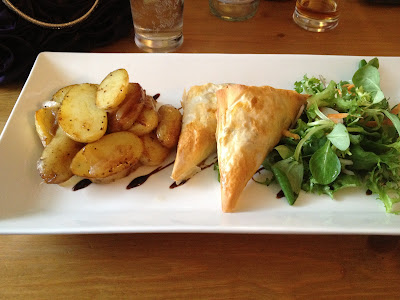 I'm sure the leek and brie tart would have been delicious, but it actually felt quite good to feel a little bit more in control of my meal. Until dessert that was - as soon as we walked in, and I saw the Specials Board, I knew I'd be having a dessert, I just wouldn't be able to resist..... 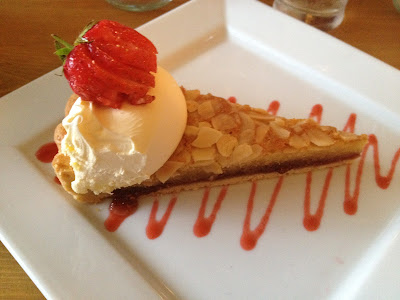 Raspberry bakewell tart with clotted cream......oh but it was GOOD. Besides, almonds? That's a HeB right there, and a super speed strawberry on top, it's practically a syn free dessert.....in my dreams, but damn it was good!

I have to stay up late tonight, to try and get into the rhythm for next week when I'm working nights, so I'll have a light snack before bed so I don't wake up utterly starving, probably just some scrambled eggs to ensure I stay asleep for long enough to stay up all night!

As I'm working nights next week, I won't be publishing a blog until Tuesday afternoon, as I'll only have one meal before heading to work, and then will be eating at work before sleeping - so there won't be any food to report before then. So normal service will be resumed on Tuesday :) See you then for the next stop on my Olympic food journey!